The Reincarnation of Benjamin Breeg 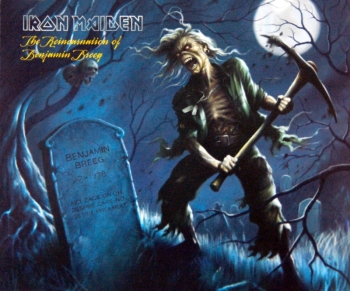 The CD single comes with a B-side of "Hallowed Be Thy Name" from the BBC Radio 1 Legends Session. Due to the overall length of the two songs, the single was not eligible for chart inclusion in the UK. The single was also released on 10" clear vinyl single, which includes BBC Sessions versions of "The Trooper" and "Run to the Hills" on the B-side.

Although both the sleeve, and labels, of the 10" vinyl state that it should be played at 33.3 RPM, this is actually incorrect. The correct playing speed is 45 RPM.

A promotional version of the single was released on 14 August 2006, featuring the full version and a shorter version called "edited version" in the US promo CD and "rock club mix" in the UK promo CD (both versions are identical).
On 17 July 2006, a music video for the song was put up on the band's official website for public viewing. The video was first released only for paid fan club members, but it was leaked within minutes and viewed by many fans who posted the link on various Iron Maiden discussion forums. The video displays them currently performing in the studio along with classic photos and clips of the band over their lengthy career.

The character
The single's promotional image shows Eddie (the band's mascot) digging out the grave of Benjamin Breeg, whose tombstone states "Aici zace un om despre care nu se Еџtie prea mult". This is a sentence in Romanian, which roughly translates into "here lies a man about whom little is known." The identity of the character is being held secret by band members. Steve Harris, in an interview featured on the DVD (with special edition CD album) was quoted as saying: "Who is Benjamin Breeg? Ah, now that would be telling."