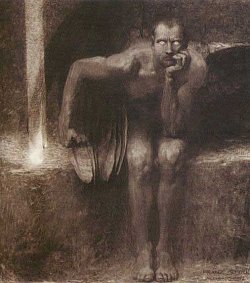 Lucifer. The Light-bringer. The Lord of Light. This song deals with this former archangel who, according to the legend, rebelled against God and was subsequently cast down to Earth. Being a fallen angel, he obviously doesn't see this "strange world" quite the same as the rest of us and wonders why humans are so blind "Nothing hidden still you fail to see the truth" and keep perpetrating massacres upon each other "Why the slaughter of the brotherhood of man".

Still according to the legend, Lucifer is supposed to be at the origin of all evil in our world, but the song makes us see our own lives through his eyes, highlighting the fact that us, as humans, are the ones responsible for this evil. There is even an appeal to us to change "Revenge is living in the past, time to look into a new millenium" although, from what he witnessed of his stay on Earth, "we are not worthy in [his] black and blazing eyes".

The sentence "all our sins to you we give this day" makes an interesting tie with another song that also deals with a demon residing amongst humans, namely 'The Fallen Angel'. Lucifer and the other demons are usually blamed for our low deeds. But it's all too easy to find scapegoats and put all our sins on them, so we can just go on and commit new ones. The chorus admonishes us to "free [our] soul and let it fly" (note that similar lines can also be found in 'Hallowed Be Thy Name' and 'The Thin Line Between Love And Hate') and to "give [our] life to the Lord of Light", as he seems to be the only one who can guide us "in this lonely promised land" after we were "cast out by our bloody father's hand" (i.e., God).

The last line "In our nightmare world, the only one we trust" sums up very well the state of the world since humans appeared on the planet, making each other's lives a misery and only trusting the symbol of evil that this Lord of Light traditionally represents. However, the meaning could be reversed and we could interpret the message of this song as a sign that we should trust science and knowledge, as this is what Lucifer stands for, bringing light to the civilisation and making it progress forward. So, let's not hesitate to metaphorically give our lives to this Lord of Light and try to make this world a better place by pushing back the remaining shadows that still plague too many people's minds.

It should be stressed that no one actually needs a god or a devil to satisfy his or or her thirst for knowledge. This commentary does not by any means encourage Satan worshipping, notwithstanding the fact that he is only a symbol and is quite unlikely to exist. We can all follow our own desire to learn and those who have had the same desire before us.

Glory and praise be with you, Satan, in the heights

Of the Sky, where you reigned, and in the lightless nights

Of Hell, where now, overcome, you dream in silence!

May my heart, one day, under the Tree of Science,

Rest close to you, at the hour when around your head

A new Temple will rise and its branches will spread!