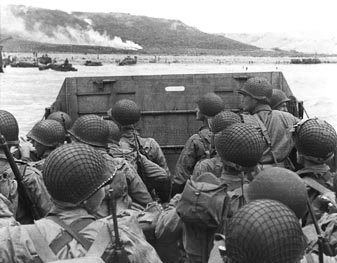 In the same vein as 'Paschendale', this fantastic war epic deals with Operation Neptune, the landings in Normandy representing the first step of a campaign code-named Operation Overlord (mentioned in the song) to gain a foothold on continental Europe on 6th June 1944. The music, along with Bruce's fantastic vocals, depicts vividly the approach of the landing crafts towards the beaches and the hellish confrontation of the invasion itself. Bruce's singing style brings up the crescendo perfectly until the explosive verses that make us visualise the fights on the beaches. Other parts of the song, and mostly the chorus, also evoke the slow progress of the troops and the listener can almost see those men dragging their feet in the sand in a painful and mortal advance towards the enemy defences.

Unlike 'Paschendale', however, 'The Longest Day' has some victorious and hopeful melodies intertwined with the harsh riffing reminiscent of the advance of the troops. Indeed, the landings in Normandy were, despite the horrendous human losses, a first step towards the victory over an evil regime that needed to be erased for good, unlike the battle of Passchendaele, which was a useless bloodbath that benefited no one. Apart from this major difference in the mood of the melodies and the aim of the battles, both songs are similarly grandiose and typical Iron Maiden epics.

The weather was a decisive factor for the landings and, whereas May had seen fair weather, the beginning of June didn't have the optimal conditions, forcing the Allied troops to wait until "the gathering storm abates". A full moon was also necessary, both for light and spring tide that would facilitate the landings. Among many others, the German command made the mistake to believe that an attack was not possible due to the fairly rough weather at that time. The troops had trained for the landing, not "all summer's long" as the song says, but during many spring weeks, and postponing the landings another month would have also vastly affected the morale of the soldiers who were as ready as they could be for a large-scale assault of the coasts of German-occupied France.

After the initial approach of the landing crafts with their cargo of "wretched souls puking, shaking fear", five landing points saw the formation of beachheads by the Allies. The Canadians arrived at Juno Beach and suffered a very high casualty rate during the first wave. The British landed at Sword and Gold, the latter being also the scene of heavy losses, and the Americans at Utah and Omaha , this last one seeing the highest number of soldiers killed of all landing grounds. A number of Free French and Polish units also entered the battle after the initial phase, as well as contingents from Belgium , Czechoslovakia , Greece , the Netherlands , and Norway . Although the songs doesn't mention them, the airborne units also contributed significantly to the success of Operation Neptune.

As it is mentioned that "the cliffs erupt in flames", the song may describe the action at Gold Beach , but the scenario was roughly the same at every landing point, and "remorseless shrapnel" was raining wherever Allied troops were trying to gain a foothold on land. The lyrics, vocal harmonies, as well as the music itself, are very reminiscent of the terrible and some would say unnecessarily long scene at the beginning of the 1998 film Saving Private Ryan, and evoke vivid images of the slaughter that took place. In the three months that followed the D-Day, almost 72,000 Allied and about 200,000 German lives had been lost. The campaign was a success, albeit a costly one, that constituted one of the major steps towards the fall of a despicable regime.