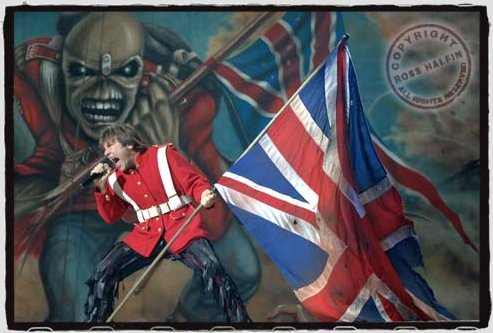 This is once again a war song seen through the eyes of a soldier, like many other Iron Maiden songs before from 'The Trooper' to 'Afraid To Shoot Strangers', to name but those two. However, if war is present, it is only in the minds of those who are about to go, and the scenes of war are more hinted at than actually described. The intro, like the ending, is soft and reminiscent of the calm before the storm war that explodes in the middle section of the song to quieten down again after the ordeal is over. This is yet another of many example of how Iron Maiden's music can evoke the visualisation of a story and summon up images in our minds.

Unlike in other Maiden war songs, the lyrics offer us here a glimpse of how those who are "left behind" feel, with the silent dismay to see a loved one go and risk his life far away from home. Those who enlist in the forces know that they will have to face real action at some point, and those who are close to them are also perfectly aware of that. Still, the emotion remains the same when the time comes.

The last sentence of the first verse, "and so you go to war" sums up in only a few words how horribly simple this all is. A very simple statement indeed, but loaded with incredible feeling.

The second verse describes the horrible reality of an armed conflict, where the combatants are more or less left to their own device. They probably also feel let down by the country they are supposed to serve "There is no one that will save you" yet they keep going on and face death without a second thought. The lines "On the shores of tyranny you crashed, a human wave" constitute an interesting link to 'The Longest Day', the song about the 1944 Normandy landings of the Allies and that features on the same album.

The pre-chorus seems to echo the usual propaganda that goes on in every country to get young people to enlist, depicting a somehow fairly unrealistic and quite romantic view of the reasons to join "for the passion, for the glory" whereas the majority of those who end up in the military in fact consider essentially the assurance of having a secure job and a regular income as main incentives to become soldiers.

The flamboyant chorus, however, evokes this notion of loyalty loyalty to the flag, emblem of the country the soldiers are fighting for, and mostly loyalty towards the "comrades in arms", those who suffer the same ordeal as you when you face a war situation. This is this uncompromising attitude that is exacerbated in the song, and in its powerful title. As Bruce Dickinson rightly said, "certain areas of morality are not negotiable", and this is true regardless of the country the soldiers are supposed fight for.

"These colours don't run" is incidentally what Bruce said to the audience while holding proudly the Union Jack during the infamous "eggfest incident" at the San Bernardino gig of 2005, where the Iron Maiden set was rudely disrupted by eggs being thrown at the musicians and various other unpleasant things happening due to the "Ozzy camp". Maybe this sentence struck the rest of the band and they decided to write a song around it. You never know...