Hallowed Be Thy Name (live) 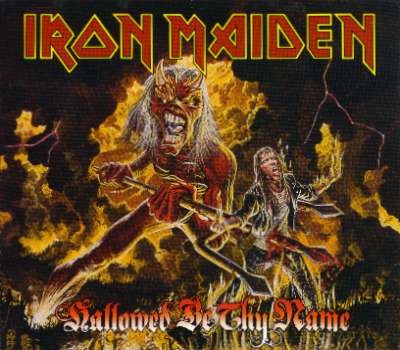 The songs on this single, which went to number 9 in the U.K. charts, are live recordings from the Fear Of The Dark tour. A selection of live recorded songs from this tour were released as A Real Live Dead One, which included 'Hallowed Be Thy Name' and 'The Trooper'. The attraction of this single is the other two songs, 'Wasted Years' and 'Wrathchild', which were also recorded on the same tour but did not appear on A Real Live Dead One. The cover picture is notable because it is one of the very rare times that a member of the band has been officially portrayed (although the entire band was drawn into the back cover of Somewhere In Time). This one is a fairly primitive drawing of Devil-Eddie impaling Bruce with his pitchfork. It seems to be the rule in Maiden to have Eddie kill the departing singer, as it was already done with Paul Di'Anno's very last EP with the band on a very rare Venezuelan pressing of Maiden Japan. This was also Bruce's last single with Maiden before his return in 1999.

The Trooper (live) (Harris)
This live version of 'The Trooper' was recorded at the Ishallen of Helsinki, Finland, on 5th June 1992 (?) during the Fear Of The Dark tour.

Wasted Years (live) (Smith)
This live version of 'Wasted Years' was recorded at the Stadthalle of Bremen, Germany, on 16th April 1993 during the Real Live Tour.

This live version of 'Wrathchild' was recorded at the Ishallen of Helsinki, Finland, on 5th June 1992 (?) during the Fear Of The Dark tour.