The Best Of The Beast Compilation 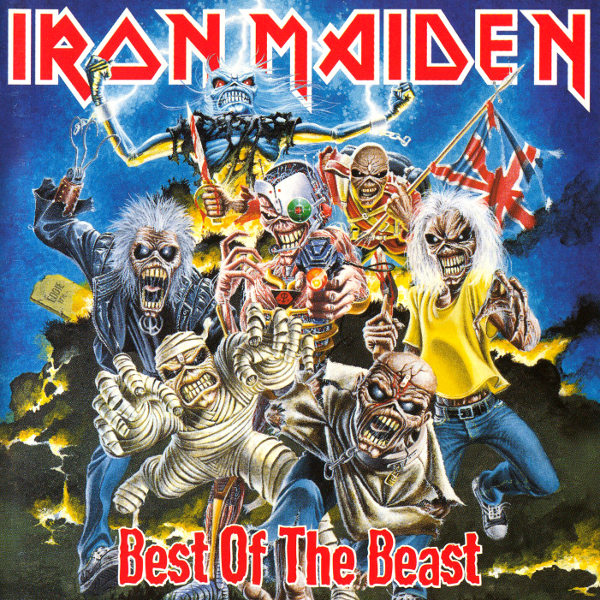 Best Of The Beast is the first major Iron Maiden compilation. It contains a sampling of songs from Maiden's entire career, from the earliest Soundhouse recordings up through The X Factor. Also included is a fairly long booklet containing album and single cover pictures, diary entries, song lyrics, discography, and tour information. In fact, the booklet for the vinyl version contains a listing of the place and date of every concert on every major tour that Maiden has ever done.

There are two major highlights of Best Of The Beast, the new single Virus and two songs from the original SoundhouseTapes, 'Strange World' and 'Iron Maiden', which were previously unavailable on CD. (The LP version contains the other Soundhouse tracks 'Prowler' and 'Invasion'.) These tracks make Best Of The Beast well worth purchasing.

Overall, the track selection is excellent, with most of Maiden's best material included. There are however a few glaring omissions, such as Revelations, Flight Of Icarus and Stranger In A Strange Land. Probably every Maiden fan will find some favourite songs missing, and in order to get every classic song it would be necessary to add a third and possibly fourth disc. In fact, just release all of the Maiden albums in a box set!

In summary, Best Of The Beast is probably the ideal collection for a new Iron Maiden fan, giving a sample of some of Maiden's best material. And for the hard core Maiden fan, 'Virus' and the tracks from SoundhouseTapes make this collection necessary as well.