Ghost Of The Navigator 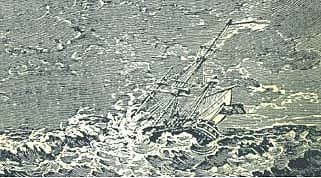 With an acoustic intro building up into a manic crescendo, this is another maritime epic in the same vein as 'The Rime Of The Ancient Mariner'. The instrumental part summons up images of a ship struggling in the middle of a storm. During this particular part, Nicko's fast foot gives the impression of a double-bass drum. This spurred a polemic among the fans, some of them saying that it was the first time that he used double-kick mechanism. In fact, Nicko has never used a double pedal so far. He uses instead a technique called "cradling the pedal", i.e., hitting toe-heel alternately, thus giving this impression of a double-kick. His speed and technique place Nicko among the best rock drummers ever.

The lyrics are a metaphor of life, with the ship sailing West towards the setting sun representing death. The "ghosts of navigators" could be an allusion to all of those who go through life without really realising it, being therefore "lost" and not in control of their navigation. This sentence could also refer to our forebears who have sailed the sames 'seas' as us and whose memory still remains. In any case, "nothing's real until you feel" is probably an advice to experience life to the full, with its ups and downs, or run the risk to have wasted this short time between the cradle and the grave.