Face In The sand 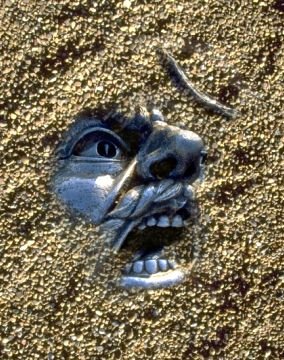 'Face In The Sand' is yet again a statement about the ways of the world and how people react to the horrors that happen on a daily basis. The intro is a long intrumental piece with a few Celtic nods and grows into a great crescendo, with Nicko using a double-kick for the first time on an Iron Maiden recording although he admitted himself that he had suffered a lot playing this song, and would be rather pleased not to have to play it live, which is a shame as it would be a great moment during a concert. The syths are put forward in a brilliant way and create a special atmosphere that is most enjoyable. This is a powerful piece that manages to convey a lot of emotion, and whose instrumental intro could fit in quite well as an ending to 'Paschendale'.

The lyrics, not unlike those of 'Brave New World', seem to deal with the general state of mind of the western world whose populations have become dependent on news that are pre-digested and sometimes warped. "Everyone's waiting for something to happen/Everybody's waiting for something to see" attests of a life of passive boredom, just to be fed with disasters depicted on a tv screen ("looking at death from the sky" is probably an allusion to satellite tv). Even "lunatics" are "waiting for bigger disasters", which they sometime even engineer themselves. Could it be a reference to the attacks on New York and Washington on 11th September 2001 ? It is possible, although the main suspect of these attacks namely Ossama Bin Laden seems to have been more of a calculating and patient mass-murderer than a lunatic. A man driven by hatred, but by no means insane.

Everyone's waiting for news on TV But no-one learns the lesson of the past and a short memory span characterises our civilisation, as "Everyone is looking but no one's listening". People simply take interest out of misplaced curiosity, like those sad cases who slow down on the motorway to better watch an accident in the sick hope that they'll see a bleeding corpse or two. Besides, "Everyone's looking for the reason why", as they do not seem to fully comprehend what they see, as it was the case when the terrorist attacks on the US territory occurred. People around the planet were in shock and could not understand that anybody could plan and execute such horror, and many just stated that this was the work of a "lunatic". The right question to ask, though, would have been "how come some people hate us so much that they go to such horrifying lengths to try and destroy us?" Indeed, why should the nice brave Western world be the target of such attacks? Think about it.

Everyone's nightmares are going to happen The only thing left to do is, according to the song, watch and wait. Praying for an answer and a stop to all these disasters and wars may not do much good, but it shows anyway a step in the right direction in the form of a positive attitude and the hope that the catastrophes will end. They probably will continue until the end time, when there's no-one left to continue the strife and impose misery on the world: "But the end never came and we're digging the graves/And we're loading the guns for the kill". Iron Maiden tell us that the "signs of the end time" are already visible to those who know where to look. Could they be right? Let's just wait and see..