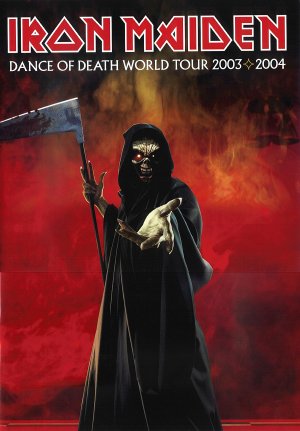 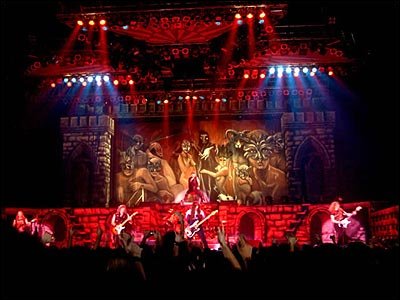 The 2003/04 tour was a strange one in the way that it was split in two parts, the division occurring with the release of the Dance Of Death album. The first part, funnily named "Give Me Ed... 'Til I'm Dead", was reminiscent of the Ed Hunter reunion tour as the setlist was with one exception composed of old songs, some of them not having been played in many years. Bruce commented that "This tour is all about having fun as the name suggests" and the official explanation for it was that it was an appetiser before the release of the album. What springs to mind is that the Dance Of Death album may have been expected for release earlier than it did but, due to unforeseen problems, it only hit the shelves in September whereas the concert venues had already been booked by the band's management. Iron Maiden then had to play the shows with a setlist that would please the fans while avoiding new songs that hadn't been made public by then. But this is, of course, pure speculation. Only 'Wildest Dreams', from the forthcoming album, was played live as a preview of what the album was going to sound like. Bruce Dickinson explained himself that this song could be taped and transferred into mp3 files for Internet diffusion. His own words were:

The album is not out yet, but please pull out your small digital recorders, mp3 players, cell phones or whatever you have. Put it on the Internet, spread it all over the world. But on one condition: When you hear the new album, if you like it, pay the equivalent of three beers to buy the record in the store. That is what keeps us alive. If you don't like the album, just forget it.

He even added "We're not like Metallica" to further stress that those who are openly against mp3s have a losing battle on their hands. Iron Maiden simply have a very sane and sensible attitude towards evolving technology and they have realised the positive potential of it. MP3s should be about sampling the music and then buying the album if you liked what you heard, not about stealing someone's intellectual property. This is merely what Bruce meant.

The shows of the "Give Me Ed..." part of the tour were absolutely fantastic, with the return of a Bruce who efficiently communicated with the audience. He talked and joked like he used to in the 1980s and that was refreshing after the ranting and needless swearing of the Brave New World Tour. It was simply great to have the "old" Bruce back!

The Dance Of Death World Tour was however slightly different. The down side of it was probably that Bruce was not talking much to the audience and that they all appeared to be acting as on autopilot, going through a routine rehearsed a thousand times. On the other hand, the show itself with its theatrical effects was absolutely brilliant. From the mask-wearing of 'Dance Of Death' to the battlefield re-enactment of 'Paschendale', everything was as close to perfect as could be.

A serie of shows namely those of Rotterdam, Wroclaw and Helsinki had to be cancelled and re-scheduled due to Bruce "suffering from flu and severe laryngitis", as the communique ran on the official website. Strangely enough, those dates also corresponded to Nicko's appearance in a New York court to settle an incident that had occurred while the band was on the North American leg of the "Give Me Ed..." part of the tour. Without going into details this site is not a subsidiary of some tabloid newspaper! the incident involved an irate Nicko, a stubborn car park attendant and a black Jaguar. Whose fault it was is not for me to judge, as an every-day incident was simply blown out of proportion by the US judicial system that allows anyone to sue anyone else for just about any reason. It seems to me that the attendant was simply trying to get some easy money out of a "rock star" who supposedly could afford it. In any case, Bruce's illness was a lucky coincidence or was it? and Iron Maiden, who is not a band that lets its fans down, merely re-scheduled the shows as they'd already done when Janick had injured himself during the previous tour.

The Dance Of Death World Tour was not going to encompass the traditionally massive North American leg and only two venues were played in the US, plus another two in the Quebec province of Canada. This may have made some North American fans quite unhappy, but it needs to be stated that the band are not in their twenties anymore and that a gruelling tour a la World Slavery Tour is not likely to re-occur. Let's just be pleased that Iron Maiden still go on the road and carry on promoting the finest music in existence.

Opening bands for this tour were: Stray, Murderdolls, Arch Enemy, Funeral For A Friend, Dio and Motorhead