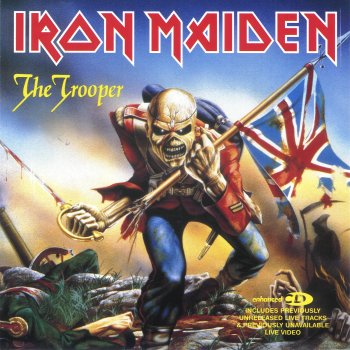 This is the second single in a row to be released over twenty years after the original one and Iron Maiden really start looking like they want to cash in on their past. The videos вЂ“ the original promo video and the live footage of the song filmed in Dortmund in 2003 вЂ“ are some sort of bonus, although it must be said that the live one is quite painful to watch, with images rushing by every split second. This release, in all its different formats, was certainly not necessary and leaves a bitter taste in the mouth of the older fans who already had the original 7" single.

The Trooper (live) (Harris)
This live version of 'The Trooper' was recorded during the concert in Dortmund on 24th November 2003.

The Trooper (Harris)
This is the same version as on the Piece Of Mind album released in 1983.

Prowler (live) (Harris)
This live version of 'Prowler' was recorded in Reykjavik, Iceland, on 7th June 2005.

The Trooper (live video) (Harris)
This is the live video of the audio track that can be found on the same single. Headache guaranteed, and don't watch it if you're epileptic!

This is the original promo video of 'The Trooper'. Quite good.