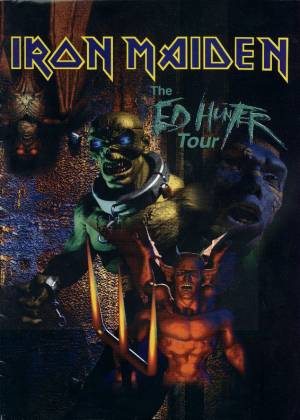 Not long after the amazing announcement that BruceDickinson and Adrian Smith would rejoin Iron Maiden the new 6-memberline up went on the road again in an uncharacteristically short tour insupport of their compilation album and computer game Ed Hunter. It wasalso a chance to re-introduce the almost "classic" line up of the bandto their legions of fans. Sadly, Adrian Smith had to miss some of theshows due to the death of his father, and the band omitted 'Stranger InA Strange Land' from the set because Janick didn't have time to learnAdrian's solo. After Adrian did return, they decided to continue onwithout playing 'Stranger...' because they felt it made the entire setmove better. Moreover, some shows had to be cancelled on the US Westcoast due to an onstage accident in Los Angeles where Dave Murray brokea finger. The band sounded in top form and their three-guitar onslaughtprovided some interesting twists to some of the songs. The return ofBruce and Adrian seemed to galvanise the world, and the Ed Hunter Tourgenerated much more media attention and fan excitement than any of thethe previous tours had. Bruce promised that the following album andtour would pave the way for the return to glory for heavy metal music,a feeling that seemed to be in the air during 1999.

Opening bands for this tour were: Monster Magnet, Soulfly and Puya for North America, and Megadeth for Europe

Intro: Heartbeat/Transylvania/Churchill's Speech
Aces High
Wrathchild
The Trooper
2 Minutes To Midnight
The Clansman
Wasted Years
Killers
Futureal
Man On The Edge
Powerslave
Phantom Of The Opera
The Evil That Men Do
Fear Of The Dark
Iron Maiden
The Number Of The Beast
Hallowed Be Thy Name
Run To The Hills