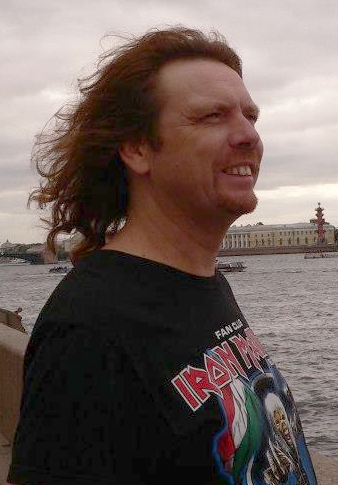 My name is Marcel Fens, I was born and raised in the Netherlands a.k.a. Holland and I am a rocker all my life because I have an eleven year older brother who made his little brother listen to heavy rock in the 70's. Nice detail: his name is Eddy...!

You saw the band back in 1980, when they were still with Paul Di'Anno! What was it like?

There was a Kiss concert and I was a huge Kiss fan (with no money). Eddy bought two tickets and I was nervous for three months. The support act was "Iron Maiden" (not mentioned on the tickets...) and I thought it was a singer called Iron (like Ian) Maiden. I was thirteen and my English was not good at the time. I was totally flabbergasted when they played. Amazing. I never heard music like that before. Superb! The very next day (Monday, October 6) I borrowed money from my father and I bought everything I could find: 1. The debut album. 2. Sanctuary maxi single, with at the back cover an ad about the show the night before. I still have these albums.

The two Di'Anno albums. Piece of mind is my favorite one with Bruce.

See the ladies flashing. All their legs and lashes. I've just got to find my way. -- Prowler

What about a favorite Maiden cover art?

Killers album, definitely. I was amazed when I saw that one when it came out. I bought it at the release date by the way.

This is a tough question. But seeing the start of the Number of the Beast tour, while they played as a support band for Scorpions, I am very proud of that. So let's choose this as best thing! 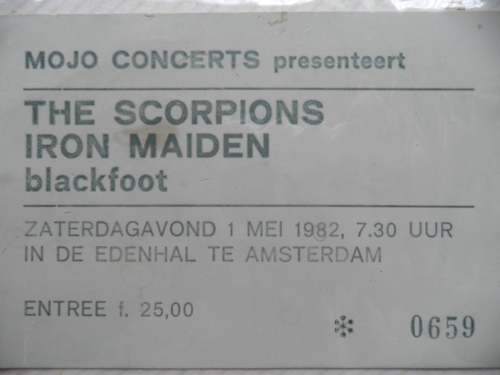 When they kicked out Paul. Of course you can not imagine them without Bruce now, but in 1981 – when I was a 14 year old huge Maiden fan – this was destructive for me and also for my friends.

I know that you were quite disappointed when Bruce Dickinson joined the band.. Why? Tell us the story.

My 'hero' was kicked out of the band. To make matters worse, I saw a picture in a metal magazine (don't remember exactly which one, probably Aardschok magazine) with the new singer Bruce Bruce from Samson. He wore a karate costume and had a similar pose. And he had a full beard (no beards like that in metal in those days)... Man, what a loser... We want Paul, we want Paul...!

Sorry guys, but I will stick with the first one in 1980. Also has to do with the huge impact it had on me, as you can understand. 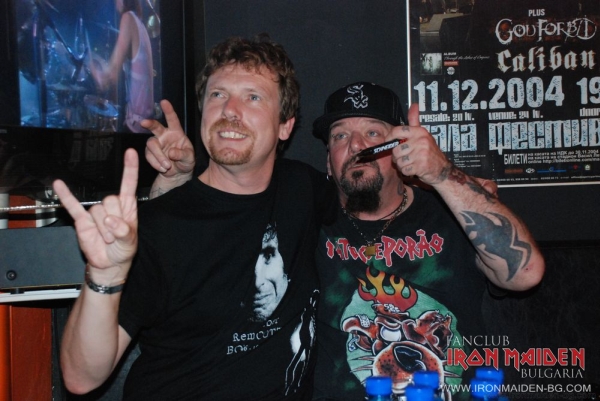 I was in the eighties. But I sold a lot of it later

You say that you werw a collector and you sold a lot but you are one of the few people that own "The sound House tapes". How did you got it?

I bought it in London in 1982. In those days everything was for sale in London, the Mecca of the metal heads.

Back in the 80's you played in a thrash band called SHOCKWAVE and you also met METALLICA. Tell us the story

Actually, I started my first band in 1984. It called Maniac and we played speed metal. I played bass guitar in exactly ten bands. The last one was Shockwave. We made an album for ArtCon productions label (owned by former soul star Arthur Conley) followed by a big tour through Holland to promote it. But after that, we stopped; it was enough! 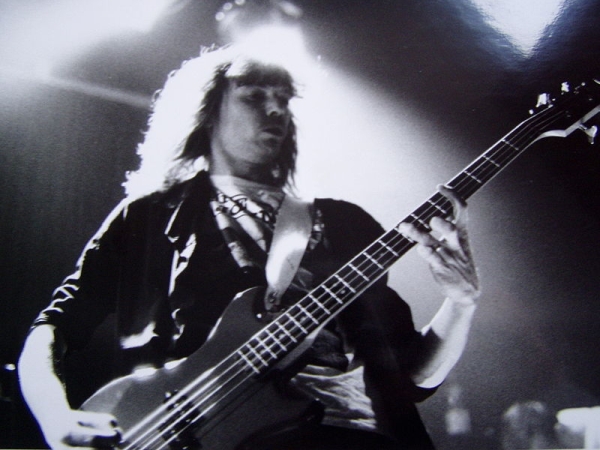 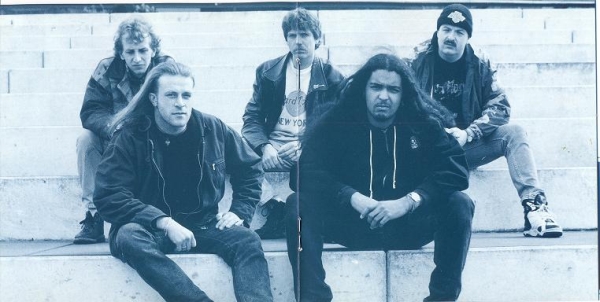 Metallica is a different story. I wanted to form a Metallica fan club for Holland and talked myself (and two friends of mine) backstage through the promoter in February 1984. I talks a lot with Lars and Cliff about it, but they could not really help me. Later that year I met them again in a hotel in Amsterdam and a year later I met them for the third time in London. 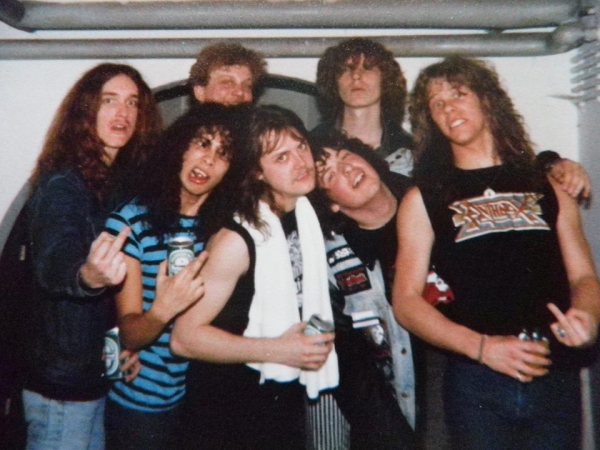 No absurd thing come to my mind.

The Trooper started to piss me off, this f**kin' riff made my head ache and I lost interest for a while. Somewhere in time was their come back for me! The Trooper is also okay for me now (but not more than twice per year...).

Since April 2012. Before that I always felt like a 'special guest'. Thank you guys!! 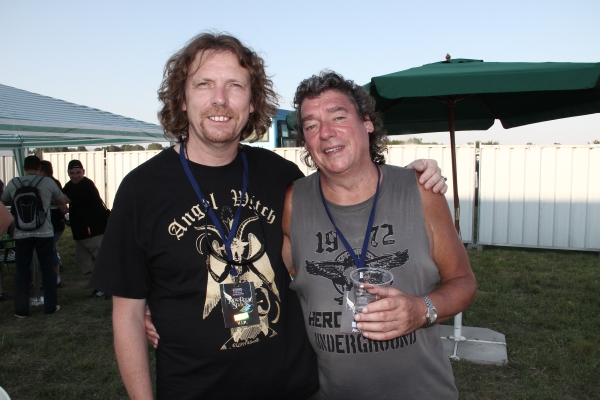 There is not one particular moment to be honest. Every time when we gather it is a huge party and we really are like blood brothers. Three days in a bus without a fight, try that with a group of football fans ;)

The three days trip that I mentioned before. It was amazing and a great experience. First (and only) time I saw two live shows from one tour! And having bowel movements with two of my friends in a krutchma in Budapest, one after each other in the restroom of the poor people... Unforgettable!

The coolest fan club in the world with the ultimate bloodbrothers (and sisters for that sake)! 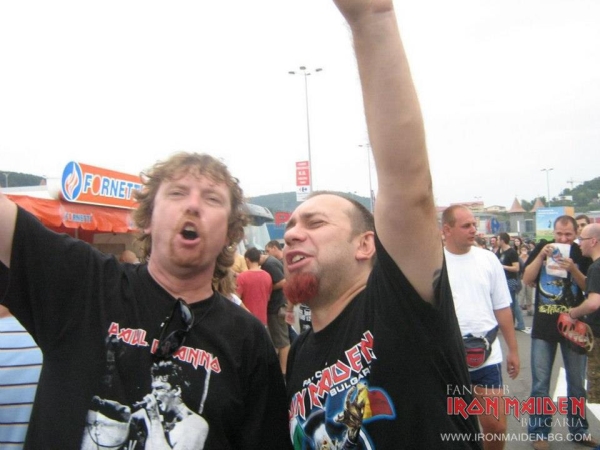 I told you, the Trooper... Hahaha, just kidding. That was a long time ago. Nothing can stop me now!

When it comes to NWOBHM, Iron Maiden and Judas Priest are my favorite bands, BUT... Priest did not start like one, so Maiden is the ultimate winner!

Steve Harris. But only small talk and jokes, the guy deserves a break, nail? Maybe I will also talk about his record collection, because as far as I know, he has one of the greatest Iron Maiden bootlegs collections in the world! 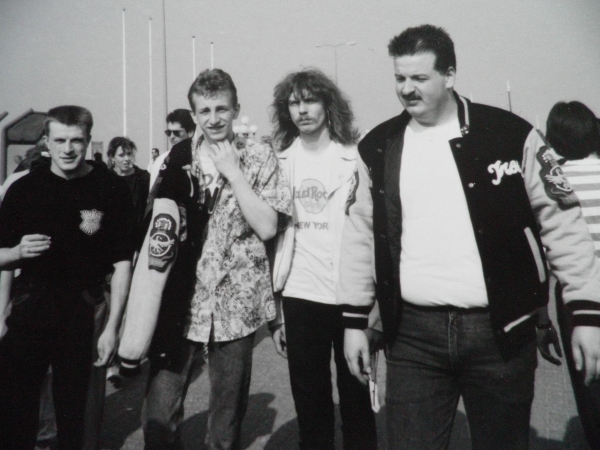 I know that you are huge VAN HALEN fan. How did this love started?

Can I have some extra pages ;)
Eddy bought their debut album in 1978. I heard it and was totally swept away. I had to listen to it over and over again. Especially the guitar solo ''Eruption''. I could not get it into my head that it was only a guitar playing. That was something totally new, never heard before. I bought the record myself a couple of weeks later and still have it!
Until today I consider Eddy Van Halen to be the best guitar player in the world, unsurpassed!

You are also a photographer... what is your favorite thing to photograph?

My lovely and beautiful girlfriend, Vesela. Not really a thing though. But to be honest, I did not make as many pictures of her as I wanted, but there is enough time left!

You also are passionate about history. Maiden also have some history related songs. Are they historically accurate?

My favorite historian figure is... Alexander the Great. I read many, many books about him and therefor know a lot about him. According to me, Maiden did a great job singing about him, although I would never call the ancient kingdom of Macedonia a part of ancient Greece...

I wrote two published books about the Roman Empire. Both in the Dutch language.

Next to Eddy I have two other older brothers; Robby (65) and Jos 67). My mother is 92, but she still kicks ass!! She is the oldest client ever in The Black Lodge!