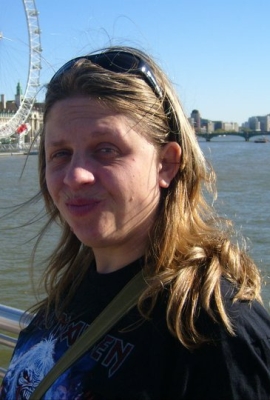 My name is Tsetska and to be honest I still don't know what I want although other people on my age have clear idea what they want to do in their life. All I know is that my passion is the music in quite strict limits.

Back in 1986, I heard "2 minutes to Midnight" from "Powerslave" and it just grabbed me so hard. Later I haven't listened to Maiden because I liked softer bands. Then I met my husband who is a huge fan of the band and the other is history. Since then I'm crazy about the band. By the way the solo of "2 minutes to midnight" is my favourite in the world.

Which are your favourite Iron Maiden albums?

All of them. In every album I find something that is mine.

Do you have a favourite caption or sentence from a song?

"Only the good die young All the evil seem to live forever" – "Only the good Die Young", "Don't waste your time always searching for those wasted years" – "Wasted Years" and "Heaven can wait 'til another day| – "Heaven Can Wait"

What about a favourite cover art?

„KILLERS"! For me this is the most IRON MAIDEN related cover.

Their show last year in London. It was great to see them on their own soil.

I'm not sure that there is such a moment. I'm one of those blind and overly attached fans that don't have a clear view on the situation.

Four so far. When Maiden were here with Blaze Bayley in 1995 I missed the show because a week later I gave birth to my son.

London on 5th August 2011 because I was there, otherwise Live After Death and Rock In Rio. 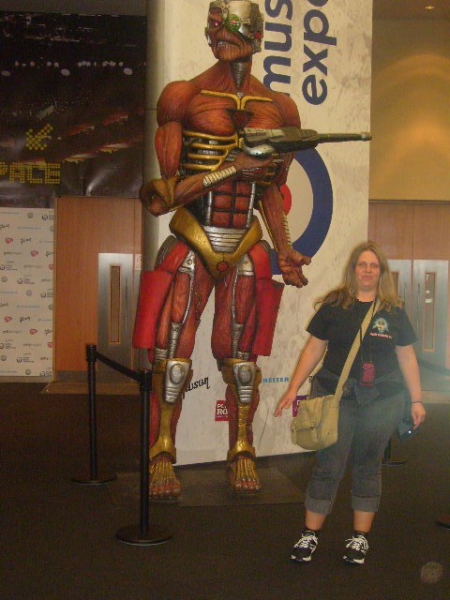 Not really. But I know few people that I would like to rob their house (Ha – Ha - Ha)

The memories from the concerts and some material stuff – magazines with Maiden articles in them, Christmas cards, the official fan club fanzine, CDs, DVDs, some medallions. All of them are so precious to me.

That their time has gone and they are musically stuck.

No. In my eyes they are flawless.

Nothing about the band. Around the band for example the chief of the official fan club. 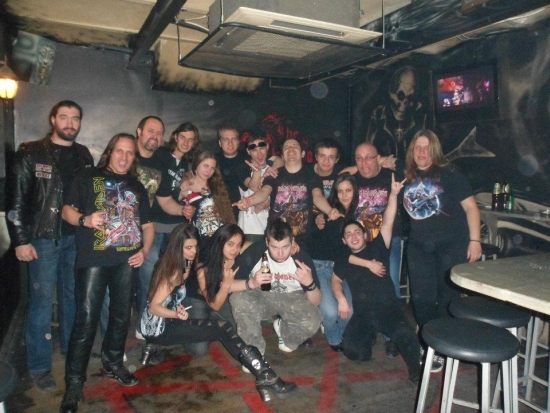 ALL OF YOU! In February 2009 we went to Belgrade and back then I knew only two-three fan club members, but that was enough for me to decide to join he fan club because there is nothing better than meeting with people which share your interests. They accept you, understand you when you talk about your favourite band. For me it's important to have an opportunity to chill out with friends with whom you don't have to argue about the music at the party and stuff like that.

I have a lot of pleasant memories. As I think I have always spent a great time with the club but the most exciting time is when we hit the road. The most memorable trip was that to Belgrade. This was certainly one of the most exciting moments related to the fan club.

Well, there aren't uninteresting stories, but the latest funniest story was the organizational meeting for our trip to Pravets. There isn't another hullabaloo like that.

I'm proud of being part of this fan club, I'm proud of all the young people who make all this for real. Honestly, I don't know what I was doing before that. It was a big bore. 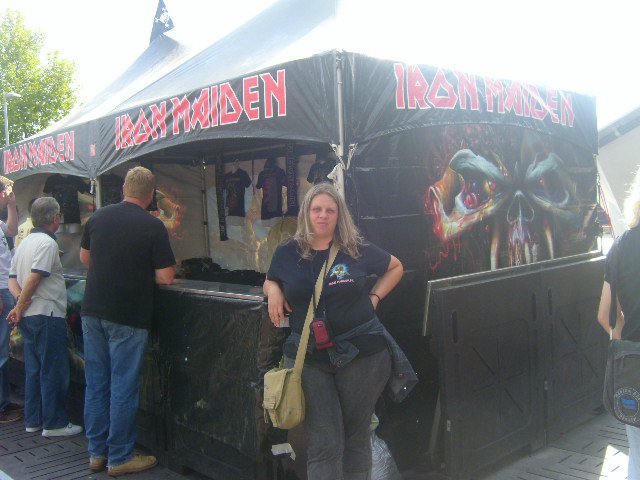 There isn't such a force even in the Star Wars galaxy. No withdrawal! When I'm gone I want to send me with "Only The Good Die Young"?

Because they flow in my veins. Because everyone who have accepted this religion knows why.

How did you decided to tattoo yourself and why exactly with Maiden tattoos?

Because every tattoo means something for me about a certain period and Maiden has influenced me a lot. Their work, every single song has found a place in my heart and the tattoos on my body are extremely special. Every one of them has a personal story.

What is to raise two children in a "chalga" country? Can you teach them to listen the right kind of music?

I can talk a lot about this. The truth is that I wage war with the company of my son and I won't give up. He jumps from industrial to some kind of techno music but I'm happy that Maiden has a special status in his mind and he's listening to them very often. I don't have musical problems with my daughter yet. She likes Bruce and asks me when she'll meet him. I ask myself the same question.

Both you and your husband are part of the fan club. Is the love to the band the reason for your love to each other? And how have you met?

From my experience I can tell that the foundation of a long and promising relationship is made of common interests (in our case heavy metal). Our love to rock music gathered us and almost immediately Iron Maiden became a constant part of our relationship. If he didn't have the same interests like me we wouldn't be together for so many years (at this moment 22). We met at the bar "Kragloto". That was one of the few places where rock fans gathered together. 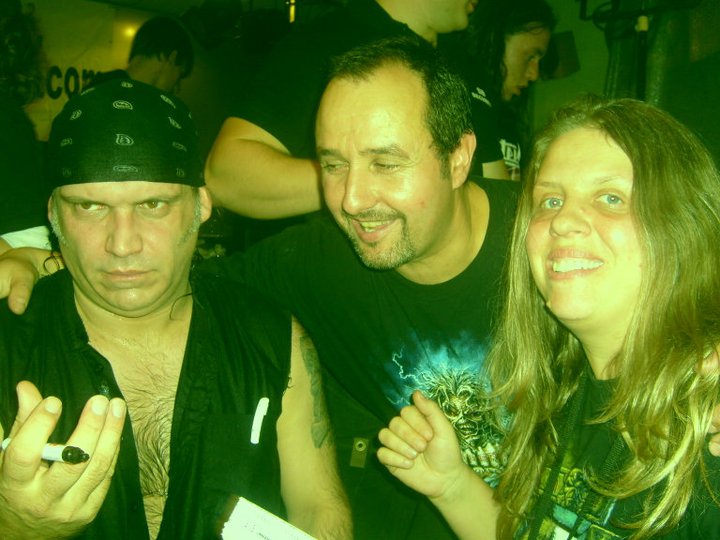 According to you what in the fan base have changed through the years and when was more real – before the changes in 1989 or now?

I don't know, nowadays the fans have everything. They can watch their favourite bands alive, listen to fabulous recordings, download music with three clicks. They don't have to record cassette on some cassette recorder and sneaking quietly from the room not making noises for the recording on the tape. But now there is not such a thrill - hiding from the police, giving half of your mother's month salary for two badges, to be different and mystic for the mass. I remember that we were like a closed community - not everybody was accepted in it. You had to know more than the ballads of Scorpions to enter in the metal community. In Bulgaria back then was more real than now.

Do you listen to some new bands or your attention is grabbed only by the old school ones?

There are a few that I like. They aren't so new but they have appeared 20 years after Maiden. For example Avenged Sevenfold. These days I gravitate to some black metal stuff and rediscover bands I haven't paid attention to. But mainly I'm stuck in NWOBNM. This is my type of music.

As a member of the two fan clubs (the official and the Bulgarian) from which are you more pleased? And what do you miss in both of them?

Definitely I'm more pleased with ours. We are a united pack and every new member is very welcome. In the official fan club everything is more or less interactive and virtual because the members are from all over the world. I haven't missed anything in both fan clubs. Everything is perfect. I receive pre-order sales from the official and all the emotions, the conversations and parties with friends from the Bulgarian.

Steve, of course. I have a lot of things to talk about with him – about his nightmares, his inspirations, about the discipline which helped him to reach this high professional level. Yeah there are a lot of things but I'm fully convinced that if I have the chance to meet him I'll pass out. I won't know what to say. 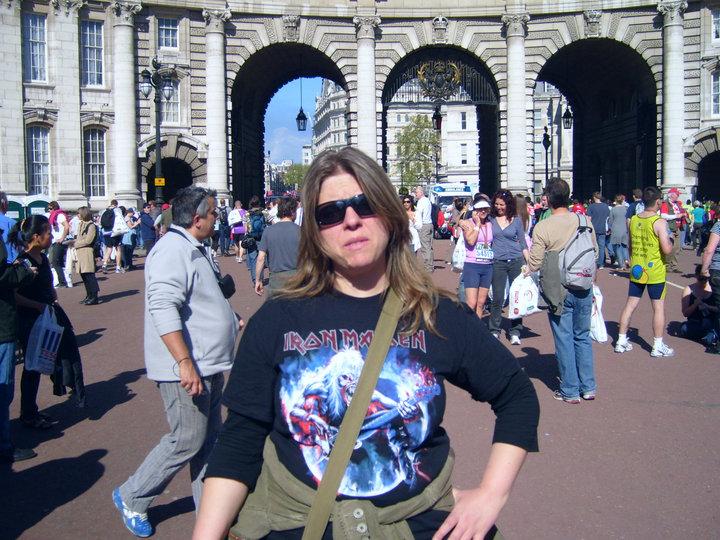 I simply have to ask you – why Steve Harris is your favourite band member?

You didn't forget anything. I told you everything. There is nothing special about me, just one ordinary and passionate fan.