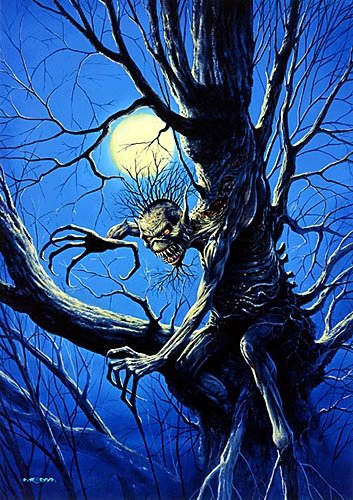 'Fear Of The Dark' is an instant Maiden classic, and certainly a live concert favourite. It begins and ends softly and ominously, with a tune that is vaguely similar to 'No Prayer For The Dying'. The main parts of the song are fast and exciting and quite frantic highlighting the notion of fear that becomes panic, with perhaps the most recognisable Maiden tune and chorus since 'The Trooper'. The live versions of the song feature an interesting crowd interaction during the instrumental section and it has become part of the setlist ever since the release of the album. Everything about this song is incredible, and it is probably the best song of the album.

According to Bruce Dickinson, Steve who wrote the lyrics is himself actually afraid of the dark. Whether this is true or not is not important, as he seems to have transposed in a very clever way the childhood fear of being left alone at night in the dark a very common fear in children that most of us have probably experienced at a younger age and turned this irrational phobia into an adult metaphor. It is basically about the fear of losing control and drifting into the madness that threatens virtually everyone at one point or another in life.

As Mick Wall recalls in his commentary contained in the 1998 re-edition of the album: "It's about being scared but not really knowing what of," Steve explained at the time. "They say that everybody has a secret fear of something, they just don't always know what it is until it's too late," he added enigmatically.