The compillation FROM FEAR TO ETERNITY 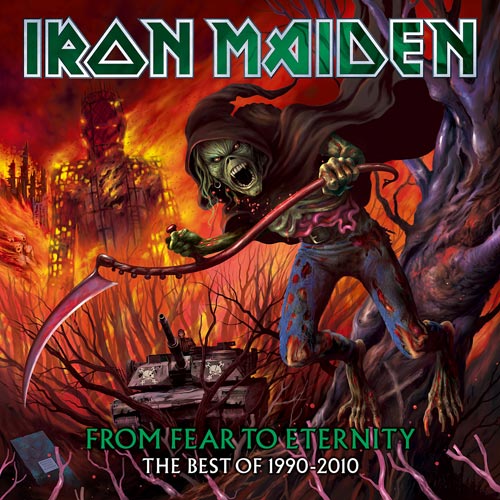 From Fear to Eternity: The Best of 1990 - 2010 is a "Best of" album by British heavy metal band Iron Maiden, containing a selection of songs originally released on their last eight studio efforts to date. The title is lifted from the 1992 single, "From Here to Eternity", although it does not feature on this release.

The album was announced on 15 March 2011, to be released by EMI on 23 May 2011, although this was later changed to 6 June 2011. Unlike their previous compilation (Somewhere Back in Time), the release will cover two CDs in order to encompass longer tracks, such as "Paschendale", although the price will remain that of a single disc record.
As with Somewhere Back in Time, each track is sung by Bruce Dickinson rather than Blaze Bayley (who sang on The X Factor and Virtual XI), the band again opting to use later live versions of songs which originally featured other lead vocalists.

Classic Rock described the album as representing "Gold from ever era", claiming that, although "weighted towards the... last five studio albums", the "earlier singles... fight their corner remarkably well." The review also argues that some of the release's later songs "match anything from Maiden's 80s heyday."

In their July 2011 issue, Metal Hammer praised the compilation for doing "an excellent job of gathering the heartiest wheat over the last two decades", although deeming Blaze Bayley's absence from the album a "glitch" albeit "for the best

7. The Reincarnation of Benjamin Breeg 7:22
(from A Matter of Life and Death )