FROM THERE TO ETERNITY 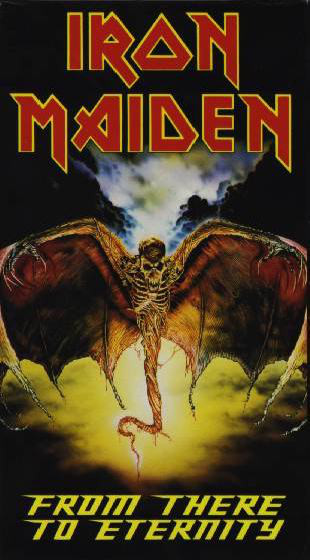 Released: 1992
Tracklist:
1. Women In Uniform
2. Wrathchild
3. Run To The Hills
4. The Number Of The Beast
5. Flight Of Icarus
6. The Trooper
7. Two Minutes To Midnight
8. Aces High
9. Running Free
10. Wasted Years
11. Stranger In A Strange Land
12. Can I Play With Madness
13. The Evil That Men Do
14. The Clairvoyant
15. Infinite Dreams
16. Holy Smoke
17. Tail Gunner
18. Bring Your Daughter To The Slaughter
19. Be Quick Or Be Dead
20. Wasting Love
21. From Here To Eternity
Once again a video compilation, but this one was only released for the US territory because The First Ten Years video compilation was not released there back in 1990. It contains exactly the same clips as the The First Ten Years, plus a few videos up to 1992, adding up to about 95 minutes of Maiden visual as well as musical enjoyment. Most of them are also available on the Visions Of The Beast compilation released in 2003. A note by Steve Harris himself can be found on the back cover:

Having just spent the past 2 days making the video for "From Here To Eternity", the last 14 hours of which have been spent filming nothing but performance footage, I am reminded of everything I love and hate about making videos and the great memories which come back to mind. This video that you hold in your hands contains every one of those memories, from the beginning with our first video "Women In Uniform" right down to the last few moments spent finishing "From Here To Eternity". We hope you enjoy them.
Steve Harris