Hello, Blaze. Thank you for doing this interview. Six Months ago you released "The King Of Metal" album how is it accepted so far?

It has been fantastic everywhere. It is a very different album and has surprised a lot of my fans but everybody seems to have a favorite song on the album and likes it so i am very pleased with how it has been received

The album is like a tribute to other musicians who are not among us anymore. Most of the bands dedicate one or two songs to a "fallen hero" but you turned your whole album into a tribute. How did you get with this idea and why you did it?

The album is dedicated to the fans of heavy metal, who support me and other artists like me. There are two songs that are tributes: Dimebag and Rainbow fades to Black. These are tributes to Dimebag and Ronnie James Dio

You produced and released "The King Of Metal" on your own. How hard is that?

It is difficult taking care of everything. I had a lot of help from the people that i worked with. 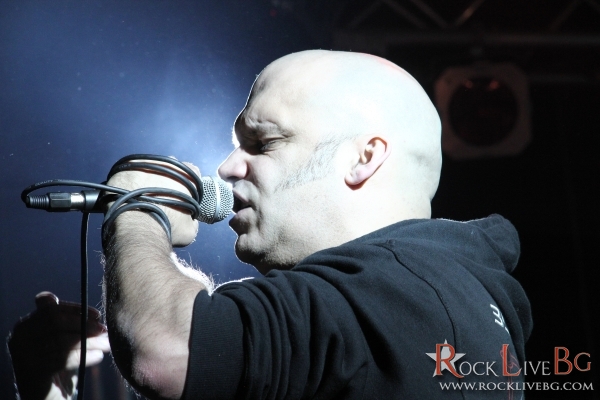 If I'm not mistaken you mentioned that Steve Harris helped you with something on the new album?

Yes. I mixed most of the album at Barnyard studio in Essex, Steve Harris's studio. It was great working together with Tony Newton, the engineer that works fulltime there and he did a great job.

A lot of musicians and bands are saying that nowadays it's hard to make a living by making music. Is that true?

Yes it is true. Unless you sell a lot of CD's, then it is difficult to make a living. I try and go to every town or city that has a venue and play. Now i am doing a classical Acoustic Tour and i will return to Bulgaria with that on the 6th of April, in Sofia.

You keep an incredible close connection with your fans and you even record guest vocals for some young bands. How important is that for you and can you name some young bands that have really impressed you.

I remember Black Horizon, Sinnergod, Dragonsclaw, Trooper, Chris Declercq as very strong songs, but really, all the ones I have done have been a great experience. I like to support good young bands if they have a good attitude.

In the beginning of this year WOLFSBANE released a new album – "Wolfsbane Save the World". How did you fell to work with those guys again and how did the fans accept the album?

The album has done very well; I think all of the WOLFSBANE fans who have bought WOLFSBANE saves the world have been very pleased with it. I really enjoyed writing the songs, it was nice to work with everybody in the band again and i am very excited about the small UK tour.

Yes, you will do few live dates with WOLFSBANE at the end of October. What do you expect?

It is always crazy when I get together with WOLFSBANE. The new songs from the album feel really good and there is a lot of emotion. I am looking forward to playing some of them for the first time on this tour.

During this WOFLSBANE tour the CD "The Lost Tapes: A Secret History" will be available only through the merchandise stand of the band. Can you say with few words why this record is so unique?

I was clearing out my shed and i found a box of WOLFSBANE stuff. I don't know why I had it and I had forgotten all about it. I gave the box to Jase Edwards. It had some tapes in it. He listened to them and managed to put this together from that.

WOLFSBANE supported IRON MAIDEN back in the 90's do you think that this is possible again?

I'd like to think it would be possible if IRON MAIDEN ever did another tour like that. It would be a lot of fun

Let me take you back to the Maiden years. What are your best and worst memories during your time in the Maiden lineup?

Some of the best memories are playing in Bulgaria and Greece and the fantastic reception I had from the fans and the incredible support. The worst memories are food related.

What is the best and worst thing about being a member of IRON MAIDEN?

The best thing is you are part of the greatest heavy metal band ever in the world, performing some of the greatest songs ever written. Being a part of Rock History. The worst thing is the travelling, hours and hours of travelling, from one place to another. But all the gigs and the support from the fans is absolutely incredible.

Did you miss something from your time spent with IRON MAIDEN?

We all know how the story of IRON MAIDEN continued after you left. But nobody ever learned how it happened. How did you learn that you won't be the singer of Maiden anymore?

We had a big meeting in London with the manager and told me that they didn't want me to be in Iron Maiden anymore and that Bruce Dickinson was coming back.

Do you keep in touch with someone from Maiden?

I am still in touch with Steve Harris and I try and go and see them whenever they are in the UK if I am not on tour.

Ok, this is a question from a fan - What is the story behind the song "Soundtrack Of My life"?

Looking back at my life, I have been obsessed with rock and metal music and obsessed with trying to be a great heavy metal singer. I sacrificed and gave up a lot because of the single minded attitude that I had. So, in some ways the song is a reflection of that. I have done an acoustic version with Thomas Zwijsen playing classical guitar and there is a clip of that available on YouTube, which i think is the best version that i have recorded of that song.

Yes, it was crazy this year! The venue was very nice, the fans treated me like a king and the food was very good. I enjoyed the local Bulgarian beer.

Your life changed upside down in the last three years but you are still going on and refusing to give up. What is the formula for this? How are you doing it?

I have a lot of support from my fans all over the world and my family and close friends. It is a challenge to keep going but with the incredible support and encouragement I receive, I feel it is worthwhile. I hope that all of my fans appreciate me going on and not giving up.

So, what about the plans for the future? New album?

I am going to release a Classical Acoustic EP with Thomas Zwijsen (www.ThomasZwijsen.com) in February 2013. It will have 5 songs on it and I am working on this around my touring commitments. We will come back to Bulgaria with our Classical unplugged show, which i am very excited about. I am also doing some guest appearances and some concerts with Paul Dianno.

What happened with the video recording from Belgium in 2011? Is it going to be released as DVD?

I have been so busy with my other projects that I haven't had time to look through the footage. When i get the time to do this, I will make the decision on when it will be released.

You split up with the musicians of your band in the beginning of 2011. What was the reason for that?

It was purely financial. I just don't sell enough CD's to have my own fulltime band.

You will do a short tour with Paul Di'Anno. He is quite a wild person. How do you get along with him?

Paul is great fun. He has a great sense of humor and i really enjoy the shows that we do together.

When we interviewed Paul few years ago he said that when you two met on stage in Turkey in 2004 you had a bruise on the face because you got in a fight the previous night. So what was the story?

Yes. Somebody insulted my German fans and called them Nazies so I attacked them and we got into a big fight.

Can you leave a message for your fans in Bulgaria, who will read this interview?

Thank you so much for all the support and encouragement that you have given me. I am really looking forward to returning to Bulgaria with my new EP and I am very excited about seeing you all. Please check my facebook page and website for details of the tour. Can't wait to see you all again!