Interview with Gabrielle Bernasconi - singer of The Clairvoyants (09.07.2011) 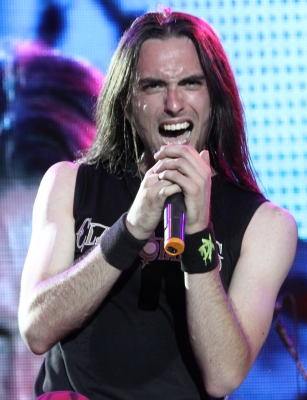 For the second time in Bulgaria

How do you feel?

I had such a good memories from the first time when we played in Sofia, so coming here is like coming back to a good dream. Here is a big festival .. with a lots of bands and people, perfect organization and its like dream come true.

Hah cool but we forgot the most important part... Please present yourself

Ha-ha. Ok my name is Gabrielle Bernasconi - singer of The Clairvoyants. We are Italian Iron Maiden Tribute band and we are also beginning to publish our own material and music. We are currently recording our second album, so we are on the verge of 2 things.

You mean that Iron Maiden are the beginning of what the band actually is ?

Yes we started as an Iron Maiden tribute band in 2001 but in 2008 we started composing our own music because we became quite popular in Italy and abroad, so we said "okay maybe we can do something else and something on our own." We kept the tribute band as a live act and we recorded our album "Word to the Wise" in 2009. We also did some touring for the album supporting bands like Gotthard and Doro. Now we started to record our second one.

How can you describe your music. Is it anything like Maiden or...?

For me it doesn't have much to do with Iron Maiden. Its Classic Heavy Metal but not the British one and its bit more modern. It's just a mix of all the influences we have of all the bands we like. Obviously you will see that we like Iron Maiden, Bruce Dickinson and Nevermore.

So you said that you are recording a second album .. Is it going to be much different than the first?

No it's the same kind of Heavy Metal but in my opinion the songs are much more mature. With the first album we had to compose everything bit in a rush, so some songs were not just quite what we wanted. In the new album we had the time that we needed and the songs came out much better.

Ok, how it's going to be called?

Well we are still thinking on that... we haven't decided.. I have an Idea but I can't say it right now.

Ok as you said before, you have some great memories from your first visit. Was it what you expected or it was more than that?

Well I haven't been to Bulgaria before and I didn't know what to expect. Because there are parts in Italy where heavy metal is not that popular and I didn't know if in Bulgaria is the same. But when I saw the venue and the crowd I realized that this was more than I expected and it was great.

I've noticed that in Italy for example there are a lot of Iron Maiden tribute bands , as for Bulgaria there is not even one.

Yes.. there are a lot of bands playing covers but not as a straight tribute band. Italy has a lot of tribute bands at least I am aware of 2 Iron Maiden tribute bands – Clairvoyants and Children of the Damned ...

Yes these two are maybe the most popular .. but I think there are more than 10 Maiden tribute bands. 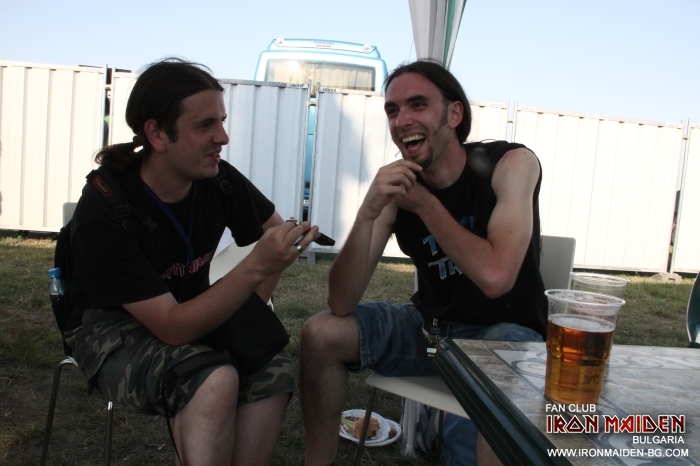 So why it is such huge difference ...? In Bulgaria there are lots of true Fans and musicians

I don't know... I think it has something to do with the underground scene. I mean when we started there were not so many tribute bands. It was the same, there were a lot of bands playing covers, but the tribute bands were not that popular. But now for the last 5 years its getting more and more popular. And now it's hard to find a cover band and you will often see straight tribute band to almost every band.

So is it hard to form a tribute band?

It depends on what approach you take. We never tried to copy and imitate Iron Maiden in the way they are dressing or how they are on stage.

Yes there are also such bands.

Yes, Yes .. I don't like that....Well you know if you do it well it is good for the crowd. But I would not feel good doing that. Bruce Dickinson is Bruce Dickinson and he exists.. I just sing his songs my way with my voice and with my way of being on stage and the people like it .. so its ok... This is my tribute to Bruce Dickinson and the band.

So you choose this way of tribute

Yes, there are many other bands that dress the same way and even say the same sentences between the songs.. and the crowd also likes it.. So.. you just need to find the right people. This is the most important thing to form a band. Before even the quality of playing is the character. The people that you play with need to believe in what they are doing, otherwise in 1 or 2 years everything will go away and the band will split up.

Yes, definitely the "Golden era" between The Number of the Beast and Seventh Son album. In my opinion the songwriting the playing and everything during that period was on a top level 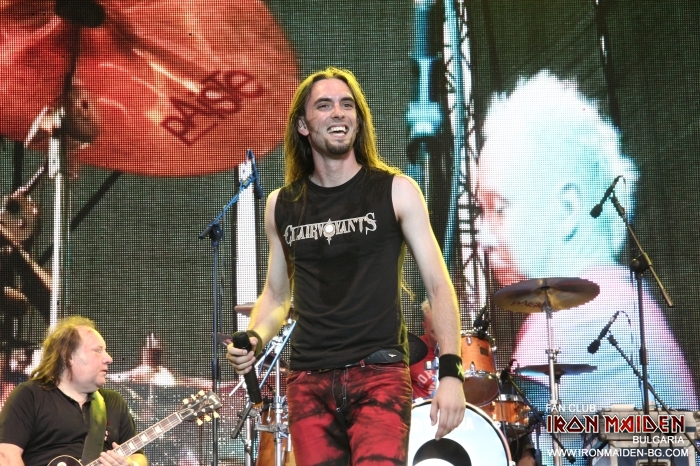 What about the Blaze Bayley era? ..I know that this is a long topic but some people like it , some hate it.. and others think it is special.?

Yes I know.. well we played with Blaze few times and.. in my opinion in Iron Maiden he was not happy with what they want him to be. I think he was forced to sing songs that were not made for him. I am a fan of all his albums before Maiden.. With WOLFSBANE and after with BLAZE BAYLEY band. You know the BLAZE BAYLEY band is just Killer they are great. His voice is perfect for that kind of music. I don't know why Maiden forced him to sing songs like "The Trooper" and "Wasted Years", those songs are really difficult for his kind of voice. But don't get me wrong he is good singer, he is great singer actually but his voice is different!

What do you think for the period since Bruce Dickinson came back and in general the last albums?

Oh this is even a longer topic because I like Brave New World very much. I remember when I heard it I was sure that they were back. And the other albums.. I like them , I listen to them, maybe even more often than the old ones... because I Know them with my heart to every single detail. But in my opinion now they are going down.. But they can afford it you know. They do what they want, they can go on stage and play the whole album, they like it and they know that they can do it without any problem. You know I think they already reached their highest level many years ago.

But they are great right?

Yes, yes they still are great I listen to all the albums with pleasure but I think they lost something from the golden years.

Ok, we understood that you like the golden era, but generally as a band which era you prefer to play?.. And which song you think fits you best?

Well for 10 years we played almost everything. But the song that I love and prefer to sing is Hallowed Be thy Name. As a song, as a feeling, as my performance, as reaction of the crowd I think the song is perfect. It's probably the best song that Iron Maiden wrote. I also like the raw energy from the first 2 albums. I don't like Paul Di'Anno that much as a singer but the songs are like punch in the face.

So tonight you will sing some of those song?

Yes from the first and some of the second album 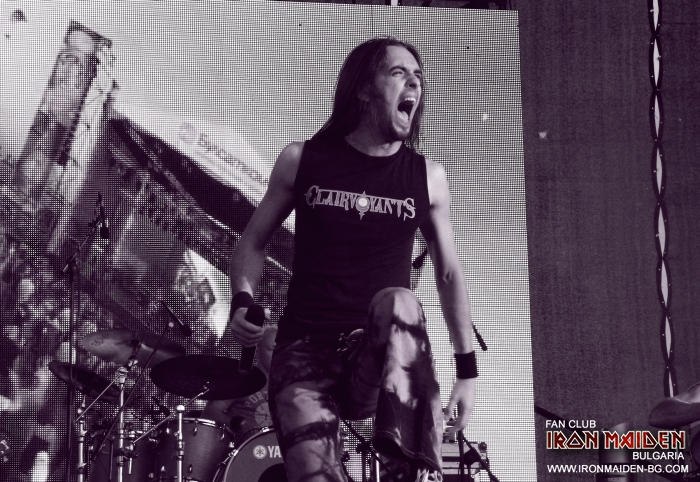 Yes because Dennis told us that some of the songs in Killers were written even before they recorded the first album. When Dennis comes to Italy to play with the Clairvoyants we do the same setlist that we will play tonight and its always a great pleasure.. and I can say when Dennis comes on the stage you can feel something changing. His energy his attitude his way of playing is unique. Today we don't have any more players like him. He still plays like he is living in the 80's and you can feel it.

Ok excluding Bruce Dickinson. Who is your second favorite member of Iron Maiden..?

Singer, or member in general?

..... Well... I like Steve Harris very much because he is the man behind everything and he created everything. He is inspiration for so many other great musicians. I like Nicko McBrain also he is great drummer and until today I had never saw drummer playing like him he is just unique in his way of keeping the tempo and changing it. 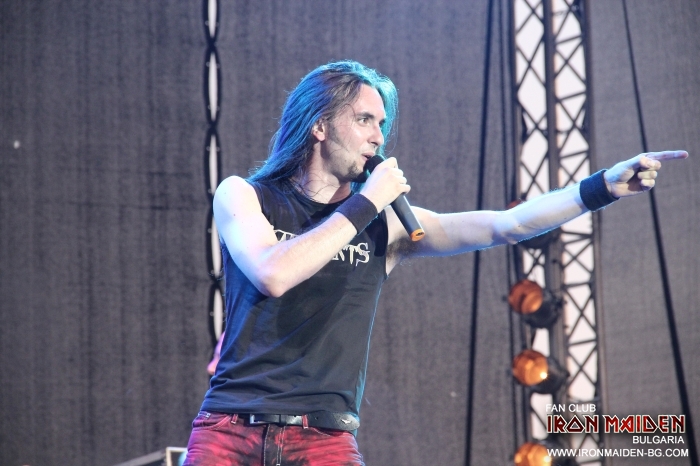 Gabrielle, you are a singer of a famous tribute band, you've played with famous bands and with past Maiden members. Is there anything more you wish to come true?

Of course! Because we are writing our own songs we want to become famous and popular because of our own music. In Italy this is quite difficult, because there Heavy Metal is popular if it comes from the big bands. You know when Iron Maiden comes to Italy they do 3-4 concerts in a row with 20 000 people all sold-out. But less popular bands will get few thousand or even few hundred people. For example when praying mantis came to play in Italy they have a lot of followers but they got really small crowd. It's not their fault in Italy there is so much popular music and there is nor really room for anything else. When we played our tracks from our first album outside of Italy, like Bulgaria, Germany, Austria, France.. It was a huge success. So we must become popular abroad in order to become popular in Italy.

How about maybe someday to be a support band for Iron Maiden?

Wow that will be great... ..A dream come true. But I'm afraid that by the time we will be good for opening for Maiden, they won't be playing anymore. ... I hope I am wrong but you never know! 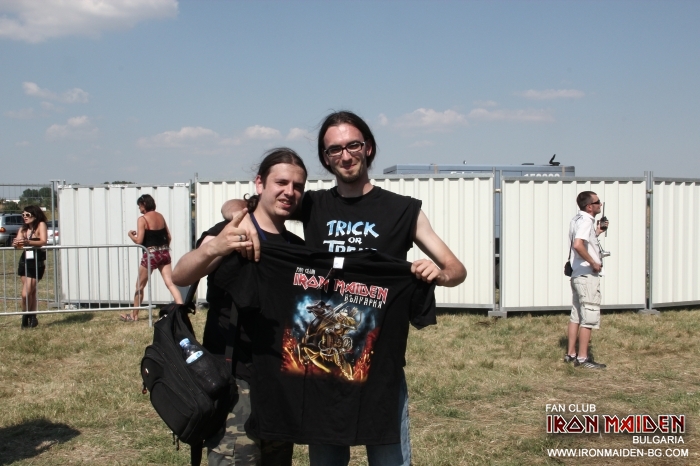 Is there something you want to say to the Bulgarian fans ....I suppose you know that we culdnt see maiden this year because of fucked promoters. And all the fans are really disappointed. What is your message?

Yes I know about that and I want to say that when these things happen it really sad and most of the times it's not because of the band. Don't get angry with Iron Maiden because probably it was not their fault at all. And what I want to say to all the Bulgarian fans is that when we all listen to Iron Maiden we listen to almost every heavy metal band that came after them. And if you have a band try to add something new and go forward and build on top of what they already build for us.

Defiantly yes! If this festival (Aero Rock Starz) continues next year or the years to come I hope we will be able to come here and play with the Clairvoyants.

Thank you hope to see you again