Hello, Dennis! I'm really happy to see you. It is a childhood dream to meet you.

Thank you very much.

I still remember when I was 5th or 6th grade and I had a jacket with badges and patches and I had written your name on it but with a wrong spelling?

What? How could you?

Yes! The bigger kids were reacting the same way.

Yes, they were beating the shit out of me. So it's like a dream come true for me right now and I'm really nervous so please excuse me.

No, don't worry. You are fine!

So, this interview will be published for the Bulgarian Iron Maiden Fan Club.

And most of the questions will be about your time in Iron Maiden.

You are doing The Iron Maiden Years tour right now.

No, it's just this festival for now.

Oh, really? So we are lucky to see you then and if I'm not mistaken this is not your first visit in Bulgaria?

No, I came couple of years ago as a best man of a friend of mine's wedding in Stara Zagora and I loved the place. While we were here I did some interviews for the radio and they asked me if I will ever play here and I said that I would love to. The reason why we have the Iron Maiden setlist here is that for 4 years I have played in Italy and other European countries and festivals for IRON MAIDEN CONVENTIONS and I worked with a band in Italy called THE CAIRVOYANTS.

Oh yes and Gabrielle is going to sing with us today. He is here. 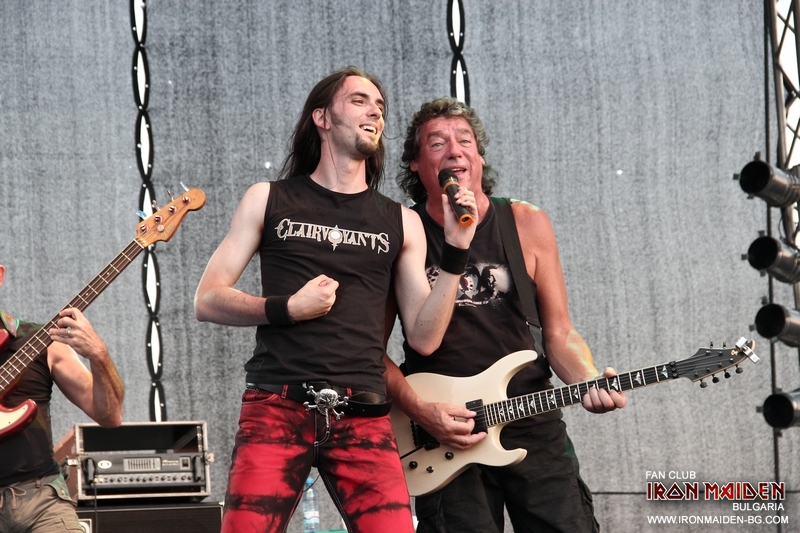 In Italy the band wanted me to go as a special guest and everyone loved it. The new generation of IRON MAIDEN fans had never seen me playing the first album so that's how it started, 4 years ago in Italy. Two years ago we were invited to play the set from the first album in South Africa. So I said to the band that I play in London with, that we are going to South Africa and they learned the set.

Today a friend of mine from Holland is going to be here. He had seen you with Iron Maiden in 1980 and is really excited that he will see you again after 30 years.

It will be done. But how do you feel playing these songs 30 years later?

Well the good thing about me playing the songs is that for the last 4 years I have played them in Italy with THE CLAIRVOYANTS which is a big plus because they are such a great band. And the kids that come and see me doing the IRON MAIDEN set is something special for them because the band is not doing it anymore. 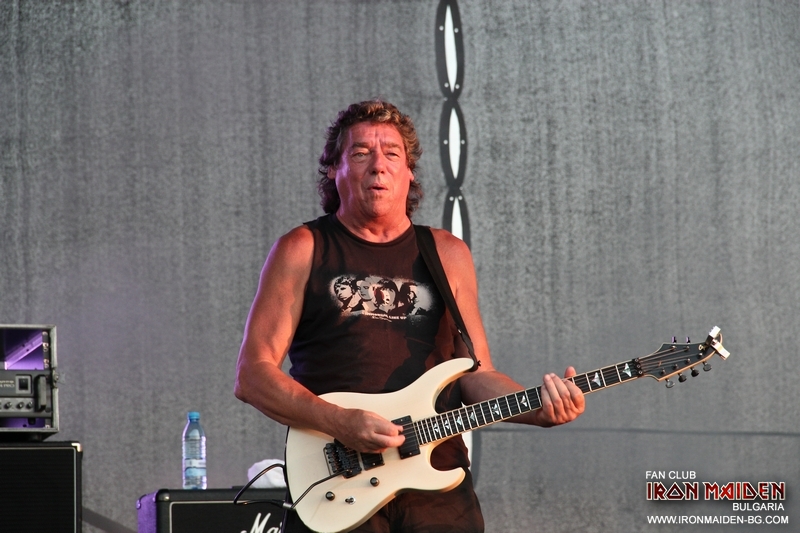 Speaking for the festival, what do you think for the lineup of the show? How do you feel playing with all the other bands like PRAYING MANTIS X-UFO WEAPON, OD SAXON. Is it like meeting old friends?

Well as I was playing with Mantis for 15 years we are still very good friends and we still see each other in England, but this was my idea. We did a festival in England with OD SAXON and PRAYING MANTIS. And when the promoter called me and said: "I want you to play in Stara Zagora", I said: "What if we get Praying Mantis and OD Saxon? ". The reason is that we all get along really well together. So there is no problem we are all friends. Rocky Newton and Clive Edwards from X-UFO were in Lionheart and we are good friends but we haven't seen each other for many years.

One year ago Paul Di'Anno was in Sofia and I had the chance to make an interview with him, and to be honest he was really strange guy. I asked him about you and Clive Burr and he didn't want to talk about you and only spoke for Clive. So what can you say about that?

Nothing. That man is a fool. He is an idiot!

He was in jail recently and...

OK, can you tell me the story between you and him? What actually...?

No, I don't want to talk about Paul Di'Anno at all! Sorry.

Yes in Japan! Clive was always a close friend of mine even before he joined Iron Maiden. He was working with little band from east London and I took him to rehearsal with Iron Maiden. We were always good friends but after my split with Maiden I haven't seen him for many years. We still ARE friends but because of his illness I don't see him anymore. 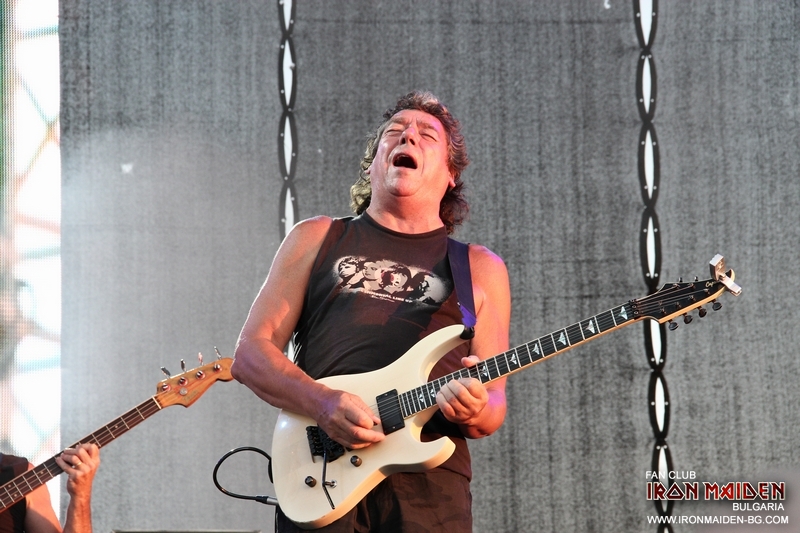 There were some conventions for him - The MS TRUST FOUND, Clive Aid, and he appeared on some of them.

Yes. Whenever there is something like that I will be playing

OK. What are you doing actually now? You know – concerts, recordings?

Right now I work with band in England. Also a lot of Iron Maiden Conventions in Italy with The Clairvoyants. I did also some work in England for an Iron Maiden conventions with couple of UK bands. So I'm quite busy.

Can you say something about Iron Maiden right now? At the moment they are on a different level.

Oh, yes. They have been for many years. Well they always have been very big band and they always will be. And they were never going to be if Paul was singing because they needed someone with higher voice.

Of course. I told him that. They needed better singer and Bruce does fantastic job. You can't blame IRON MAIDEN for what they have done. They are the biggest band in the world.

Not even, you know, after firing you from the band?

Oh yes. They are always going to be big. 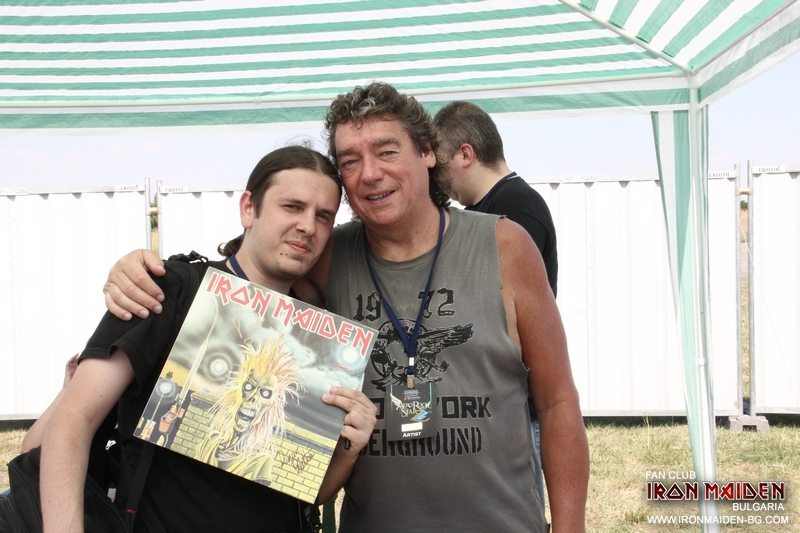 I know that the management of Maiden is responsible for your departure.

Yes but this is not important. Steve had a vision, a dream. That is important and Maiden are going to be big whoever manages them. They are just massive and I thing it will stay this way for many years. I was in Steve's studio last week mixing some recordings for our live album. So maiden are coming to play in O2 Arena in London. I was told by Tony Newton (Steve's best friend) that Steve said that when he comes to play in O2. We must have a beer together. So I will have a beer with Steve. I have no problems wit him.

I suppose you know what happened with the Bulgarian Maiden fans few weeks ago.

With the Sonisphere? I heard it was canceled but I don't know anything about it

There were a lot of disappointed fans and I think they will be here tonight.

What can you promise to them?

Well they will definitely have great time with us Praying Mantis, OD Saxon, X-UFO, Weapon and Perfect Stranger. You know Angel - the guitarist of Perfect Stranger is one of the best guitarists I ever seen in my life. Oh they are starting to play right now.

I don't care. I just want to play in Bulgaria.

At the end can you give message not only to the Iron Maiden Fans but also to the rock fans in Bulgaria.

All I can say is that all the fans in the world are fantastic people. True fans that will follow you everywhere. And we as musicians need them because without them we are nothing. 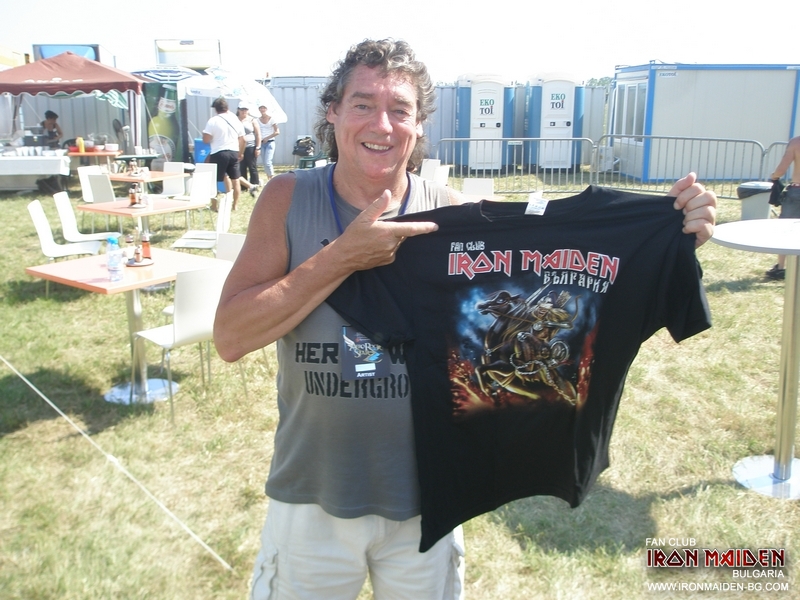 Thank You very much for this interview.