Hallo Paul ... if I'm not making a mistake this would be your third visit in Bulgaria?

No,not at all I'm really tired and Im fucking trying to stay awake for theshow. This is the longest tour I've ever done. We are on the road sincelast October and we will be 'till the February. We've visited 66countries so far.

Everybody knows that you came from punk music.

So do you think you can go back to punk and do a punk album. If I am right you were In a punk band called the Pedophiles?

Oh Yes It was a band in England where I lived. Nothing serious really. We never recorded anything so you cant find it on the internet. We were playing lot of punk stuff covers like Ramones and Sex Pistols but those thing don't sell man.

You are playing Ramones cover on your set now.

Yeah we had a lot of ideas for a cover songs but I love that song. 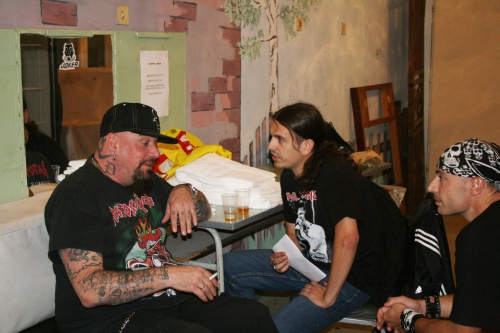 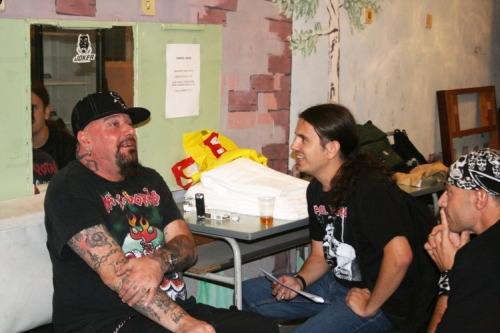 During your long career as a musician you've met a lot of people some of them were good some of them not. And unfortunately some of them are not among us anymore like Bon Scott and Phil Lynott. Which person you miss the most

Whell I defenetly miss Bon a lot I met him when I was 14 we were hanging out together.
I miss Phil too. He was a great guy .. All of the Thin Lizzy guys were on my wedding in Scotland.
I miss Dimebag Darrel from Pantera ... I don't see him anymore too...
But that's the reality man.

You've mentioned Pantera... Your "Menace To Society" album sounds a lot like Panera and...

Oh.. yes I know why people say that ..At that time we used samples. And I think That Steve took Vinnie's Bass drum . or something like that

It sounds quite different than "Murder One"

That was the point. We didn't want to do anything like murder one. Because we spent so much money recording it and producing it but when it came out we almost didn't pay back the money. It was a bit too heavy metal for me... but not heavy enough.

I've read somewhere that you have a band and a wife in every country.

Arrrrg oh wives I'm done with wives I have only ex-wives (laughs)...You know wives cost a lot of money.. But bitches are fine (laughs). Oh sorry...I have a girlfriend back home. She is a Bosa nova singer. And lets Go back to the bands.. Yes I pick a lot of good local bands because if I bring my band from Brasil this will cost a'lot and they are not all the time available. Right now I'm with my youngest Italian band

So who are they?

They are Children Of The Damned.
Matteo on the Bass is over there......Rise your hand you cunt!!!..The fat guy is Carlos he is a TV star guitar player...(laughs). Gianluka on drums and Michele on guitars.... The are all Gay (laughs) Kidding of course ..they are OK 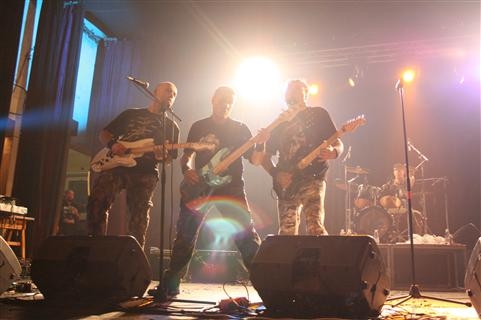 I didn't started the topic for your wives accidentally ..you had also a Bulgarian wife .

Yeah she is here probably, but she don't want to see me. Why Is she so mad, I just want to say Hi, how are you doing ...give her flowers say "Hello".. nothing more.. What does she think I want to do ? ... I defenetly don't want to fuck her anymore.."Ive been there, Ive done that"... and it wasn't that good (laughs)

Paul ........Its Impossible not to talk about Maiden

So you don't want me to ask you anything abut Maiden....

Well you won't ask me anything different. I've been all over the world and everyone asks me the same fucking things so you can find it the over the Internet.. (laughs)

Ok we will try to circular around that topic....You met Blaze Bayley in Turkey and you were together on stage.. He was in a fight the previous night ..

Not with me! (laughs) Yes he had a huge shiner on the eye.. He is really cool guy. But then his wife got sick and died .. really sad story.. poor guy...I haven seen him ever since.. we were suppose to do show together in Romania but it was canceled dew the lack of money..
He is great guy.. I hope he is OK.

Paul... I will ask you about Maiden

Can you see yourself now in Maiden?

Not in a million fuckin years ..Never ever EVER!

I wouldn't be .. I would left a long time ago No no. The are great band and what they do is Fantastic. No one can beat them in that stuff.. But that isn't who I want to be.. I want the band to be more punk ... even more brutal ...

But that will never go with Maiden..

No.. and it shouldn't..
If there is a final tour and everyone is involved... Unfortunately Clive cant do it ... Yes I will join them... We don't hate each other. I Love the band we were mates and I will defend them to the end. But we are different .. they are they and I am who I am. They want to do things like The Number of the beast.... And I like bands like Pantera Metallica and Sepultura..

What's wrong with the number of he Beast album .?

Nothing! Its great album no one can beat it. But I couldn't be in it I cant imagine myself there .. I hope Maiden can still go on for many years because their songs mean something you know.. its not like to get an album with eight different covers just to make more money... that for me is wrong

Back in the 80's you've played mainly in the clubs

Do you remember a club called the Bridge House?

Oh yes I knew the guy who owns it.. There use to be Brige house festivals

Were they reccording every band played there... ..

Not fine at all ..He is really sick man. Ive done few Clive Aid things for him in England and in Paris ...Clive cant even speak anymore mate....

Is he the one you most respect from your years in Iron Maiden.

Clive and Dave.. We were always together .. I don't respect Clive.. I love him he is my brother. I miss them both very much

Thank you Paul that was my last question

Thank you mate have a great night