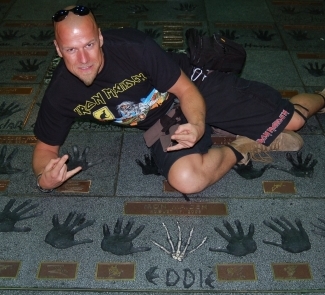 Hello first of all its honor to have this interview

-Well I?m happy that I can help out.

When I first saw you and I learned about you was when you added Maiden Bulgaria on My Space and the only thing that I was able to say was WOOOOOW. You have quite huge collection of Maiden things. Please give us a small description of what exactly are you collecting?

-I really collect all different items I can find with Iron Maiden but I really like stuff that I can display in the Bar collection ,its nice to have stuff to look at and not just another record from a new country. -So I really like promotion stuff and stage used stuff and items that just look?s cool.

Lets explain for the people that haven't seen photos (they will see in this interview).. So you have some sort of personal IRON MAIDEN museum and in the same time it is bar am I right. This is the dream come true of every maiden fan. Please tell us more for this BAR MUSEUM?

-Well it all started as an idea of having a Hard rock Cafe but only with Iron Maiden items. I had collected for many years and then I just got the idea and then it just took off from there. So when me and my girlfriend got a house ,we wanted to have a big basement for the iron maiden bar /collection and then it was just starting to find a lot of frames so we could display a lot of the items I have. We build the Bar in the Basement and calle?d it rasmus Bar and hopefully it will be a real iron maiden bar like Eddies Bar someday. Now I have over 500 Framed iron maiden items but a lot more items that are not framed. And it take?s up 100 square meters in the house now. 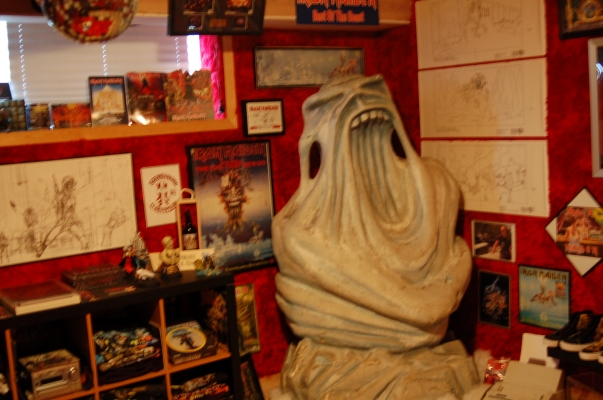 I suppose you have something which is most expensive for you in the
collection. What is it?

I have the original Painting for Fear Of The Dark that was done by Derek Riggs but Maiden never did use it . I really like looking at it and feel that maiden did?t got the right artwork for that record ,even that the artwork is nice ,I think that Derek did a better job. For me that is one of the most cool items I have + I also have some original Somewhere in time drawings from Derek and a ice berg Eddie probe from the stage set on the Seven Tour in 1988 and a Eddie prop head from 1992 FOTD album cover backside photo. I also have some Drapes drawings from 1990 from the stageset and hahahah I just have a lot of cool stuff –come by and see it , its more fun and there are many nice story?s to talk about also.

I have a friend who says that Iron Maiden is like the tattoos and piercing ... and drugs.. If you start.. there is no turning back... Now he is buying everything with the IRON MAIDEN logo. How and when it all started for you?

-I?m like that ,I really buy every thing with Maiden I can find ,but its not like I have to do it –I do it cos I like it and sometimes I don?t buy anything for 1 month cos I don?t feel like it. You have to be care full ,cos it can get to you like a drug if you don?t look out. For me it started when I got a copy of the first iron maiden album and I just was hook?d on the eddie cover –from there the music did the rest and the madness could start. 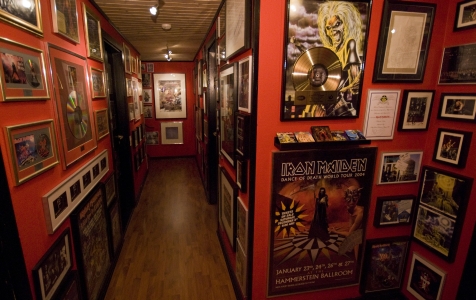 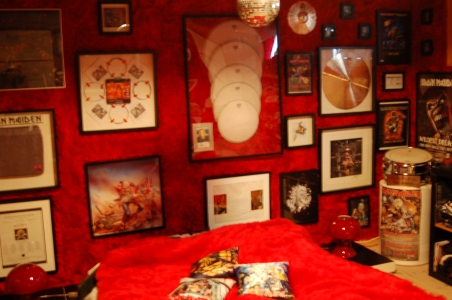 ..Which is your most expensive Maiden related belonging?

I think that my Iron Maiden 1-off Pinball Machine is the most expensive–cos I had to travel with a friend to another country to get it and geta car that could have it inside and use 1 weekend to go get it inBelgium-that cost me a lot of money machine ,travel ,car rent and food,but it was a nice trip... 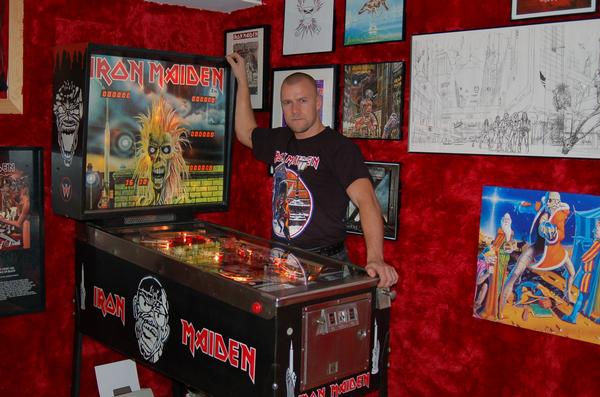 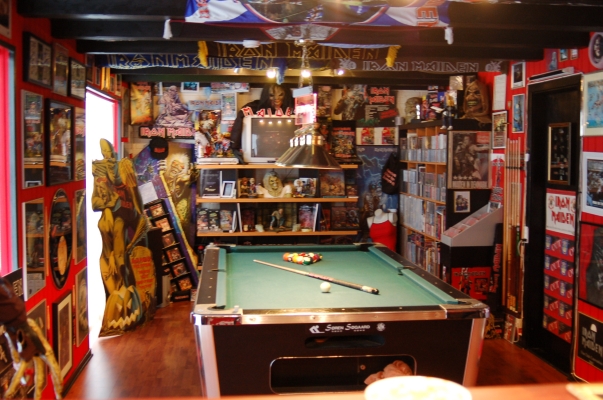 Is there something that you don't have but you want it a lot?

-Sure ,there are a lot of items that I look for ,like some of the earlyEddie masks from the stage show or the Edhunter promo lighter thatlooks like a Gun,-there are so much stuff out there and you will neverhave it all –but we can try hahaha.

-Well I started when I was 8 and started to collect when I was about 10 years old. I don?t think that I will ever stop.

-I have seen Maiden over 100 times ,after the #100gig in L.A. last yearI don?t count anymore ,but It well over 115 now. -I try to see Maidenin 1 new country on every tour but last tour it was really great cos Igot to travel to soo many cool country like Australia, Russia, Brazil,Chile, Peru, Argentina, Finland, Sweden, USA, Dubai and it was reallygreat to party with fans all over the world. I still want to see Maidenin Africa and hope that they will do south Africa on the next tour,thatand china would be great.

We all know that its not cheap to be a fan and especially a Maiden fan .. What amount of money did you spend for Maiden?

-It all ,hahaha I really don?t know how much –but it is a lot and I don?t regret it one bit. I think that japan was one of the most expensive country?s to travel to, but also one of the greatest and after that I still wanted to travel more

What are you doing for living?

I work in the ARMY where I?m in the bomb Squad (EOD) It?s great –I can work up a lot of free time where I can travel to see Maiden and I can also get a lot of the time I save pay?d out in cash so I can buy more Maiden stuff. 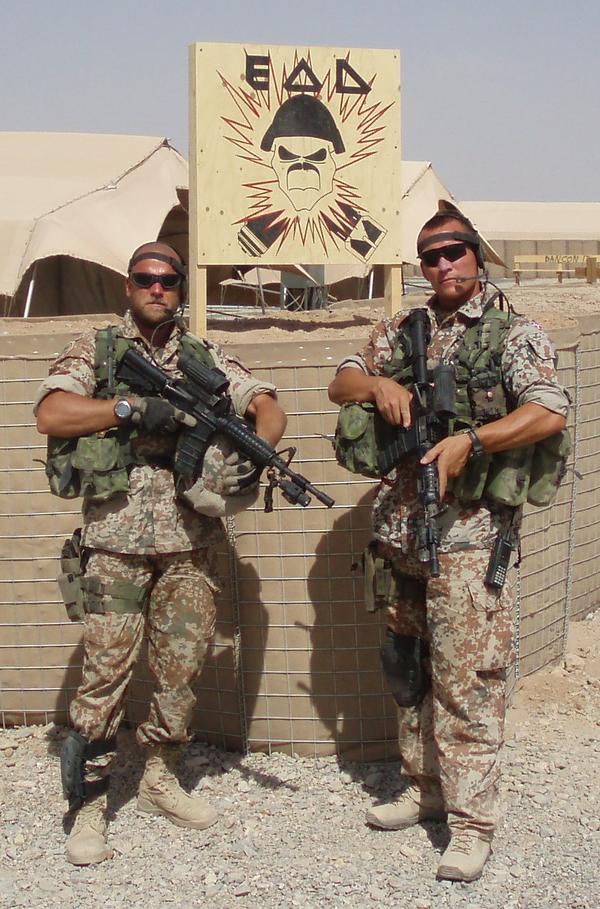 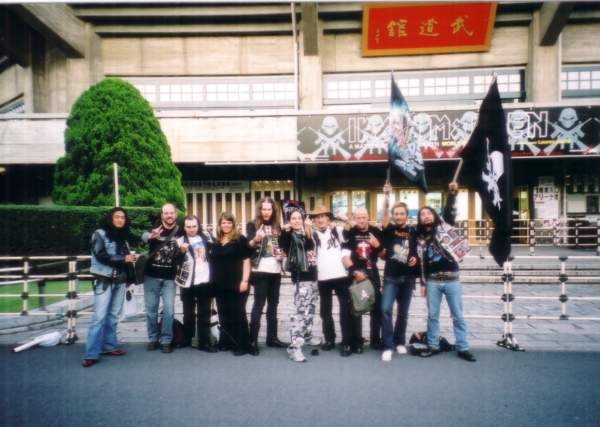 Do you accept guests from other countries in your museum /Bar? Maybe someday I will come and drink few beers.

Sure I have people from all over coming to see the bar ,like now in 1 week I will have a girl from Peru (ULI)staying here for some days ,she is a big Maiden fan that I met when I saw Maiden in Peru. I have had people from the US ,Japan and Switzerland staying here and fans from Germany,Sweden,Norway,Finland and the UK have been here to see the Bar

There are many rumors about Iron Maiden ending their touring career in 2013. What do you think?

I don?t care cos lets face it ,no one knows when Maiden will stop ,not even Maiden , so lets see if they not end up like rolling stones and plays to they drop. I?m sure they can?t stop –but we will have to wait and see 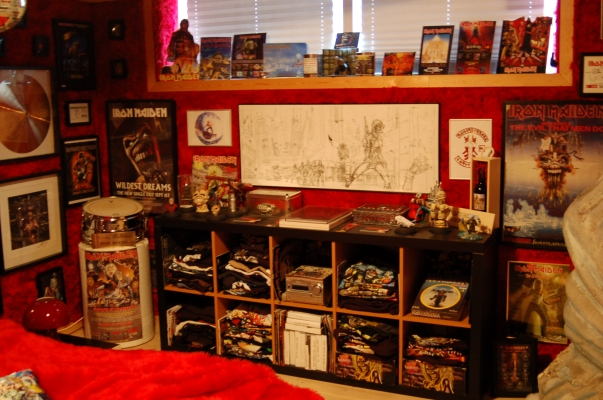 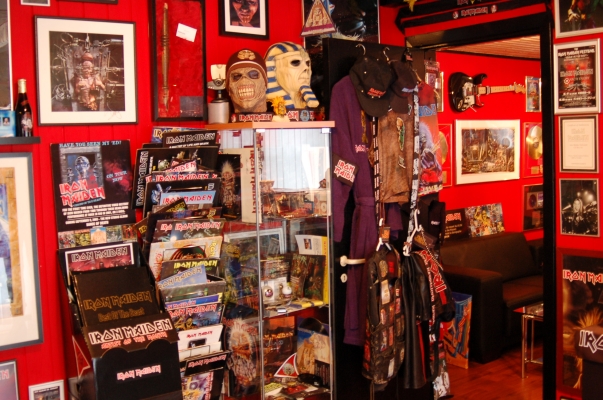 How do you imagine the end of Iron Maiden?

There will never be a End of Maiden ,even if Maiden stop playing ,therewill still be a lot of fans and they will go to meet ups and see covershows and the collectors will still collect. Just look at all the Elvisfans that still around –Maiden will never end.

Did you met someone from Maiden? Who and how?

-I have been blessed to meet all of them many times and also got a SFP(super fan pass) on one tour ,so I did?t have to buy tickets for any ofthe shows on the tour. So when you see a lot of shows you will meetthem backstage and at hotels and Bars and even in the airport. I alsogot to try out the Bruce Air many times now and it's a cool way to meetBruce and fly with him. Best meet was in Chile where we where on thesame hotel and was hanging out in the bar with all the members andcrew. Most of the time I like more to talk to the crew then the Maidenboys.Cos the crew has really cool stories to tell and you don?t want toask the same old things to the band members over and over again. Butgoing on stage with them is really cool and I have done that 2 times 1in 1996 with Blaze and again on the last tour in horsens Denmark. Itssomething I hope all Maiden fans can try just one time 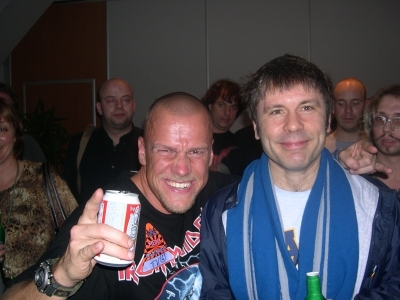 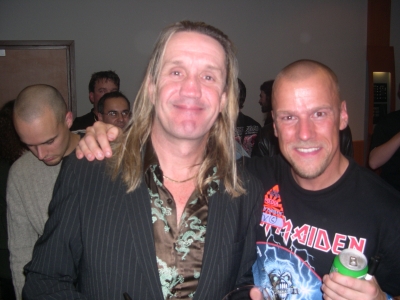 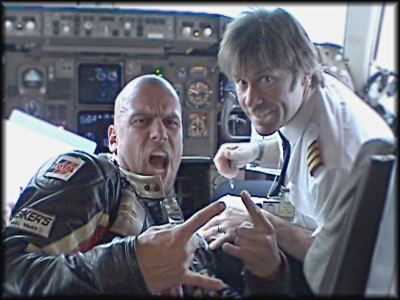 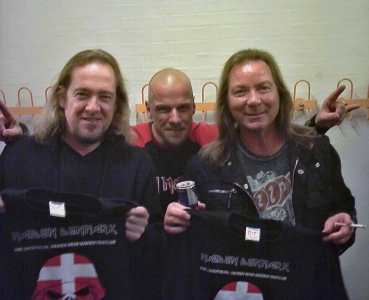 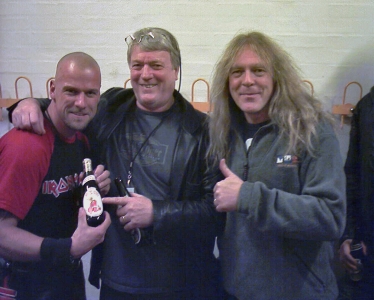 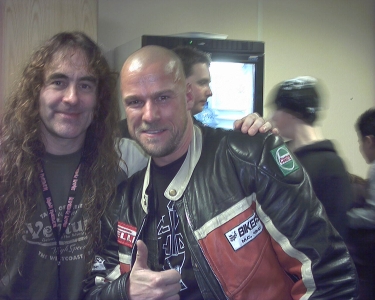 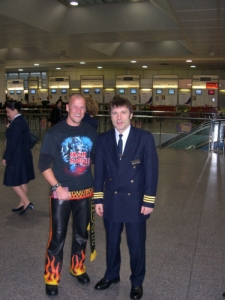 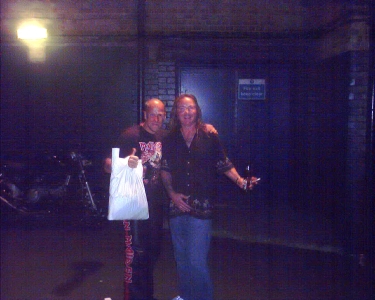 For me Iron Maiden is just happiness with all its glory.

What do you expect from the next album?

I don?t expect anything –I know it will rock the hell out of us. IronMaiden will always deliver and I?m sure the next album will be like therest of them (The BEST)

Your favorite album? Why?

-I have to say Piece Of Mind cos I just love the songs on that albumwell I like them all on all the records but this one is the one I puton the CD player the most. 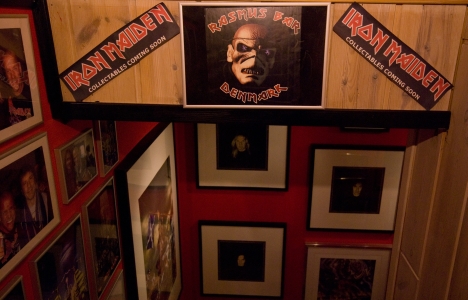 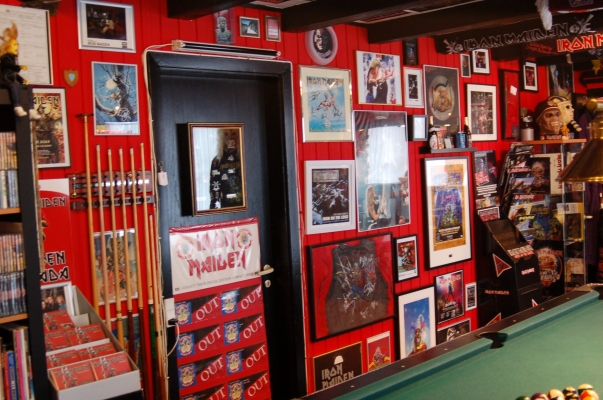 If you can go really somewhere back in time which tour you would like to see?

It will have to be way back in the "70s, just hanging out on one of thebars and seeing the young band shocking the people in the pubs with theraw music. Must have been great to see them there.

Which is the best Iron Maiden artwork for you and why?

That?s not easy , so many great eddies –but I like Derek Riggs work themost and will have to say Seven son. It's a cool painting and fit verywell to the album. 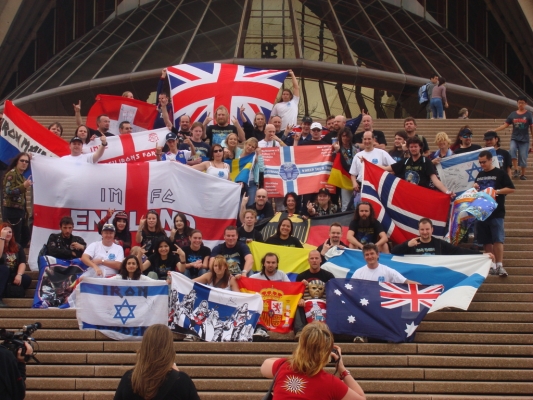 ts a cool site and I like the ider that you do this profile thing with diffrent fans out there.I also work with the Danish Iron Maiden Fan Club www.maidendenmark.dk So I know how much work there is behind a site like this. Great work and keep it up ;-)

Hi Guys and Girls of Bulgaria ,I hope Maiden soon will come backand play your nice country and if they do I will be there to rock withyou. If you see me on tour –come up and say hi ,its always nice to talkto other Maiden fans and you know you are the best of them right ;-) 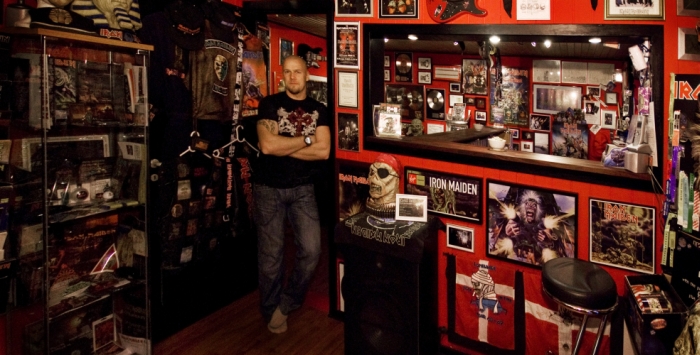