Hello Rafi first of all its honor for us to speak with fanlike you, And thank you for agreeing to be the first person interviewedfor our website.

Thank You, it is my pleasure.

Ok the first question is of course How it all started.. How did you became a maiden fan?

TheNumber Of The Beast was my first Iron Maiden record and after I gotSeventh Son Of The Seventh Son and that record was the one that make mereally love them, but the real moment that make them to be my favoritewas after the first time I saw them live in Tel Aviv in 95.

Total 42 , on this last tour of Somewhere Back In Time I saw them 15 times.
Here is a list of all the concerts I went to: 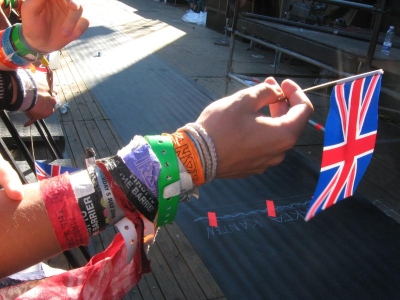 Here is a list of all the concerts I went to: 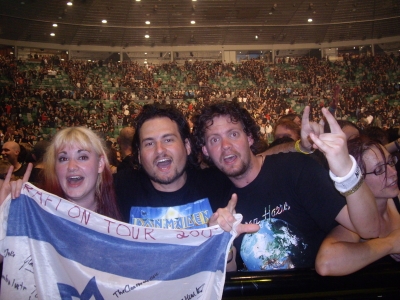 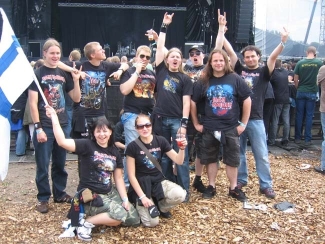 As we are on the topic for the 2008 tour. Which countries did you visit for the gigs?

When and how did the idea to attend so many gigs came up?

Before the A Matter Of Life And Death Tour start I was feeling it could be the last tour of Iron Maiden.

We all know that its not cheap to be a fan and especially a Maiden fan .. What amount of money did you spend for your tour?

Yes It is lot of money and this why when I travel I try spend as less as I can like stay at hostels and most cheap way that I can use my transportation. All my money I save only for Iron Maiden tours. 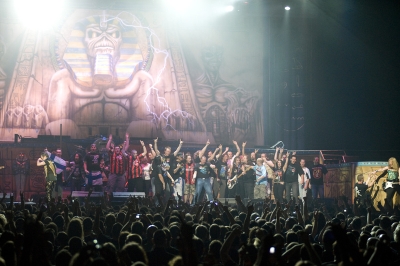 Which of the visited countries, you like the most?

Australia, maybe the best audience I ever see.
they are so great people and got to meet lot of friends from there and it's a great place to travel.
Scandinavia (include Finland), the capitol of metal everywhere you go you see metal head fans and you feel like you in maiden festival, the Vikings Rules!
Now that I thing about I saw iron maiden all around the world, I saw them in the most west part in California, the most north part in Trondheim, Norway and the most east and south part of the world in Australia.

Which is the most special for you show from this tour?

Sidney, I was on the stage on Heaven Can Wait.
It's a dream that come true be on the stage with iron maiden it was so great!

Some one who won the contest invite me to be as his guest and just before went to stage I was thinking to myself that after all the dedication I did for them I deserve to be on stage!. 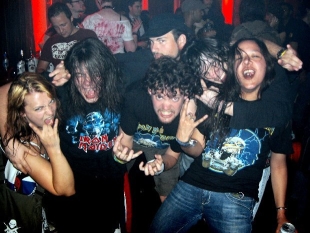 Did you traveled alone ore there were friends with you?

With friends, those friends are Iron Maiden fans I got to meet during iron maiden tour.
People ask me how come you go more then one show? Is the same show with the same setlist?
They are so wrong, is much more then that, it's about go meet lot ofgreat people before and after the show in a pub or a meet up to hangout with them.
Lot of times before the show we make some meet up in some pub meet andalso get to meet the locals fans.

Have you met other fans like you which traveled so many miles just to see Maiden?

Yesthere are lot of people I know who travel to see Iron Maiden, I evenknow few peoples who go almost every show of the tour!!!
Forexample a friend of mine (from Norway) took his 2 girls who also maidenfans for all the concerts in Europe on the last tour, he spend morethen 20,000 Euro for all the flights, hotels, food, transportationstickets and merchandise.
My friends (from Finland) who went to India told me that the localperson give them the ticket for the show for free just because theycome so far away.
There is one from Japan and one from Argentina that travel almost everywhere.
When I was in Australia there was more then 50 fans who come all the way from Europe 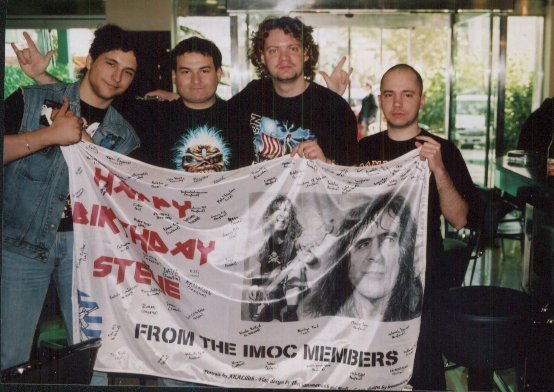 Please tell us for any interesting of most memorable moment from your adventure.. and please don't spear us anything ;)

On the last show of the tour of A Matter Of Life And Death in London Earl's Court it was same day that Dave Murray had his 50 birthday so I had an idea to make a flag that said "Happy Birthday Dave" and get it sign by about 50 Iron Maiden fans from the fan club, lucky me I got the first to the barrier wristband so during the show I was stand on the barrier with my flag and all the band members always smile at me, and then after the encore Bruce ask for the flag and show it on the stage and all the crowed sing Happy Birthday, after the Show I give the flag to Dave Sullivan, Jeff Daniels and Terry Rens (ex Iron Maiden) who work in Eddie's Bar in Portugal and they put the flag there.
I did the same thing for Steve Harris's Birthday in Athens on the A Matter Of The Beast tour.
On Athens because the security mess up with open the wrong gates so me and all the fans who got the wristband to be first to the barrier got a big apology from the manager of the venue by give us free beers as much as we want during the show!

After not sleep after the show in Grasspop festival and see them again next day in Brixton Is like I saw them live 2 times in one day! 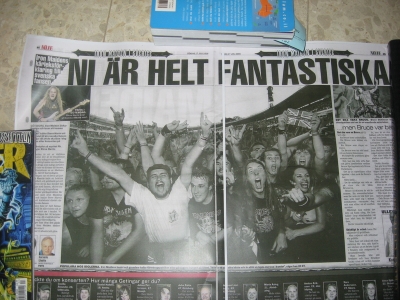 One time I stand on the barrier with my Israel flag and then was some moment that Bruce stare at me with big look like what the fuck?! only after the show I realize that it was because I also had the Dubai event t-shirt.

I got to be on front page and also in the middle pages newspaper after the show in Gothenburg.
Because most of the times I saw them on the barrier some of the band members know me very well, one time when Adrian Smith throw me his pick guitar and saw I did not got it he come again to me and throw it right for me, next show when the first time he saw me he smile and give me thumb up.

In Australia I had the best time of my life, travel there 2 weeks fromthe west to east and saw iron maiden 6 times, meet the band members,and be on the stage.
In Melbourne we had great meet up before the show it was more then 200 people include the Crew who make DVD for this tour.
In Sidney we had big BBQ party and day after we all the fans fromEurope take a pig photo group picture everyone have flag of his countryin the Opera House. 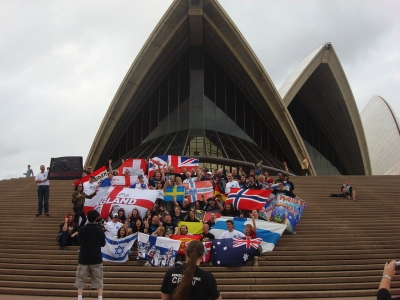 Day after the show in Stockholm the big ferry from Stockholm to Helsinki (maiden next show) was full of maiden fans, it is so fun to travel in transportations from show to show with all the fans.
In Trondheim, Helsinki and Tampere because the night come only after midnight it was so rare to see Iron Maiden full show in day light no wonder we sing Fear Of The Light.

Did you met someone from Maiden during this tour or at any other?

Yes, on A Matter Of Life And Death tour I meet Bruce Dickinson on Bruce Air 666 to Stockholm.
On A Matter Of The Beast tour I Meet Janick Gers in some pub in Rome.
On the Somewhere Back In Time Tour i meet Dave Murray, Janick Gers and Steve Harris after the show in Melbourne in some Irish Bar.
Got to meet Janick and Steve again after the show in Helsinki in Irish bar.
In Split I meet Nicko McBrain day after the show.
Adrian Smith who is also my favorite member he is the only one I still did not meet 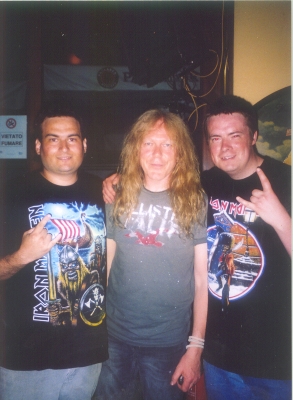 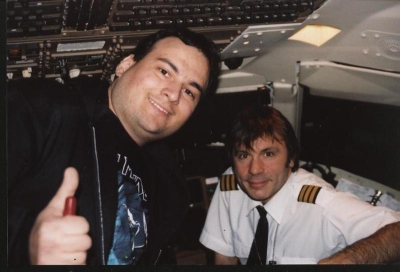 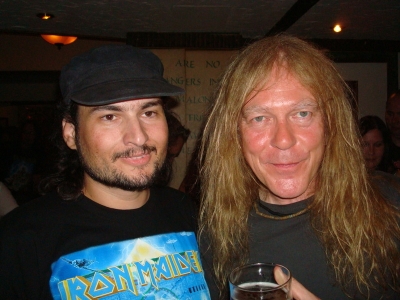 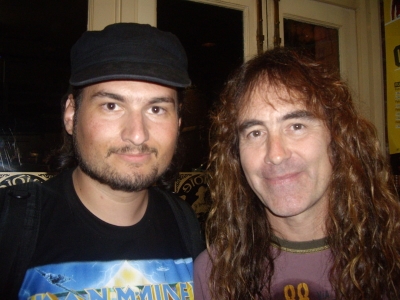 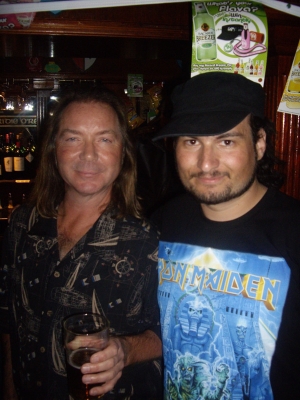 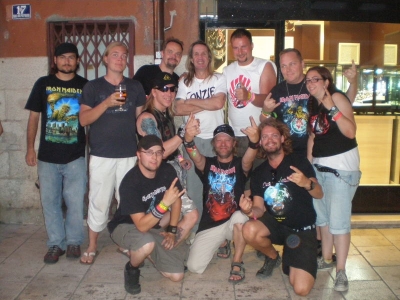 There were a lot of discussions about Maiden's setlist for this tour please tell us your comments. Would you change it in any way?

I love the set list but I was surprised they put in Fear Of The Dark cause is not from the 80 and they play it every tour.
I never really care about the set list, I fine with whatever they play.

Which is your favorite Maiden album and why

Seventh Son Of The Seventh Son because it's also concept album and A Matter Of Life And Death because it's have so many epic song include my favorite song The Reincarnation Of Benjamin Breeg.

Now I found out that the best thing in life that get me up in the hart time is Iron Maiden.
Just to thing about the next tour with all the fun I go to have again... can't wait!
I have now lot of new friends thank to iron maiden.
And there is music that can't never get me down (not like sport).

Which is your most expensive Maiden related belonging?

The sticker entry of Heaven Can Wait on stage.
The newspapers who show me on the Front page and the middle page of the Gothenburg show.
All the signatures and pictures of me and the band members.
That's all I am not a big iron maiden collective cause I save my money only for the tours 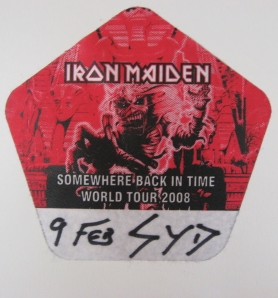 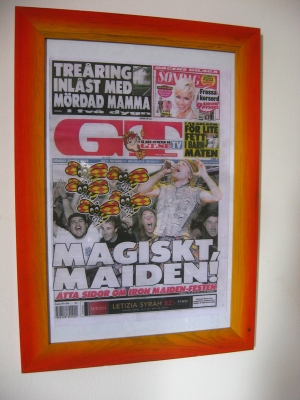 If you can go really somewhere back in time which tour you would like to see.

I would like to see them live with Clive Burr on the Number Of The Beast Tour.

Which is the best Iron Maiden cover song for you and why?

Ilove the Cover they did of Doctor Doctor, love that song and every timethey put it before the beginning of the concert it is get me into avery good mood.

It'slook great, I also did something for the community of the maiden fansin Israel but it did not survive cause of lack of fans here.

Hope to meet you in Iron Maiden Concert in Bulgaria. 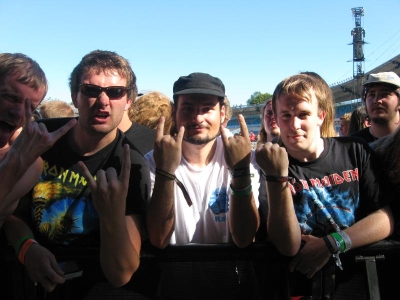 Visit this page for more info about Rafi's tours

Here you will find a lot of pics ftom Rafi's journeys