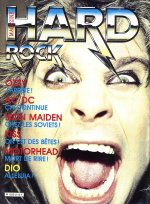 A 13-month world tour through 25 countries (including Tibet!), 220 shows, 120 000 Watts for the PA, 700 spotlights, 6 huge lorries, 5 tour busses, Iron Maiden strike hard this time.
Powerslave, the new album, is a real masterpiece. Hard-Rock Magazine met Bruce Dickinson who tells us about this fantastic tour and the new album..

So? Have you heard it yet? No? If you haven't listened to Powerslave yet, you'd better hurry, 'cause you're missing out on something really good. Iron Maiden's last album is really the best one the band ever recorded. Even if you're not a fan of the band, you're still in for a treat. Enough said.
Iron Maiden didn't only release an excellent album, but they also embarked for one of the greatest tours ever organised by a Rock band. France is one of the first countries to be visited by these giants of Metal and some of you may be lucky enough to have seen them already. The others will have to wait until the end of October or the beginning of November...
Before Iron Maiden started their tour, Hard-Rock Magazine could discreetely enter Bruce Dickinson's hotel room in order to listen in exclusivity to the new album and to have a good chat with him. Naturally, we started to discuss the new album and the world tour. 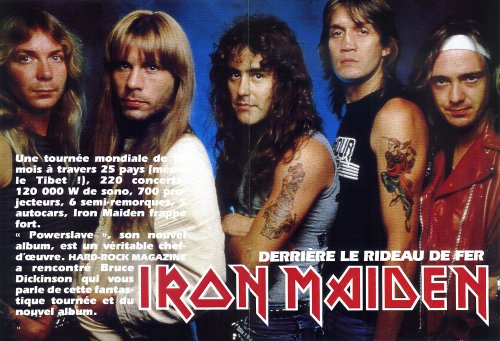 What have you done since the show in Paris last year?

We ended the tour in Germany. In January, we took some time off. Then we wrote the new material in Jersey before going to the Bahamas with Martin Birch, our producer, for a seven-week recording period. The mixing was done at the Electric Ladyland Studios of New York during May and June, then we rehearsed the new songs for five weeks in Florida. I'm just back from there.
At the end of July, we'll shoot a video for two days in Hannover, then we'll be off to Poland for the start of our massive tour that'll last for a year and will cover the whole planet: Hungary, Australia, New Zealand, Bangkok, USA, etc... It's the first time that a Heavy Metal band plays behind the Iron Curtain, and we're proud of it.

Will you also play in France?

Of course, there will be gigs in Annecy and Palavas-les-Flots in August, then in Toulouse and Bordeaux at the beginning of September. Then we'll be back in October for several dates, including one in Paris (on 30th October). We're hoping to get Motley Crue as a support-band. We need a good band and I think that this one is up to their reputation, and they never played in France. (Note: It's confirmed! Motley Crue will open for Iron Maiden in Nancy, Paris and Lyons!)

I just listened to your new album, Powerslave, and my first impression is that the tracks are both heavier and faster than those on the previous albums.

Right! Our fifth album is full of energy, it's the most powerful and the one I prefer. Piece Of Mind was more or less some kind of experiment. After The Number Of The Beast, that sold very well worldwide, we wanted to do something different. May I point out that the line-up has been stable since Piece Of Mind, and that probably why the last album is more consistant and so violent. We are finally stable.

On the other hand, you've changed the atmosphere on the cover, with Egyptian pyramids and an Eddie-Sphinx. It looks a bit like the covers of Earth, Wind and Fire...

I don't know the covers of this band, but everyone tells me the same thing, so I'll have to check them out. Derek (Eddie's creator) did this painting especially for this album. Eddie ha evolved, we transformed him. We were getting fed up with covers dealing with gory stuff like blood, tomahawk, axe...
Look at Kiss, for instance, their make-up shocked everyone when they first started, but after a few year, nobody was paying attention to it anymore. It's the same with Eddie, he's still there (as a stone Sphinx on the cover), but he's different, bigger, more powerful. The show itself was somehow modified, it'll be much "heavier", with a bigger light show and stage set.

One thing is sure, we get our money's worth! Iron Maiden's shows match perfectly the band's reputation. But I'll say no more...
As for Bruce Dickinson, he's probably one of the nicest rock stars to interview. Not only does he give the relevant explanations, but what he says is also really interesting.