The Live After Death Video 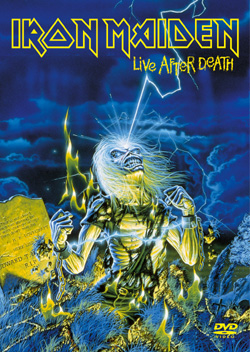 This legendary video was the very first (almost) full-length concert released by Iron Maiden. It was recorded during the four nights the band played at the Long Beach Arena of Los Angeles from 14th to 17th March 1985 as part of the  World Slavery Tour. It has been considered the best live video for a long time, and there isn't much more that can be said about it, except that every Maiden fan definitely needs it in his collection. There isn't any best way to spend some 90 minutes in front of a TV screen.

Live After Death hasn't to this day been released officially as a DVD. However, a Brasilian company has put a bootleg version of it on the market and it is not very difficult to find it in music shops. Iron Maiden's management was quite naturally angered by this and issued a warning on the official website. Their statement, published on 19th March 2003 under the title of "Bogus Product Warning!" on ironmaiden.com, was as follows:

Iron Maiden.com have been aware of the existence of a DVD featuring Iron Maiden's Live After Death video from a Brazilian company called Editora D+T Ltda that is available for sale on a number of online music sites around the world.
Iron Maiden.com would like to make all our users aware that this is NOT an endorsed product and it is neither officially licensed or of a high quality. Many of you have been asking for DVD's of all the original Iron Maiden video releases and these will be made in the future when time allows the creative input from the band themselves to ensure the highest audio and picture quality possible.

We have received and examined examples of the 'pirate' version of Live After Death from D+T Editora Ltda and found this to be an inferior product and recommend that you do not purchase it. The 5.1 sound is not mixed 5.1 sound at all and the whole package is a cheap rip off and waste of your money. We are also currently seeking legal action to have this product removed from the general market place

There is not much I can add to this official statement, except that they are right. I own a copy of this DVD and the sound is definitely not 5.1, as deceitfully advertised on the cover. Basically, it is like watching the original VHS, but on a different support. The only advantage this Brasilian release may have is that it won't wear out with time like a video tape does (I also bought the VHS when it was released and it is pretty worn-out now!). However, I trust Sanctuary to release a proper Live After Death DVD in due course.