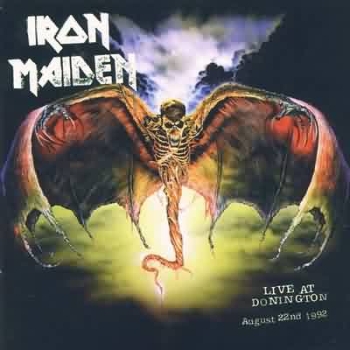 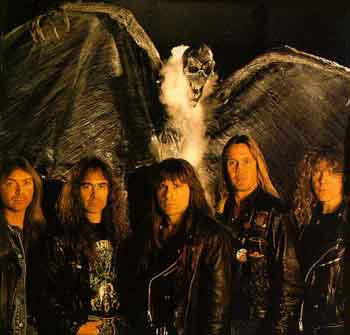 This album was recorded live at Donington Monsters of Rock festival on August 22nd 1992.

The remaster cover is different from the original one released in 1993. This 1998 remaster version contains a special enhanced CD-ROM multimedia section with videos, exclusive photo galleries, biographies, internet links plus a deluxe 24 page colour booklet with full lyrics, Eddie art and photos.

The tracklist shown reflects the original version. The remaster has 14 tracks on disc one and 6 on disc two.

This live album was recorded August 22, 1992 during the Fear Of The Dark Tour at the Castle Donington 1992 festival in front of a crowd of almost 70,000. It was the second time Maiden had headlined at Donington, and a video of the show is also available. The show was broadcasted live on radio, and was heavily bootlegged until the release of this recording made the bootlegs obsolete. However, it was only released as a limited edition and remained quite rare, and so it was re-released in September 1998. One noteworthy highlight of the show is the last song, 'Running Free', where Adrian Smith joined his former band mates for an encore. It was the first time he had seen a Maiden show since he had left the band in 1990, and the last time that he had ever shared a stage with them before the Reunion Tour in 1999. 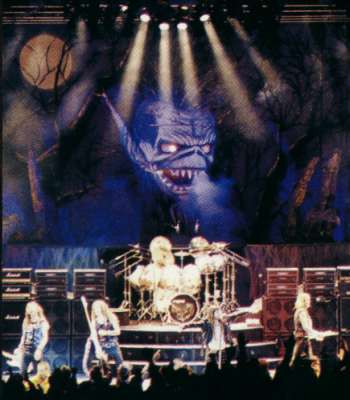 Although it does not match the immortal Live After Death, the sound quality is still pretty decent. The quality is somewhat better than on A Real Live Dead One and also has the continuity of an entire concert. Much of Dickinson's crowd interaction and song introductions are included, one of the benefits of releasing the show as a double CD set. The original version of Live At Donington (with the white cover) is very rare in North America where it was never officially released, so if you happen to see it there, you might want to grab it. Otherwise, it might still be possible to order an import copy. 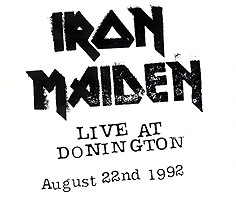 Note that for the 1998 re-release version some of the songs from disc 2 have been moved to disc 1 in order to make room for the multi-media content on disc 2. On the original version 'Fear Of The Dark' was the last song on disc 1. 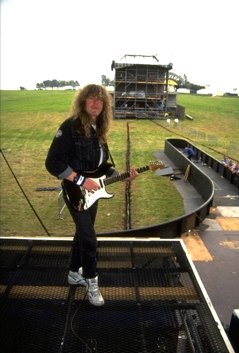 Originally released in the UK, in November 1993, as a limited edition, it's the first time that Iron Maiden Live At Donington August 22nd 1992 has been made widely available to the public; the cause for much celebration amongst long-time Maiden followers, who have always known about this golden rarity but very few of which have previously had the chance of actually owning a copy.

The soundtrack to the superb long-form video of the same title that the band had then recently released, up until now, anyone not lucky enough to have nabbed one of the original 5,000 triple-vinyl sets i.e., most of us has had to either make-do with home-made cassette copies from the video, or, if truly desperate, forced to seek out poor-quality pirates of dubious origin or cassette copies from more fortunate friends. 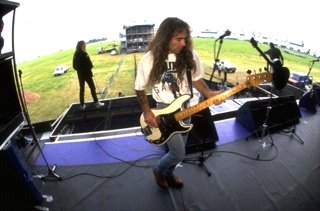 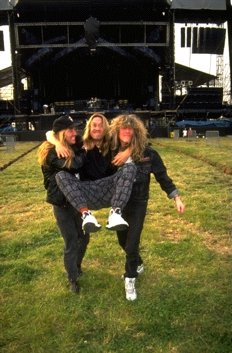 Well, not anymore. Beautifully repackaged here utilising the Donington Eddie on the cover and now digitally re-mastered for superb CD-quality sound, Iron Maiden Live At Donington... is a must-have addition to any serious collection of Maiden's work.

Bassist and founding member Steve Harris, who both directed and edited the video and produced and mixed the album, explains.
"Originally, we just wanted to put the video out for general release, but make the album like a special souvenir for the fans who had actually been there that day...
But over the last five years since it came out and immediately got snapped up, we've had so many fans pleading with us to make it available again that, in the end, we decided we just had to do it. There were too many Maiden fans getting ripped off with cheap copies, and we don't like to see that."

Magic music from a magic time, as its title suggests, Iron Maiden Live At Donington... is a faithful warts-an'-all recording of the band's entire set from their historic headline appearance before 75,000 ecstatic fans at the world-famous Castle Donington Monsters Of Rock festival, in England, in August 1992. 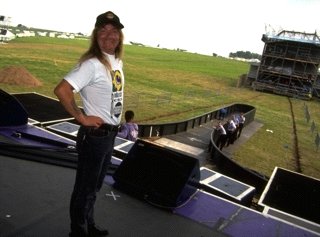 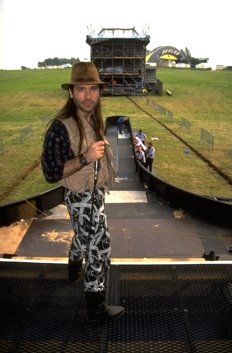 The most prestigious outdoor annual event in the European rock calendar, it was the second time Maiden had headlined the festival (their first record-breaking Donington appearance had been in 1988), and as guitarist Dave Murray the only other member of Maiden to survive from the original line-up of the band that signed to EMI in 1979 recalls:
"It was actually a much better performance by the boys, I think, than the first Donington had been. Don't get me wrong, Donington in '88 was fantastic, but we were so nervous, we were about halfway through the set before we actually settled down and started to play properly. it was a different story. We were still nervous before we went on, but we'd done it before and so we knew a lot more what to expect, and we got straight into it right from the word go. Listening to the album now, I'm amazed at how solid it all sounds!"
Steve agrees: "Musically, Donington '92 was a lot better than the first Donington, I think. Everything was better, not just us but the crowd, as well. They were just fantastic! Which was amazing, because before we went on, we didn't know what to expect, to be honest.

"The first Donington had gone down in the history books as the biggest Donington ever, and we felt that everybody was waiting to see if we would be able to top that. But because we were all a lot more relaxed, I think, it just seemed to go really well right from the start. It was like it started really good and just kept getting better. Really! To the point where I think now it was probably one of the best gigs that line-up of the band ever did!" 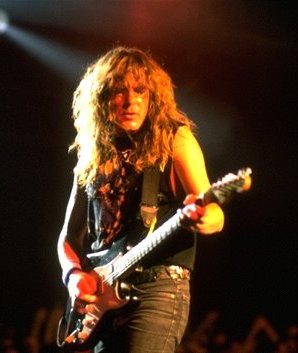 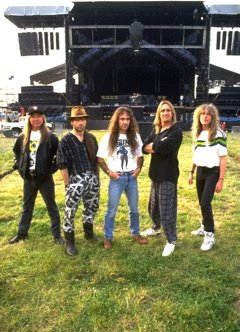 Unexpectedly, as Steve's words infer, Donington '92 was also to be an occasion which their fans would look back on as singer Bruce Dickinson's last really big performance with Maiden in Britain. Six months later, he would announce his decision to leave the band in order to pursue a solo career, and though there would be a further round of 'farewell' dates before the singer finally left in 1993, Donington '92 was where Bruce really took his bow at least to Maiden's British fans.

"Maybe it was," says Bruce, "but don't forget this was before I'd made my mind up to leave and I wasn't thinking at all like that on that day. I agree with the others it was a much better performance by all of us than Donington '88! We were all a lot freer, and I remember I really enjoyed myself on stage that day. But then, if you're English, Donington's always going to be special. And if you're Iron Maiden, well, it's the pinnacle really, isn't it?"

Indeed. And as you will discover from this superb aural-visual document, Maiden were operating at full throttle on stage at Donington that day. Understandably based around material from their then most recent studio album, Fear Of The Dark, which had gone to No. 1 in the UK just three months before, a quarter of the 20 tracks originated from that album 'Be Quick Or Be Dead', which went to No. 2 in the UK when it was released as a single upfront of the album and which opens the show in a blitz of lights and explosions; 'From Here To Eternity', which quickly followed it into the singles chart just before Donington; 'Wasting Love', Bruce and Janick's twisted tale of woe; 'Afraid To Shoot Strangers', Steve's moving lament for the Gulf War dead; and the monstrous, paranoiac title track itself, 'Fear Of The Dark'. 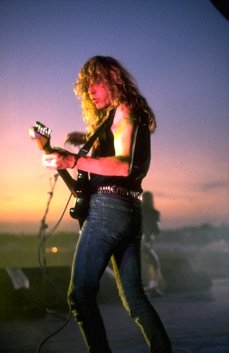 Only the manic 'Tailgunner' and the wonderfully misunderstood 'Bring Your Daughter To The Slaughter' Maiden's first No. 1 single in the UK in January 1991 survive, however, from No Prayer For The Dying, the band's previous studio album to Fear... in 1990. From the album before that though, Maiden's 1988 conceptual classic, Seventh Son Of A Seventh Son, there are blistering live versions of three of the four numbers from that album that were also Top 10 hits as singles: the zany 'Can I Play With Madness?'; the razor-edged 'The Evil That Men Do'; and the weird and catchy 'The Clairvoyant'.

Just one track from the album before that though, Somewhere In Time (1986): the mega 'Heaven Can Wait', still to this day the cornerstone of the live Maiden show and never demonstrated to better crowd-pleasing effect than here, at Donington in 1992. As you can see from the video, it looked like Maiden had most of the rest of the bill that day including members from Skid Row, Thunder, Slayer and Sepultura up there on stage with them for the by now traditional who-oh-oh bit in the middle, where everything stops and the crowd do all the singing for them until it sounds like the very heavens are about to open. And just one track also from both the albums before that, Powerslave (1984) and Piece Of Mind (1983): respectively, '2 Minutes To Midnight', Bruce and recently-departed guitarist Adrian Smith's groovathon classic, and 'The Trooper', Steve's story of a fighting machine that used to be a man, its galloping riff and staccato rhythms just like that of rapid gunfire strafing the horizon. 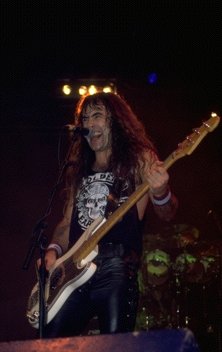 There were three numbers, however, from The Number Of The Beast (1982): the title track itself, replete with eerie spoken intro, mesmerising guitars and fire-and-brimstone vocals, the crowd taking over most of the choruses, little devils all; 'Hallowed Be Thy Name', Steve's maudlin ballad of a condemned man approaching his final hour that explodes halfway through into a mind-bending epic that is still a mainstay of the current Maiden show; and 'Run To The Hills', the track that was released upfront of the album as the first single, thus becoming not only Maiden's first release with Bruce on vocals, but also their first Top 10 single in the UK, when it surprised even their staunchest of fans by zooming into the charts at (lucky) No. 7, in February 1982.

All four remaining tracks date back to original singer Paul Di'Anno-era Iron Maiden. The first, right at the start of the show, is 'Wrathchild', which was originally one of two tracks Maiden had included on the groundbreaking 1980 New Wave Of British Heavy Metal compilation album, Metal For Muthas, before the far superior version that was later released on the band's second album, Killers, in 1981.

Of the final three numbers, all of which make up the encore section of the show, two 'Iron Maiden', their anthem, and 'Running Free', their very first single, were originally included on the first eponymously titled Maiden album in 1980. While the last, 'Sanctuary', was of course their second single in 1980 and never actually released on album until the original studio recording was included on the superb Best Of The Beast collection. 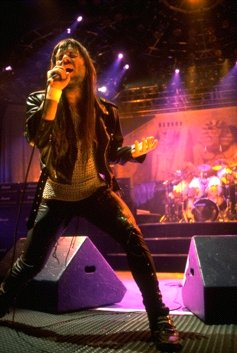 Speaking of the encores, look out also for the special guest appearance of Adrian Smith on the final number of the night, 'Running Free'. Strange-to-relate, but Donington '92 was the first time Adrian had been to see Maiden play since he left the band two years before, and he admits he was "gobsmacked" at how good they were. "They were so good it felt bad, if you know what I mean," he confessed afterwards.

But then, as Adrian says: "Part of me will always be with the band." Most important, getting up on stage that day at Donington in 1992, he said, had given him "the chance to say goodbye to the fans, which I hadn't before."

A special day in every way then, ...Live At Donington... deserves a very special place in the story of Iron Maiden. As Steve so rightly says: "It was just one of those unrepeatable moments in time. I'm really glad we recorded everything for posterity. It was a complete one-off."

Rather like the band who made it, in fact... 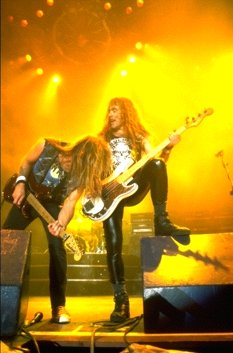 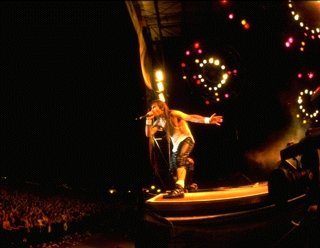 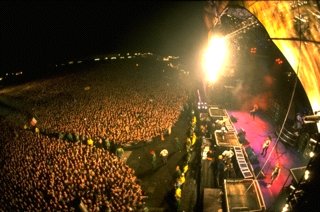 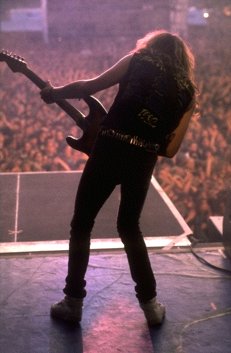 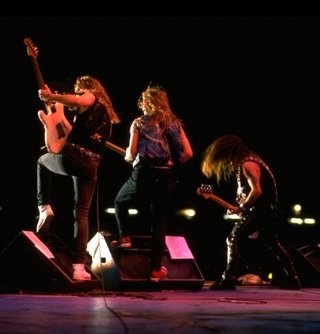 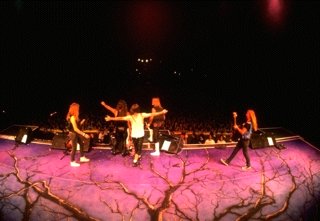 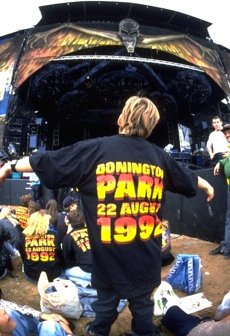 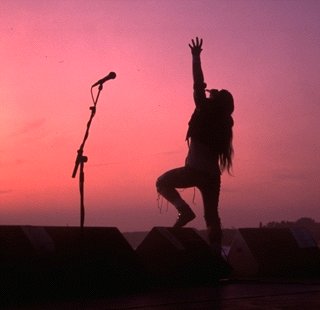