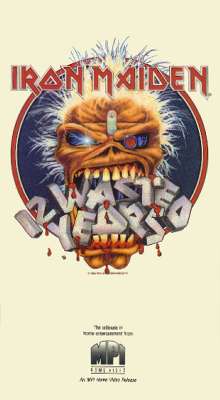 This video documents Iron Maiden's progress from their very beginnings in 1975, when they mainly played pub gigs, all the way to the Somewhere On Tour concerts. These are 90-odd minutes of rare footage and interviews, with full songs as well as excerpts of various other songs, including "She's A Roller" performed by Adrian Smith's first band, Urchin. A great video and a fascinating document about the rise of Maiden.
Be also aware that a bootleg DVD is available, distributed by a Brasilian company (see cover on the right). The sound is advertised on the box as Dolby Digital 2.0 and 5.1, but it is in fact a simple stereo sound, indicating that this is a mere copy of the original VHS on a DVD support. The quality is pretty low and I would suggest that you get hold of the official product on video tape, or simply wait until Sanctuary decide to release it as a DVD.