According to The Local, the sale of IRON MAIDEN's Trooper beer has been halted in Sweden by the country's state-run liquor store monopoly Systembolaget due to legal concerns over the skull and crossbones motif on the label.

"There has been a discussion about the label. The alcohol law stipulates how it can look. We therefore don't yet know when it can be launched," Therese Elmgren at Systembolaget told the Aftonbladet newspaper.

The label on the 4.8 percent-strength Trooper's packaging is taken from IRON MAIDEN' single "The Trooper", which was released in 1983. In 2010, Systembolaget suspended sales of the U.S. beer Founders Breakfast Stout over concerns about the use of a child's face on the bottle's front label.

More recently, in April 2013, a brewery in Denmark was forced to change the label on its Lust beer after Systembolaget deemed the depiction of a topless women to be too sexy for Sweden.

The beer is part of a seven-part Sinner Series, from Danish brewers Amager Bryghus, with each of the sins represented by a cartoon image on different bottles. 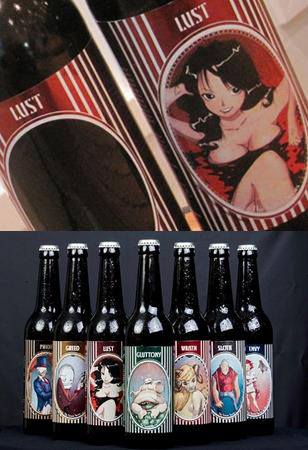