According to U.K.'s Rock Radio, IRON MAIDEN manager Rod Smallwood has revealed the band is planning to tour on Ed Force One next year.
MAIDEN became the first outfit in history to travel round the world in a customized jet during their "Somewhere Back in Time" tour, as detailed in award-winning movie "Flight 666". 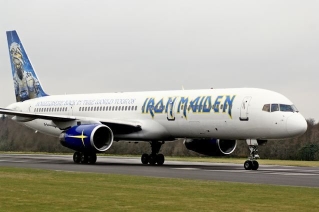 The Boeing 757 carried musicians, crew, gear and guests with singer Bruce Dickinson, a qualified airline pilot, at the controls.

Speaking in the Iron Maiden Fan Club magazine, the manager said that the band will spend the period before Christmas in writing.Than they will take Christmas off and after that into recording. Maiden will finish the album in time to be out next year. Rod also said that the band will visit some new places on the next tour and some other that they have missed on the previous one.