Somwhere Back In Time Tour 2008

IRON MAIDEN announce their most ambitious and extraordinary touring plans ever -- and are very pleased to announce that this will include Australia for the first time in 15 years!
The 'SOMEWHERE BACK IN TIME' World Tour 2008 will be in three sections, starting in February and March 2008 with the first leg encompassing major concerts in 20 selected cities on five continents in seven weeks including India, Japan, North America, Central and South America, and, of course, Australia, opening in Perth on Feb 4 and continuing through Melbourne, Sydney and Brisbane

The tour then continues with more concerts in North America in late May and June before finishing with a third leg in July and August encompassing major stadiums and festivals all over Europe.

To tie in with forthcoming 2008 releases on DVD of the classic 'LIVE AFTER DEATH' and 'MAIDEN ENGLAND' concert videos (more details coming soon) this tour, aptly entitled 'SOMEWHERE BACK IN TIME', will revisit the band's history by focusing almost entirely on the 80's in both choice of songs played and the stage set, which will be based around the legendary Egyptian Production of the 1984-85 'Powerslave Tour'. This will arguably be the most elaborate and spectacular show the band have ever presented, and will include some key elements of their Somewhere In Time tour of 1986/7, such as the Cyborg Eddie.

Tickets go on sale to the public 9am Thursday 27th September, but members of the Iron Maiden fan club get exclusive first access to purchase tickets from 12 noon Thursday 20th September through to 12 noon Monday 24th September. More details soon! 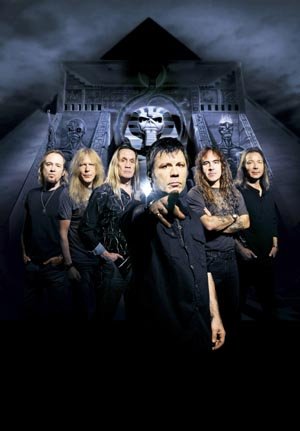