Ed Force One Will Fly Again

Following the news earlier this week that Astraeus Airlines has sadly now ceased operations, IRON MAIDEN singer Bruce Dickinson has disclosed he is currently working on a number of new aviation-related projects, some of which may involve his former Astraeus colleagues. One of his new ventures, which you will already be familiar with, is the upcoming Bruce Air Flight 666 Experience in the Boeing 737 Simulator.

Bruce's commitment to his aviation career remains as passionate as ever, and he wanted to reassure all MAIDEN fans that this includes the continuation of the Bruce Air fan club trips and more touring with Ed Force One at some point in the future. 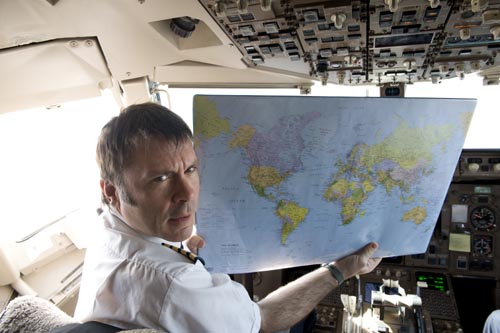 Comments Bruce: "The good news is that Ed Force One will fly again, and we have time to prepare so there should be no problems the next time we need her. In the meantime, I'll get on with the business of flying until MAIDEN are out on the road again!"

IRON MAIDEN frontman and pilot Bruce Dickinson has vowed to resurrect a U.K. airline which has gone into administration.

Bruce Dickinson will be doing more rather than less in the aviation industry following the closure of Astraeus Airlines with whom he was a Boeing 757 captain.

Gatwick-based Astraeus went into administration on Monday, November 21 — and by coincidence Dickinson was captain on the very last flight, operated on behalf of BMI, from Jeddah to Manchester.

Bruce Dickinson said: "I'm amused that the less well informed seem to be portraying me as having to resort to busking on the streets following the closure of Astraeus. The more astute members of my circle are aware there's rather more going on in my world.

"Firstly, I'm already working on a plan to try to save Astraeus, or at least create a new business with new jobs for my friends and former colleagues at Astraeus. This is a serious plan involving people who are very good at their jobs.

"Frankly, now Astraeus has been relieved of the business model imposed upon it by Icelandic owners, who, to be honest, perhaps did not fully appreciate the way the key commercial aviation markets operated, I see the potential for a viable operation should acquisition of the company prove achievable. There is no reason why the original business model, which established Astraeus as possibly the best and most successful organisation in its sector, cannot be resurrected to the benefit of former employees and airline partners and clients alike.

"Secondly, I am also involved in a project which could mean the creation of as many as 1,500 jobs in aerospace in South Wales. That could be a very good news story.

"Thirdly, I'm a long way into the development of a flight training company — Real World Aviation — which will be perfectly placed to help address the aviation industry's perennial challenge: producing new and qualified pilots. For some reason, even in difficult economic times, there is still a shortage of qualified commercial pilots

"I'm extremely upbeat about these opportunities, particularly the potential for a revival, in some form, of Astraeus. The removal of Icelandic ownership from the mix has removed a huge burden and barrier to the redevelopment potential. The enthusiasm is also fuelled by the deluge of messages I received from the second I switched on my phone after landing the last Astraeus flight on Monday, and, of course, the interest of a number of prospective investors.