Due to overwhelming demand, IRON MAIDEN have added a second night at Brooklyn’s Barclays Center on Saturday July 22nd. Tickets go on sale Saturday February 25th at 10am EST via Ticketmaster.com 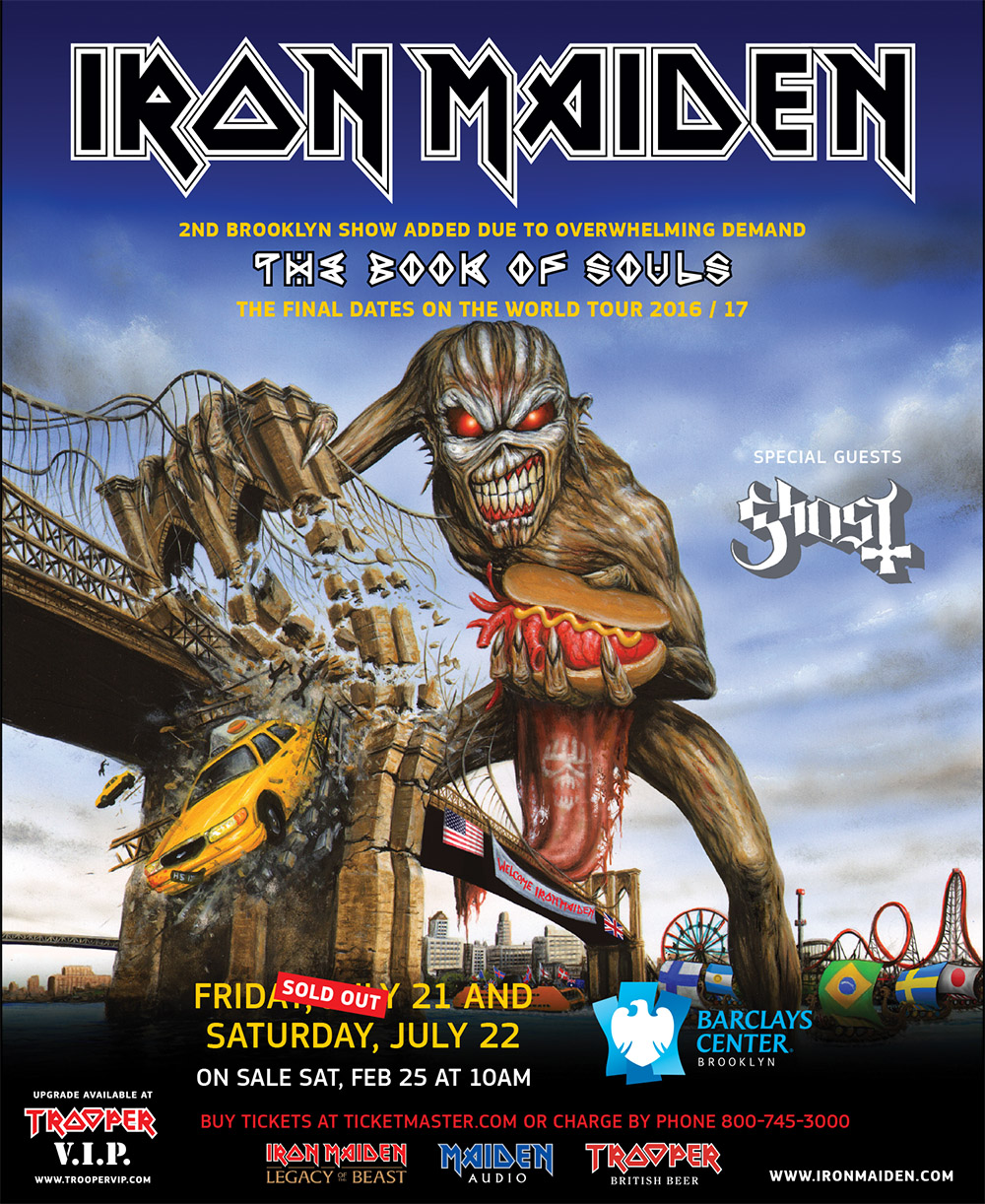 The extra date in Brooklyn on July 22nd will be the final chance for Maiden fans to witness The Book Of Souls Tour as it’s two year, round-the-world odyssey which began in February 2016 in Florida comes to a close. By which time, the band will have played 117 shows to well over 2 million fans in 36 countries, across six of the seven continents travelling well over 100,000 miles.

Tickets for the North American 26 date June/July second leg of The Books Of Souls Tour went on sale nationally a little over two weeks ago on Friday January 27th and were speedily snapped up by Maiden fans with well over 200,000 tickets being sold across the opening weekend alone. The Brooklyn show, the band’s first ever visit here, sold out rapidly with neighbours Philadelphia and Newark already close to sell-out too. There’s been particular fan frenzy in places the band has not played for many years such as Minneapolis which is already sold out with Oakland and Tampa the next to go.

To mark the very end of the tour Maiden have used their coveted city specific event shirt art upfront of the show. The art, by long time collaborator Herve Monjeaud, features Eddie playing havoc with the iconic Brooklyn Bridge amidst hordes of global Maiden fans arriving to witness the event.

Fanclub members will be given the option of an exclusive pre-sale for the 2nd Brooklyn date, along with the chance to enter in the draw to be First To The Barrier.

Prior to the North American tour the band play shows in Belgium, Germany , the UK and Ireland starting on Apr 22. As an update for fans, some tickets are still available for the second night in Oberhausen, Nottingham, Aberdeen, Sheffield, Manchester and Newcastle. All other European shows are completely sold out including the opening show at the massive Sportpalais in Antwerp, both Frankfurt shows, Dublin and both shows at the London O2.

The Book Of Souls is Maiden’s first ever double studio album and their most successful chart-wise to date, debuting at the No.1 spot in over 40 countries around the world and No.4 in the U.S.A.