STEVE HARRIS On Solo Album: 'This Is Not Throwaway MAIDEN Stuff'

Decibel: How long have you been thinking about doing a solo album?

Harris: Oh, forever. Since about ' 93. [laughs] It's been so long, it's ridiculous. I'm just so relieved to get this thing out, really, because it's finally there. I'm really pleased with the results, but it's taken a long while. I think everyone knows that I'm always the one that's the busiest in MAIDEN. When we're not touring or recording, I'm still doing loads of MAIDEN stuff — video editing and god knows what else — so I get a lot less downtime than the others. That's why it's taken so long, really. I was just trying to fit bits in here and there when the other people were available to work on stuff while I was back in the U.K., which over the last few years has not been very often.

Decibel: The press release mentioned that you recorded the album in secret between MAIDEN tours. Why the secrecy?

Harris: Yeah, I suppose that sounds a bit like espionage or something. But we just didn't tell anyone what was going on, really. These days, with the Internet and everything else, it's nice to have a little mystique in something. People weren't expecting this album, and it was a difficult thing to keep under wraps. But it was all done in the quiet, I suppose.

Decibel: Did the other guys in MAIDEN know what you were up to?

Harris: No. Not for a long time they didn't, anyway. I mean, when someone else in MAIDEN is working on another project, no one really talks about it. When Bruce [Dickinson, vocals] or Adrian [Smith, guitar] does stuff, they don't go around broadcasting to the others, and I didn't either. Actually, the only one in MAIDEN who's even heard the album is Nicko [McBrain, drums], because he asked to hear it. So, I played it for him. But the other guys haven't asked to hear it, so I haven't played it for them. Simple as that, really.

Decibel: My impression is that you're the main songwriter in MAIDEN. So, when you were working on this stuff...

Harris: I think I know what you're going to say. This is not throwaway MAIDEN stuff. These are not riffs that I could've used in MAIDEN because, like I said, it was done with other people. As soon as that happens, it's not gonna be used in MAIDEN. And the thing is, I've got a ridiculous amount of ideas that I'm probably never gonna get out the door in my lifetime. [laughs] So, there's no shortage of ideas for MAIDEN. And this stuff is different, anyway. It's more heavy rock than heavy metal, but to me the influences are all from the Well, it seemed like it would portray that idea same era. I have such a wide variety of influences from the '70s anyway. I mean, I think ["British Lion" track] "Us Against The World" sounds a bit like MAIDEN ... maybe "The Chosen Ones" and "A World Without Heaven", because they've got those harmony guitars. But in general it's more riffy, yeah? Well, obviously there's lots of melody, but then there's loads of melody in MAIDEN as well. Sometimes I think MAIDEN doesn't get enough credit for the melody we do have.

The entire interview can be found in the November 2012 issue of Decibel magazine, available on newsstands now. 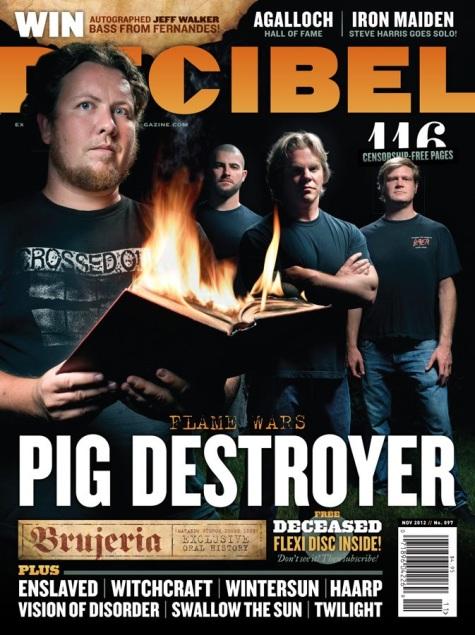