One of the better-known IRON MAIDEN fan sites, MaidenCroatia.com, proudly presents a book by Stipe Juras, one of their founding members and a long-time music journalist and writer, which describes, for the first time in history, the life of the legendary metal musician and IRON MAIDEN founder Steve Harris. The book is called "Steve Harris - The Clairvoyant" and has just been released in English and Croatian, and a Portuguese edition is being prepared for the Brazilian and Portuguese markets (tentatively due in August). 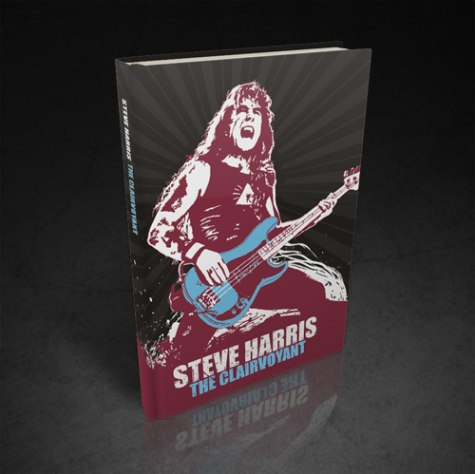 This is the story of Steve Harris, bass player and founder of IRON MAIDEN, told from memories and anecdotes of his fans, friends, associates and family, a warm and intriguing story of a man who boldly followed his vision. It isn't a biography in the classical sense; it doesn't follow Steve's life chronologically, it's more of an account about him from the perspectives of all the interviewees.

"Steve Harris - The Clairvoyant" is available for order on the author's web site via PayPal. It can be shipped worldwide. A special 55-copy series, titled the "Birthday Edition," celebrating Steve Harris' 55th birthday was sold out in a matter of days, but the author plans to sell exactly 666 hardcover copies of the so-called "Number of the Beast" edition, containing a bonus CD with audio interviews with DJ Neal Kay, the person who helped MAIDEN make their way to stardom, and Dave Lights, their legendary lighting designer from the '80s. The book is 300 pages long, A5 format.

Some of the people who were interviewed for the book are Dean Karr, Keith Wilfort, Paul Di'Anno, Dennis Stratton, Clive Burr, Neal Kay, Markus Grosskopf, Blaze Bayley, Mike Kemp, Lauren Harris, Paul Anthony Quinn, Slaven Bilic (ex-West Ham player and Croatian football team coach), and many more. The first copies of the book have just been shipped and already some of the people on the official IRON MAIDEN board were more than thrilled with what they have read.

Stipe Juras isn't planning this to be the only book — he has already announced his plans to write similar books on every MAIDEN member. His next book, "Stranger In A Strange Land", which deals with the life and career of Adrian Smith, will be available for pre-order from December 2011.

Right now, author is in negotiating process with U.S. agents for issuing book on U.S. and Canada market on paperback version. This, hardcover version with bonus CD is strictly limited to 666 copies and will never be reprinted in same format.