British heavy metal legends IRON MAIDEN have released a four-minute video documenting singer Bruce Dickinson's dogfight re-enactment above the U.K. edition of the Sonisphere festival on July 5 at Knebworth Park in Hertfordshire. The spectacular 12-minute air display commemorated the 100th anniversary of The Great War; a 21st-Century tribute to the daring — and often downright dangerous — exploits of both the English and German pilots who ruled Europe's skies between 1914 and 1918. The show featured nine aircraft of five different types, all exact replicas of the planes used in WW1 combat. Bruce flew his very own Fokker Dr1 Triplane, the same model used by infamous German flying ace Manfred von Richthofen, a.k.a. The Red Baron. Also from the German side there was a Junkers CL1. Of the British planes in the show, there was a Sopwith Triplane, a BE2c and a SE5a. The other members of this elite team alongside Bruce were Alex Truman, Dan Griffith, Dave Linney, Ernie Hoblyn, Gordon Brander, Matthew Boddington, Peter Bond, Richard Piper, Vic Lockwood and Will Greenwood. 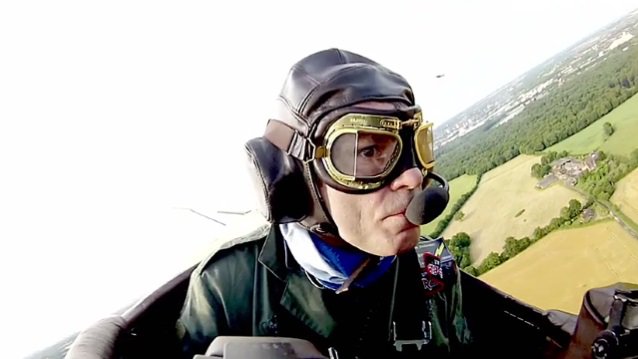 The Great War Display Team performs re-enactments throughout the U.K. and rest of Europe and is proudly sponsored by IRON MAIDEN's very own Trooper beer.