IRON MAIDEN to play in Sofia on June 16th

Sofia is one of the stops marking the end of the super successful Maiden England World Tour in 2014!

The MAIDEN ENGLAND tour continues into 2014 with the band making a welcome return to Bulgaria on June 16th for a show at the Arena Armeets in Sofia. Tickets go on sale Friday Feb 14th from (www.ticketpro.bg).An exclusive first ticket pre-sale for Iron Maiden Fan Club members will run on Wednesday February 12th. Fan club members will also be eligible in the draw to be 'First To The Barrier'. 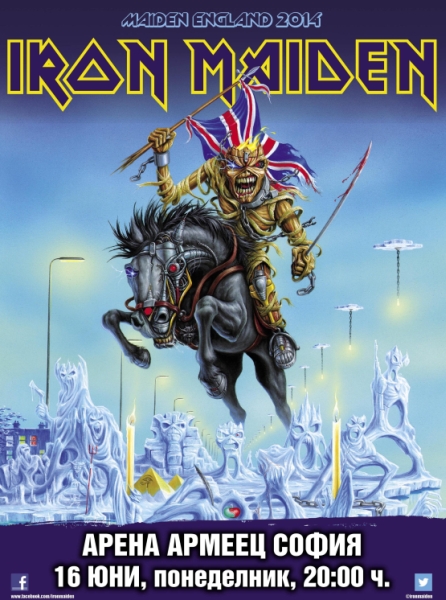 " We always love playing shows in Bulgaria so we are very excited to bring the Maiden England to Sofia! We haven't played here since 2007 and we can't wait to see all our amazing fans again! Although the Maiden England tour is largely based on the 1988 Seventh Son Of A Seventh Son Tour, for the 2014 shows we are changing the set list around a bit to cover the whole of the 1980's more as this may be the last time we play some of these songs live. Of course we'll be bringing the huge lightshow, stage set, various incarnations of Eddie, plenty of pyro and all kinds of other exciting stuff for the fans, and as this is the final leg of the tour it will be even more of a celebration as it's the end of a chapter and we plan to give our fans a show they will never, ever forget!"

"As all our fans know, the DVD of Maiden England is Part 3 in the History Trilogy of the 1980s video/DVD releases so this is likely to be the last time we will tour with a set list based on the '80s, and therefore the last time fans will EVER hear some of these songs played live. With this in mind, for the 2014 dates we plan to change the set list around a little, to make it more equally representative of the whole of the '80s period covered by those three DVDs – Early Days, Live After Death and of course Maiden England, along with one notable exception from the 90's, the fans will know which song I'm talking about! "

The 2014 dates mark the final leg of the MAIDEN ENGLAND world tour which began in the USA in June 2012 and continued into Europe and Latin America, including Rock In Rio, Brazil which sold out 90,000 tickets within hours of the announcement of Maiden's headline show there on the final night of the Festival. The 2013 dates ended in Chile at the Estadio Nacional, Santiago playing to 60,105 fans: "the largest audience by a British band ever" as reported by national newspaper La Tercera. 2013 also saw a return to play to 95,000 fans at UK's Donington Park on the 25th Anniversary of the band's first headline performance at the legendary home of rock in 1988 during the Seventh Son World Tour. This was a record FIFTH time that the band topped the bill at Donington.

When the MAIDEN ENGLAND Tour ends on July 5, at Sonisphere, Knebworth in England, the show will have been seen by well over two million fans across the globe, proving once again the band show no signs of slowing down or losing the formidable passion that has seen them triumphant at the forefront of Metal for over three decades. 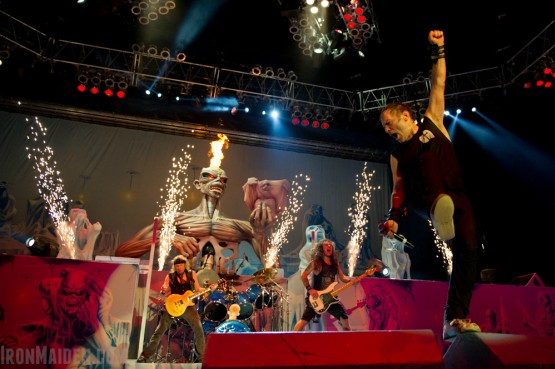