The artwork for No Prayer For The Dying by Derek Riggs

No Prayer For The Dying was basically Maiden's "back to the barn" album. Literally, the band recorded in a barn, with a mobile unit, but the main point was that the guys wanted to reduce the scale over the last two albums and get down to some raw, even savage performances. Most pertinently it was Bruce that turned in the angriest performance, as evidenced by the Holy Smoke single, issued a month before the album hit the racks. Riggs followed suit with the powerful Holy Smoke pay-to-pray imagery. 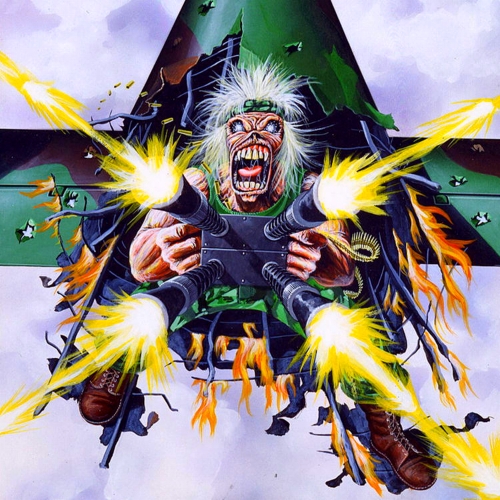 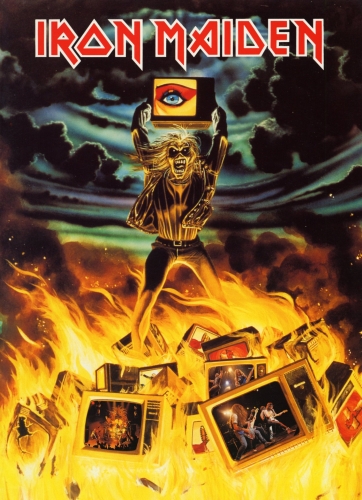 Derek's work for Tailgunner, was a rare piece that hit a snag. "Yeah, there were a couple. The World War II one, Tailgunner, I had painted the whole airplane, and Eddie was too small. Then I think Rod said something about... I got really serious with painting the instrumentation and every bolt on the thing, and in the end, I realized it didn't matter, because he was in the way of most of the instruments. Anyway, I ended up painting the whole airplane. Like most, Iron Maiden's still got it. I think they used it on a couple of things, but they just made it smaller. I don't think it was a very good one (laughs)." Derek was up to his old tricks for No Prayer's second single, a scrappy and somewhat charming song that fit the bare-bones, rock 'n' rollsy theme of the album at large. 'Bring Your Daughter To The Slaughter, there's Eddie standing there, waving his axe around, and there are all these monsters coming out of the pavement, and he's got this girl on his arm. Well, the girl is that cartoon from Who Framed Roger Rabbit, that long thing, the redhead, Jessica Rabbit or something, the lead singer, in the red dress and everything, who was based on Diana Doors, a British film star from the '50s. If you go look at the Diana Doors films, it's obviously based on her. Interestingly, her son now manages the Iron Maidens, the female tribute band. Back to the twilight zone (laughs). And in the dustbin on the right hand side, there's Oscar The Grouch, the Muppet, the one that lives in the dustbin, silly stuff like that."
But Maiden wanted a couple of different interpretations for this single... 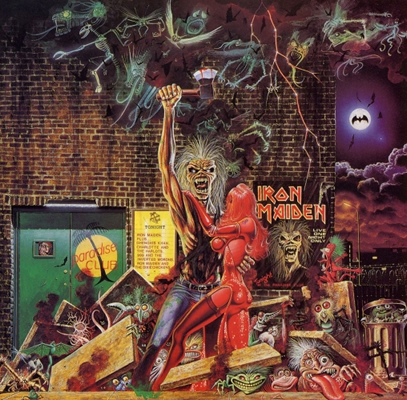 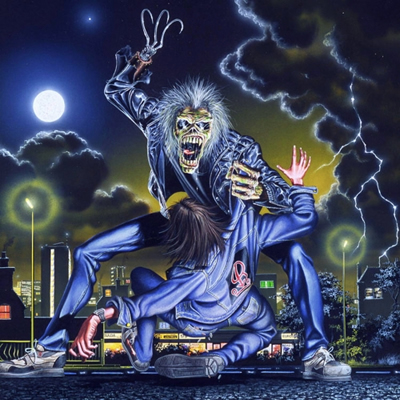 Did Bruce ever get involved? Did he ever give you any ideas?
"Well, let's say I mostly dealt with the manager. He sometimes had an idea or two. Where they came from, I can't say, you know, because I just dealt with him. But like I say, a couple of times I got flown to the place they were recording at, because they wanted to watch me paint or something. But I can't really say where the ideas came from. It might have been the management; it mightVe been the band."
"There were a couple ideas floating around at the time, but I can't remember what it was going to be for. I mean, I had an idea for a painting called Judgment Of Heaven, which was Eddie standing in the middle of this legal court with all these people, with rows of seats going up and up and up, like the theaters they used to do operations in the in medieval times, where they demonstrated what they did. So it would be very steep with a lot of figures. And it would be a very long thin painting, with sort of clouds at the top and God looking down or something. And the floor at his feet would be crumbling away and there
would be a devil underneath him waiting to sort of grab hold of him. And there were all these famous people who had died, Hitler, Mussolini. It was basically a take on the Sgt. Pepper idea, with all these famous people in it. And as you went up the gallery, you would have nicer
people. All the nasty people would be at the bottom. And they were all like sitting in judgment of him. But that just turned out to be such a huge piece of work. I got this sketch in, and besides that, I couldn't get the photo information to do the portraits. And that many portraits would be a nightmare anyway, so I decided I just wasn't going to do it."

But let's not forget, Derek had a lot of Eddies to crank out. "The deadlines I was working to, by the time I finished an album... most bands, they do an album and they put a cover on it and then they think, 'Ooh, I can merchandise that and make a lot of money' But it doesn't work out. The reason it doesn't work out is because people don't realize what happens behind the scenes. When I did the work for Maiden, there would be one album, two singles, you'd have a different cover for the tour program, there would be posters, there would be adverts for the tour, there would be auxiliary artwork. There would be T-shirt designs, there would be event T-shirt designs, and all of these with completely different artwork — but they would all be related to the main artwork. So you could get somewhere in the region of 10, or 12, 15 artworks per album. And there would be magazine covers that we did. And all of this stuff would go in to the media, so you would get a kind of saturation effect. And people try it on with one picture and they wonder why it doesn't work. Because you know, people look back at the Maiden albums, and they see the album and the single, and they go, 'Ooh, that really worked.' And all this stuff went on T-shirts as well, as so it's not a matter of doing one album and two singles. There were ten or twenty pieces of artwork at the end of the day. Some of them weren't great; some of them were just knocked out for one thing, and never appeared on anything else. And there are things have just been knocked up quickly and had been going around the world ever since, and I kind of wish they hadn't, because I didn't spend any time on them (laughs)." 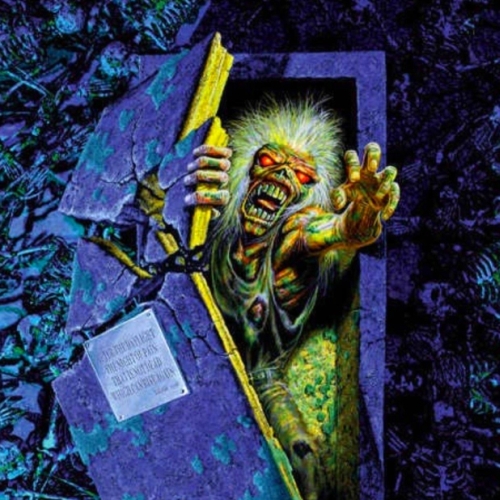 Original Artwork for No Prayer for the Dying from 1990 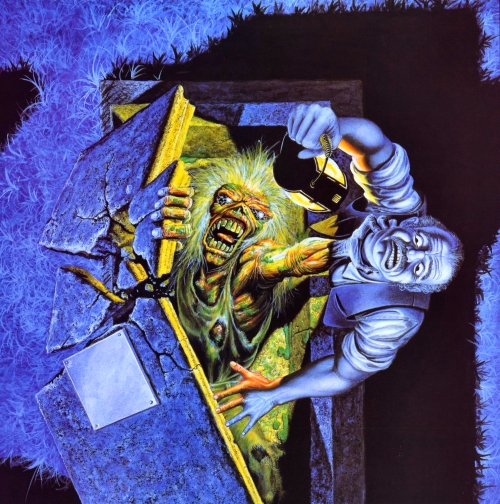 Artwork for the remastered version 1998

No Prayer For The Dying has an original form, featuring a tired looking man, none too appealing in any way, shape or form. Rod had the good sense to recognize this, and requested changes for the 1998 reissue of the album.
"I did that as a painting," explains Derek. "The first version with the man standing next to the gravestone is all painting — gouache, watercolor. Later on, they did a reissue of it, and Rod said he would quite like to change it. Because he never really liked the guy; he didn't think the man worked very well. So at that time I was working digitally. You couldn't have done this any other way. I took it off. I patched up the gaps where the man was, and patched up all the faulty bits which were left from taking the guy off. And then from that, I constructed a new background, which was skeletons lying on a stone floor, and they're all lying in piles of dust — they're turned to dust. That was the background. I replaced the whole thing. I basically had to re-draw 70, 80, 90% of it. It took a lot of removing. Because there was more of it than you see in the final new cover. I had to basically slice it apart and put it back together again. It's the original painted Eddie. I've taken him digitally out of the artwork, the standing artwork, and patched it together with the bits I had, and re-created the background."
Eddie's looking a bit nastier in the reissue as well, a combination of a few touch-ups, like the red eyes, as well as the print job itself.

"The printing can make a hell of a lot of difference to the perception of the artwork — it really can. You color-shift it even a little bit and you can change the whole mood of the picture. Like these skeletons in the background look really rough. But they're not really rough! The blue is more subtle than that in the original. In fact, the slide they sent me, the blue was shifted right up, and I took it back, and the one on my site is closer to the original. As you blast the color out, it loses its subtlety. Whereas, if you take them back to where they should be, OK, so it's not bright blue anymore, but the colors... it actually looks like a nicer picture, more like how I wanted, rather than this luminous crap."
This article is taken from Derek Riggs book Run For Cover