Bring Your Daughter... ...To The Slaughter 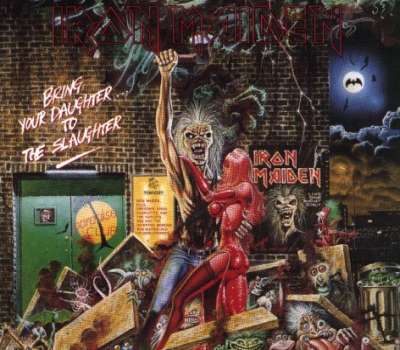 Strangely enough, the Bring Your Daughter... single made it to Number One in the U.K. charts and the song itself received abundant airplay throughout Britain at the time. The lyrical content of the song has triggered many remarks that I was able to hear first-hand when I mentioned that I was a Maiden fan. "How can you listen to a band that encourage the rape of women?" was the most common of these remarks and I have to admit that it was hard to understand why a song with such repulsive lyrics (if taken at face-value) could have become so popular. Maybe the AC/DC kind of sound and style was responsible for such popularity. In any case, that was a weird xmas release quite remote from your average 'Jingle Bells'!

Jessica Rabbit It was brought to my attention that the red woman depicted with Eddie the Scarlet Whore of 'Moonchild'? Charlotte? was inspired by Jessica Rabbit. It does make sense when you compare with the picture on the right.

The cover also shows the door of the Paradise Club in the background. The Paradise Club was a British TV-series of independent 50-minute episodes aired from September 1989 to November 1990. The basic scenario is about two brothers, Frank and Danny Kane (respectively played by Don Henderson and Leslie Grantham, of EastEnders fame). Danny owns the "Paradise Club" and runs a small scale gangster business, whereas his brother Frank is a priest (!).

What has this all got to do with Maiden, then? Well, Bruce Dickinson actually starred in episode 17, called Rock'n'roll roulette and aired on 6th November 1990 on the BBC, in which he is a famous guitarist/singer, Jake Skinner, who's pissed off with the way the record company dictates his life. He's out playing on the street in the opening scene of the programme and is being picked up by some Al Capone-ish guys who brings him to the studio where he was supposed to be recording an album. What happens is that the record company has signed him to a sponsoring deal which says that he should drink only one drink, "Rock 'n' Cola", until the upcoming tour is done. This, of course, pisses him off and he leaves the studio in anger and the rest of the fifty-minute episode is based on his battle against the record label.

In the studio we see "Fraud Squad" which are, Janick Gers on guitar, Andy Carr, bass and Dickie Flitzar on drums, i.e., the band that Bruce used during his 1990 solo tour. In a clip where they're in the studio recording they play a part of the song 'Wishing Well' by Free, which they used to play on the Tattooed Millionaire tour. The recording used in the studio scene was done in CTS studios (where all the James Bond themes were done) on 7th-8th June 1990, when the band was rehearsing for the tour. This studio version of the song remains unreleased. (All this info comes from the defunct Bruce Dickinson Well-Being Network website.)

As a last piece of trivia, note that the bands playing "tonight" at the Paradise Club are:

Iron Maiden
plus...
Genghis Khan
Charlotte And The Harlots
999 And The Inverted Morons
Ron Maiden And The Dixie Chickens

Bring Your Daughter... ...To The Slaughter (Dickinson)
This is the same version as the one that appears on the No Prayer For The Dying album.

I'm A Mover (Fraser, Rodgers)
'I'm A Mover' is a brilliant blues song that was originally recorded by the London band Free on their 1968 album Tons Of Sobs. Free is mostly known for their 1970 great hit 'All Right Now', but Maiden decided to record a lesser-known song, which is in my opinion better than something that has been re-hashed so many times. Blues-lovers will appreciate this songs, while the others may be a bit disappointed. It is also worthy to note that Dave was a huge fan of guitarist Paul Kosoff and even bought one of Kossoff's guitars he saw in a newspaper ad.

The great Free song Free being a major favourite of Dave Murray who still owns an original Paul Kossoff guitar.

Communication Breakdown (Page, Jones, Bonham)
This is a Led Zeppelin song from their 1969 eponymous debut album. Many who know and like the original song have complained about Bruce's horrible singing style and there are comments such as "Robert Plant must be rolling his eyes when he hears this" floating around. I tend to agree with such comments, as it sounds like Bruce is simply bored and has lost his enthusiasm about Maiden. The song is saved by the fact that the original was a very good track, but it probably gives Zeppelin fans the same impression that Maiden fans have when they hear their favourite band covered by Death Metal bands.