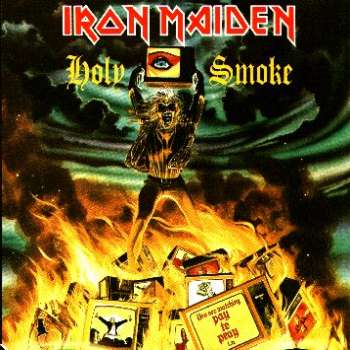 Holy Smoke was the first Maiden single from the No Prayer For The Dying album, and the first single with Janick Gers in the band. It is also the first single following The First Ten Years box set, making it a bit rarer and harder to acquire. The cover picture features the familliar depth and symbolism of Derek Riggs, showing Eddie standing atop a mound of flaming T.V. preacher broadcasts (why not burn the preachers instead?) and about to smash the televised eye of big-brother religion. Maiden recorded a couple of cover tunes as B-sides for this one, after the variety of live tracks and re-recordings that rounded out the previous three singles.

Holy Smoke (Harris, Dickinson)
This is the same version as the one that appears on the No Prayer For The Dying album.

All In Your Mind (Bromham)
Stray 'All In Your Mind' was originally recorded by the British band Stray for their 1970 self-titled debut album. The original version is actually quite different from Maiden's version, assentially in the multipart harmony vocals of the verse and slightly different harmonics in the opening-section. Steve Harris was a big fan of the band used to go to their gigs regularly. "Blanckenheimer", who is mentioned in the lyrics, was an old school friend of Stray's (whose real name was Gerald Blankensee) and later became the band's first roadie (Many thanks to The Iron Maiden Cover Originals page for this info!).

The song seems to advance the somewhat cynical idea that everything is imaginary love, politics and even Chairman Mao! Musically, it has the driving rhythm and heavy guitar that typified early 70s hard rock, perhaps somewhat ahead of its time, yet certainly not remarkable by Iron Maiden standards. Still, it does make for an interesting B-side.

A song from a great band called Stray, this was another of Steve's favourite bands at the time, bass player Gary Giles being an influence.

Golden Earring This is a Golden Earring song from their album The Continuing Story Of Radar Love. It is quite difficult to tell what 'Kill Me Ce Soir' is about it is definitely a political-type of song and it could also be about the assassination of a rock star although it is not clear who. Musically it is quite different from the usual Maiden type of song, and it is a bit surprising that Maiden chose to record it, although it is well-known that Steve was a fan of the band.

Along with Jethro Tull, Golden Earring were probably Steve's favourite band of all time: Rinus Gerritsen also being an influence on Steve. A fine song and also another band I was agent for at the time of 'Radar Love'.