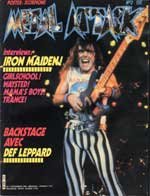 ince the founding of Iron Maiden, singer Bruce Dickinson's arrival wasn't the least of all changes of line-up, and those were legions since 1977!
Originally a four-piece, with Dave Murray (guitar), Steve Harris (bass), Doug Sampson (drums) and singer Paul Mario Day (nowadays with Wildfire after a tenure with More) who was quickly replaced by Paul Di'Anno, the band rapidly became a five-piece with the arrival of a second guitarist, Tony Parsons. Because of musical differences, Sampson and Parsons were replaced by Clive Burr (who has played with Samson) and by Dennis Stratton. After the first album was released, Stratton – there again because of musical differences – was replaced by Adrian Smith, who used to play in Evil Ways and Urchin, with a guitarist called... Dave Murray. New album, Killers, and new line-up change: this time, Di'Anno is replaced, due to problems with his voice, by Bruce Dickinson (ex-Speed, Shots and... Samson). A new album is released and... here we go, this time the drummer, Clive Burr, is out and replaced by Nicko McBrain, freshly arrived from Trust. And this is the story so far...
Despite all these changes and an ever growing success, Iron Maiden never strayed away from their musical line and retained this intense musical power that has been there since the very beginnings. The American tour has just finished, with bands as varied as Saxon, Coney Hatch, Quiet Riot or Axe. But the band has never been so united and Bruce Dickinson seemed to be perfectly happy during the interview he granted me. And he ought to be, as he is the frontman of a band that confirms day after day that it is at the top of Heavy Metal worldwide. 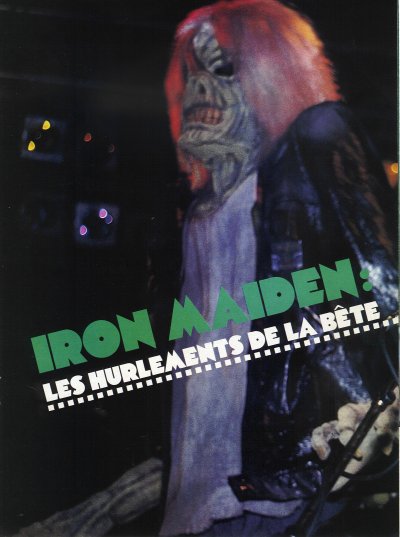 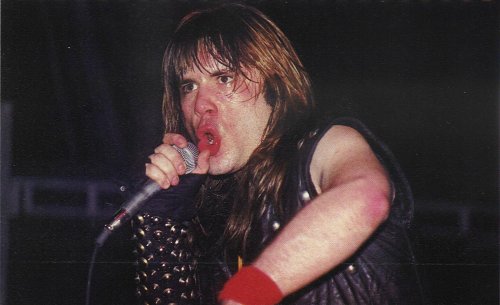 So, back in London already? 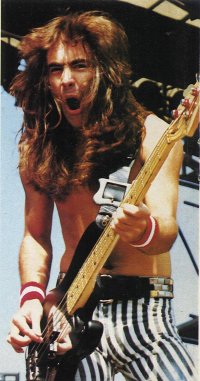 Yes, we just finished the tour and it was really successful. It was the first time that we were headlining in the States and about 20–25 dates were sold-out, not forgetting a fantastic concert at the Madison Square Garden in New York, before 18,000 people. But we've been on the road for the past 18 months, and it's knackering. Moreover, as we were headlining, our gigs were played for almost 2 hours, it was very physical and very intense.

Certainly. As Number Of The Beast and Piece Of Mind are already gold in the States, I think that our last album will go platinum (300,000 copies sold) before the end of the year, which is pretty good for a pure Heavy Metal record (laughs). It's even more satisfying that the American audience is the hardest to get get through.

But this success is less impressive than that of Def Leppard.

That's for sure, but this success is not "compromising" in the way that we have our own sound, and this sound has nothing to do with the "FM" sound of Hard Rock that is aired on American radio. We conquered our audience more with our gigs than with radio airplay. But we remain a fundamentally "European" band and I wouldn't want to change this style. Whatever happens, the European scene is much more important to us than the American one.

What should we think of the rumours indicating that Dave Murray might be about to leave?

That's complete rubbish. However, these rumours were such that, during the American leg of the tour, we had to go on TV to deny all these allegations. No one is thinking about leaving, and the band has never been so united.. 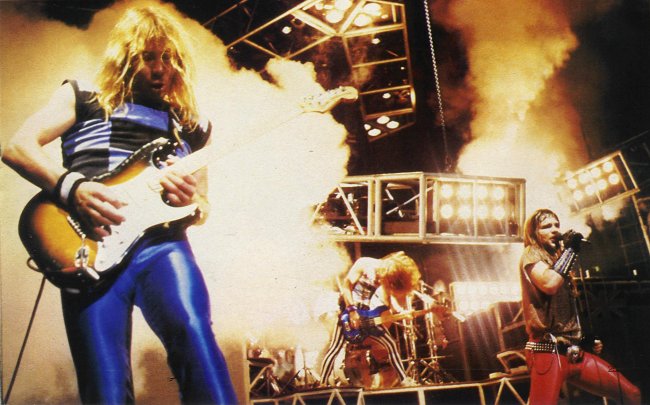 Going back to the gigs, what role do they play for you?

They are a way to communicate with people: communicate our intentions, transmit the feeling behind the lyrics. Once, I received a letter from a French fan telling me that she didn't understand the lyrics of the songs, but that she could understand almost everything just by looking at my face and into my eyes. This is what I call success. My ambition is to carry on communicating with the audience, but this is only possible if every single band member is really happy on stage, which is currently the case.

I think all this comes from the public and the kids' demands. I am a Deep Purple fan, and when I was younger, I used to collect anything related to the band. It's the same for the Iron Maiden fans. But as we are – in all modesty (laughs) – a great band, we have to ensure that anything that is sold with our name on it is of the best quality; that the t-shirts don't fall apart after a few days, that the pictures in the books are of good quality, and so on...

What do you think of Speed Metal, Satanic metal, and the like?

Heavy Metal is just a genre where you find many extremes. At one extreme, you find a very fast Heavy Metal, very close to Punk Metal, and in which the lyrics aren't really important. At the other extreme, there's a slower type of Heavy Metal, heavier, where the lyrics are essentailly satanic, dealing with hell, damnation, or I don't know what else. I find this quite ridiculous, 'cause it catches attention for only a few minutes, then it gets quickly boring. This is why we try not to be too serious, not to lock ourselves in a particular style. We alternate extremes anyway, with short and very fast songs, while others are longer and more elaborate.

But isn't it a problem to renew styles?

We'd have problems if we were stuck with only one musical style. But, as we write lyrics that mostly deal with fantasy, instead of having political themes or other, we are quite free to do pretty much what we like. However, it would be more difficult for us to write another album like Killers than another one like Number Of The Beast. A song like 'Run To The Hills' is also easier to write than something like 'Where Eagles Dare'. And this is why – to me – Piece Of Mind is the hardest album to listen to among the four we recorded. But we all think that's it's our best one so far.

Didn't you get some problems in the States because of the ambiguity of some lyrics?

Yes. The Americans don't have the same sense of humour as the English or the French, and some of them took very seriously some of our lyrics with satanic undertones. Some religious lobbies demanded that stickers be applied on the Number Of The Beast album, warning people of the so-called satanic aspect of the lyrics! Many considered Eddie, our "mascot", like a dangerous character, even a subversive one. As for the reactions to the cover of our last album and the picture with the brain, that was pretty close to McCarthysm. Most of these lobbies are very rich, and they have ads on TV against Rock, condemning all those whose hair's not short, whereas all this isn't really serious.

What does the inverted message at the beginning of 'Still Life' mean?

We recorded it to scare all those fanatics who are so narrow-minded and so hostile to Rock. I can tell you 'cause I don't think that many of them read Metal Attack. It basically means: "Don't meddle with things you don't understand". It was Nicko (McBrain) speaking, but he was completely drunk and had such an accent that, even if you listen to it the normal way, no one can understand this message!

Is it true that you had problems with Frank Herbert, the author of Dune, bacause of the song 'To Tame A Land' on the new album?

That's right. We first wanted to call the song 'Dune', like the book, but he threatened to have the album banned. It's stupid because he'd already sold us the right at a very high price. Anyway, we stayed true to the book. If he only knew how successful the album is, and what publicity this could have been for him...

Do you keep contact with former members of Iron Maiden?

More or less. Concerning Paul Di'Anno, I don't really know what he's doing with his band, Lonewolf, but what he's doing now hasn't got much to do with Metal. As for Clive Burr, after a brief stint with Trust on their last album, he spent a few months with Graham Bonnet's band, and he seems now about to start a new band with ex-members of Praying Mantis.

How about Iron Maiden's future?

Well, in the near future, there's the tour with Michael Schenker opening for us.

Isn't it surprising to find a band like MSG as an opening act instead of a headliner?

I think that for Michael Schenker, this tour is mainly going to be a test following all the changes that occurred within the band, with the arrival of Derek Holmes, who played before with Ted Nugent. But I think that both our bands are complementary, with Michael playing mostly Hard Rock, and us more on the Heavy Metal side. And having MSG as an opening act is for us an honour. Anyway, we never had any problem with any band during our previous tours, so I don't see why this should change.

So, no holidays in sight?

Oh no! the tour only ends at the end of the year, after 8 months of travels around the world. In Januars, we'll start writing for the new album, and the recording will probably start some time in the Summer. Steve Harris will probably write half of the songs, like he did on the last two albums. All this is pretty tiring: touring, recording for ages. There must be other ways to get rich and covered in glory, but isn't life more interesting when you constantly question yourself? 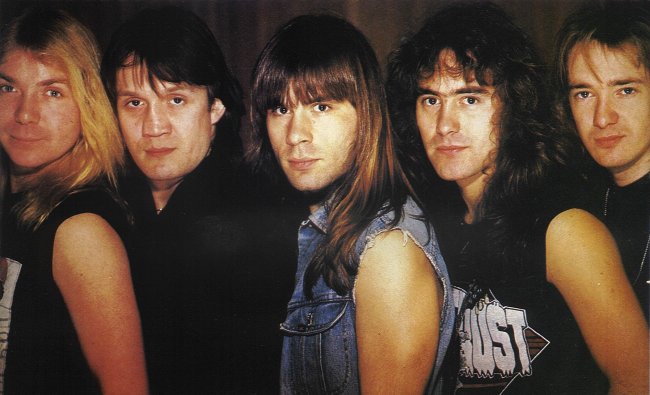