The Piece Of Mind Lyrics 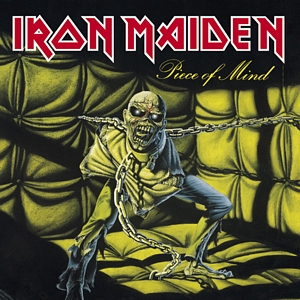 It's snowing outside the rumbling sound
of engines roar in the night,
The mission is near the confident men
are waiting to drop from the sky.

The Blizzard goes on but still they must fly
No one should go where eagles dare.

Bavarian alps that lay all around
they seem to stare from below,
The enemy lines a long time passed
are lying deep in the snow.

Into the night they fall through the sky
No one should fly where eagles dare.

They're closing in the fortress is near
it's standing high in the sky,
The cable car's the only way in
it's really impossible to climb.

They make their way but maybe too late
They've got to try to save the day.

The panicking cries the roaring of guns
are echoing all round the valley,
The mission complete they make to escape
away from the Eagles Nest.

They dared to go where no one would try
they chose to fly where eagles dare.

"O God of Earth and Altar,
Bow down and hear our cry,
Our earthly rulers falter,
Our people drift and die,
The walls of gold entomb us,
The swords of scorn divide,
Take not thy thunder from us,
But take away our pride."
(G.K. Chesterton: English Hymnal)

Just a babe in a black abyss,
No reason for a place like this,
The walls are cold and souls cry out in pain,
An easy way for the blind to go,
A clever path for the fools who know
The secret of the Hanged Man - the smile of his lips.

She came to me with a serpent's kiss,
As the Eye of the Sun rose on her lips,
Moonlight catches silver tears I cry,
So we lay in a black embrace,
And the Seed is sown in a holy place
And I watched, and I waited for the Dawn.

Bind all of us together,
Ablaze with Hope and Free,
No storm or heavy weather
Will rock the boat you'll see.
The time has come to close your eyes
And still the wind and rain,
For the one who will be King
Is the Watcher in the Ring.
It is You.

As the sun breaks, above the ground,
An old man stands on the hill.
As the ground warms, to the first rays of light
A birdsong shatters the still.

His eyes are ablaze,
See the madman in his gaze.

Now the crowd breaks and young boy appears
Looks the old man in the eye
As he spreads his wings and shouts at the crowd
In the name of God my father I fly.

His eyes seem so glazed
As he flies on the wings of a dream.
Now he knows his father betrayed
Now his wings turn to ashes to ashes his grave

4. Die With Your Boots On

In 13 the Beast is Rising,
The Frenchman did surmise,
Through earthquakes and starvation,
The Warlord will arise,
Terror, Death, Destruction,
Pour from the Eastern sands,
But the truth of all predictions,
Is always in your hands.

You'll take my life but I'll take yours too
You'll fire your musket but I'll run you through
So when you're waiting for the next attack
You'd better stand there's no turning back.

The Bugle sounds and the charge begins
But on this battlefield no one wins
The smell of acrid smoke and horses breath
As I plunge on into certain death.

The horse he sweats with fear we break to run
The mighty roar of the Russian guns
And as we race towards the human wall
The screams of pain as my comrades fall.

We hurdle bodies that lay on the ground
And the Russians fire another round
We get so near yet so far away
We won't live to fight another day.

We get so close near enough to fight
When a Russian gets me in his sights
He pulls the trigger and I feel the blow
A burst of rounds take my horse below.

And as I lay there gazing at the sky
My body's numb and my throat is dry
And as I lay forgotten and alone
Without a tear I draw my parting groan.

Take a look in the pool and what do you see
In the dark depths there faces beckoning me
Can't you see them it's plain for all to see
They were there oh I know you don't believe me.

I've no doubt that you think I'm off my head
You don't say but it's in your eyes instead
Hours I spend out just gazing into that pool
Something draws me there I don't know what to do.

All my life's blood is slowly draining away
And I feel that I'm weaker every day
Somehow I know I haven't long to go
Joining them at the bottom of the pool.

Now it's clear and I know what I have to do
I must take you down there to look at them too
Hand in hand then we'll jump right into the pool
Can't you see not just me they want you too.

In a time when dinosaurs walked the earth
When the land was swamp and caves were home
In an age when prize possession was fire
To search for landscapes men would roam.

Then the tribes they came to steal their fire
And the wolves they howled into the night
As they fought a vicious angry battle
to save the power of warmth and light.

And they thought that when the embers died away
That the flame of life had burnt and died
Didn't know the sparks that made the fire
Were made by rubbing stick and stone.

So they ploughed through forest and swamps of danger
And they fought the cannibal tribes and beasts
In the search to find another fire
To regain the power of life and heat.

You killed your first man at 13,
Killer instinct, Animal supreme,
By 16 you had learned to fight
The way of the warrior, you took it as your right.

Sunlight, falling on your steel,
Death in life is your ideal,
Life is like a wheel, rolling on and on.

Through earth and water, fire and wind,
You came at last - nothing was the end,
Make a cut by fire and stones,
Take you and your blade and break you both
in two - break you both in two.

Sunlight, falling on your steel,
Death in life is your ideal,
Life is like a wheel - and it's rolling still.

He is the King of all the land
In the Kingdom of the sands
Of a time tomorrow.

He rules the sand worms and the Fremen
In the land amongst the stars
Of an age tomorrow.

He is destined to be a King
He rules over everything
On the land called planet Dune.

Bodywater is your life
And without in you would die
On the desert the planet Dune.

Without a stillsuit you would fry
On the sands so hot and dry
In a world called Arrakis.

It is a land that's rich in spice
The sandriders and the 'mice'
That they call the 'Muad' Dib'.

He is the Kwizatz Haderach.
He is born of Caladan
And will take the Gom Jabbar.

He has the power to foresee
Or to look into the past
He is the ruler of the stars.

The time will come for him
to lay claim his crown,
And then the foe yes
they'll be cut down,
You'll see he'll be the
best that there's been,
Messiah supreme
true leader of men,
And when the time
for judgement's at hand,
Don't fret he's strong
and he'll make a stand,
Against evil the fire
that spreads through the land,
He has the power
to make it all end.