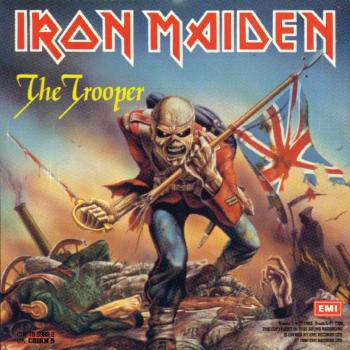 It can be argued that 'The Trooper' is the definitive song from Iron Maiden's golden era, with the single reaching number twelve in the U.K. The sleeve picture is also one of the classic Eddie pictures, which can also be found on many Maiden memorabilia from that era.

While we're on the subject of this impressive picture that all Maiden fans are familiar with, it is quite interesting to point out that it may have been inspired by an illustration that can be found on a Confederate flag whose historical origin remains unclear. Is it just a coincidence or did Riggs knowingly base his battle-hardened Eddie on the original drawing of some kind of skeleton apparently fighting for the South? In any case, Riggs's illustration is far superior to the Confederate one, as you can judge from the pictures below:

The Trooper (Harris)
This is the same version as on the Piece Of Mind album.

Cross-Eyed Mary (Anderson)
Jethro Tull Official Website This song was originally recorded on Jethro Tull's 1971 album Aqualung. I'm not very knowledgeable about Tull, but 'Cross-Eyed Mary' appears to be a song that champions the cause of the poor, although the exact message of the song seems somewhat obscure. It describes the difficult life of a certain Mary, who struggles to survive and remain honest.

The music itself is alright, but doesn't really rise above the common B-side standard. Ironically, this Maiden version received a significant amount of radio airplay in the United States more than most of Maiden's A-side singles!

This shows Steve and Bruce's great love of Jethro Tull. Both are big Tull fans and this is a tribute to them. Interesting enough it picked up airplay in America without any attempt at airplay from us or our label. The label were asking me to let them go to radio with it properly but I wouldn't let them. As a B-side it wasn't representative of what we did, it wasn't used on the album funnily enough it was one of the only things we ever had played on American radio, and it was "just" a B-side.