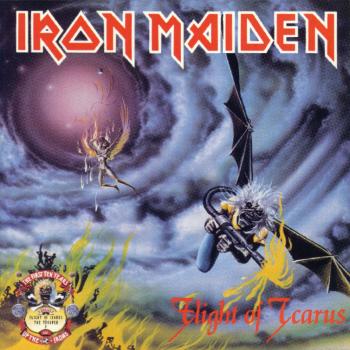 1. Flight Of Icarus (Smith, Dickinson)
2. I've Got The Fire (Montrose)

Flight Of Icarus was the first Iron Maiden single to be released in the United States, where traditionally American record companies do not release singles unless they are virtually guaranteed to become hits. It also was the only Maiden single ever to receive much airplay in America, and rose as high as number twelve in the 1983 Rock Radio charts. Unsurprisingly the single was also a success in Britain, reaching number eleven on the U.K. charts.

Like the Run To The Hills single, the cover picture for Flight Of Icarus is set in the same "hell" location as The Number Of The Beast album cover, complete with the omiously spiralling clouds and leaping flames. However, unlike the Greek myth where Icarus flew too close to the sun, this ill-fated Icarus has instead flown too close to a flamethrower-wielding Eddie.

Flight Of Icarus (Smith, Dickinson)
This is the same version as on the Piece Of Mind album.

I've Got The Fire (Montrose)
Montrose Paper Money 'I've Got The Fire' is a Ronnie Montrose song from his 1974 album Paper Money, which was first recorded with Sammy Hagar (who also wrote the lyrics to the song, but who wasn't credited for some obscure reason).

This is actually the second time that 'I've Got The Fire' has appeared as a Maiden B-side (it first appeared as a B-side on the Sanctuary single in 1980). However, the first version was recorded live with the first Iron Maiden line-up (Di'Anno-Murray-Stratton-Harris-Burr), while this is a proper studio version of the song featuring what is nowadays known as the classic Maiden line-up (i.e., Dickinson-Murray-Smith-Harris-McBrain). In his comment below, Rod seems to confuse the two versions.

Great live cover. We were all great Montrose fans at the time a classic B-side. This was from the second Montrose album 'Paper Money'.