'The Trooper' is perhaps the most famous and recognisable of Maiden's songs, along with 'Run To The Hills'. It describes a British cavalry charge against the Russian army during the Crimean War (18531856) at Balaclava on 25th October 1854. This action was a major blunder of the Crimean War, useless bloodsheds being a theme that Iron Maiden approached again with the song 'Paschendale' on the 2003 Dance Of Death album. Thin Lizzy's 1976 song 'Massacre', that was covered by Maiden on their 1988 single Can I Play With Madness, was also inspired by this battle.

The Charge of the Light Brigade was led by Lord Cardigan and his light cavalry. The Russians had taken outposts and redoubts heavily-armed, well-defended, strategic positions and had began to make off with the naval guns and ammunition which had been used in these redoubts previously occupied by the Turks (then allied of the British). The loss of guns was a clear sign of defeat which Lord Raglan, then in charge of the sector, could not allow. When he saw what the Russians were doing, he ordered that the guns should be retaken. However, the order was very vague and hastily scribbled, not mentioning which guns, or where they were. Although Raglan on the heights and having an overview of the area thought it was obvious, the cavalry in the valley could not see the Russians with the British naval guns because they were over the top of the ridge. Consequently the cavalry was baffled: the only guns they could see were those before Sebastopol, two miles away, where there were gun emplacements down both sides of the valley and across the end.

Based on the Crimean war with the British against the Russians. The opening is meant to try and recreate the galloping horses in the charge of the light brigade. It's an atmospheric song. 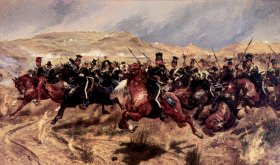 Cardigan assumed that his brigade was to take the guns at the end of the valley. No commander should ever order cavalry to attack heavy artillery. Still, orders were to be obeyed. The Light Brigade, comprising 670 men, set off down the valley at a canter with Cardigan fifty yards in front of them. When the messenger who had brought the order realised that Cardigan was going in the wrong direction and tried to stop him, Cardigan simply refused to listen. The soldiers in the first Russian batteries did not believe their eyes so they did not fire right away. But then the massacre began. When the charge was over, 195 men were left. Cardigan was the first in and first out, and he was unscathed; he left his men to find their own way back. The charge was a massive blunder and caused irrecoverable loss most of the light cavalry was gone.

The Trooper single This charge, symbol of the bravery of men and of the mindlessness of some officers, was immortalised by Lord Tennyson's (18091892) poem The Charge Of The Light Brigade (first published on 9th December, 1854 and reprinted in 1855). This poem was one of the most popular of the Victorian period and one critic of the time said: "The poem has become almost too popular for discussion; it is the one stirring, galloping piece of energy which all shades of mind and sympathy seem to admire alike." The same comment is also valid for the Iron Maiden song, which is a perfect example of Harris' riff-based style of music. The power and emotion of this song make it an all-time classic, and one of the best Maiden songs ever.