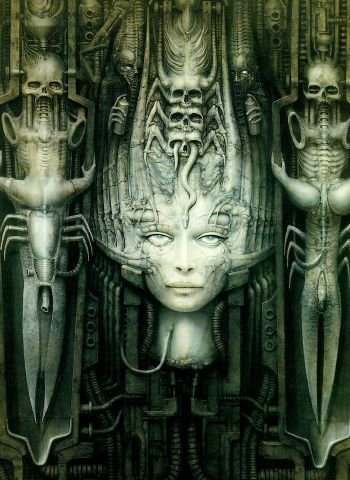 'Revelations' is a song with a double meaning. Of course, it refers to the christian mythology, but at the same time, it is possible to reverse the basic idea and it takes an entirely different meaning if you look a bit further.

The works of Aleister Crowley (18751947) influenced the writing of this song (as it is also the case, and in a more obvious way, with 'Moonchild' on the 1988 Seventh Son Of A Seventh Son album). As an atheist philosopher, he thought that, by concentrating all his energy only into his brain, man could influence and change the way things were. He was describing religions as deceitful, useless and promoting passivity, and to him religion lead directly to the brain of thoughts. According to Crowley , man was supposed to struggle against nature in order to exercise his brain and the powers that it contains, and attain by this means supreme felicity.

Bruce Dickinson wrote 'Revelations' in reference to this theory. Beyond the biblical meaning, there is the principle that man can reveal himself to himself. There is therefore a pun here because there is the christian theory on the one hand, and something religion wants to keep quiet on the other.

The first verse is an excerpt of an English hymnal, written by G. K. Chesterton (18741936), that Bruce learned at school. The song itself is in three parts.

The first part is made of this hymnal that Bruce chose because he thought that there was some sort of vision in it. Although the text was written in the 19th Century, the description it contains corresponds eerily to what is happening nowadays. Bruce also states that, "there's a lot of money going around in our society, but, in fact, the more money you have and least likely you are to be really happy." The last verse, "Take away our pride", is the central piece of the mystical universe. The main hindrance to communication and happiness is made of selfishness and misplaced self-esteem that divide people among themselves..

The Hanged Man The next two verses refer to the Hindu philosophy. "Just a babe in a black abyss" alludes to Aleister Crowley, the word "babe" corresponds to the human being and "black abyss" means a hopeless world. "No reason for a place like this" shows the nonsense of man's existence on Earth if hope doesn't exist anymore.

Then we come to the "secret of the hanged man". In popular Hindu beliefs, the hanged man is a sign of good luck. This is why the song states that he has "a smile on his lips": this is what his secret is.

In the third verse, the most important line is: "The venom that tears my spine". In Yoga, there is a snake called Kundalini (see also here) who is supposed to live at the base of the spinal cord of every person. During orgasm or intense meditation, a spiritual entity is created, the "Samadhi", symbolising the transcendental union with God. At that point, the Kundalini is set free and crawls up the spine up to the brain where he releases his venom. The union between the venom and the brain substance then promotes a union with God.

The next verse, "The Eyes of the Nile are opening" imply then that a whole universe of possibilities is open as soon as the venom makes its way into the individual. Whereas the Bible considers the serpent to be evil incarnate, the Hindu philosophy associates it with creation and extasy. The serpent has therefore here a positive and constructive aspect.

Pauline Lim Serpent's Kiss (Oil and acrylic on board 5" x 5", 2002) The "Serpent's kiss" has also been the topic of many of Crowley 's philosophical discussions. Then, "The Eye of the Sun" is mentioned, as the sun is the symbol of creation, representing the masculine side of life. The feminine side appears a bit further in the word "Moonlight", the moon being the symbol of feminity. The complete sentence, "Moonlight catches silver tears I cry", closes the full circle, as silver is the colour of the sun. We find therefore here both male and female entities, and they cannot be separated.

In fact, this philosophy considers the universe to be a dual, binary world where everything only exists because of its opposite. In other words, there is no manichean dichotomy like in the christian school of thoughts where Good and Evil are kept apart and Evil should be eliminated. Only the christian system of values is monolithic, whereas all the other great philosophies are based on a duality of notions, like the Ying and the Yang in China , or the Jewish Kaballah. Bruce handles all these concepts efficiently and with caution because of their complexity.

'Revelations' is quite a cryptic song a first sight, but it shouldn't prevent us from admiring also its musical value that makes it a little masterpiece and a great classic of Maiden.

To me it's sort of a heavy version of the Wishbone Ash feel. 'Revelations' comes together more live. That tends to be like that with us. Usually the numbers are better live than on record. That has to do with the feel of the songs. Most of them were written to be played on the stage. They're not really for the recording studio.