The Piece Of Mind Album 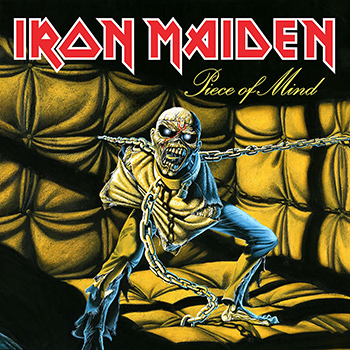 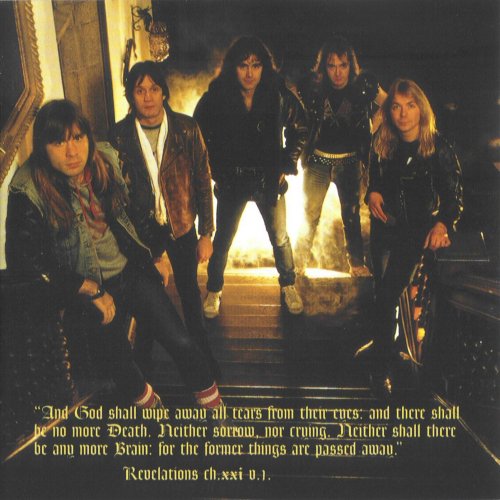 And God shall wipe away all tears from their eyes;

and there shall be no more Death.

Neither sorrow, nor crying.

Neither shall there be any more Brain;

for the former things are passed away.

What does it mean? It might be alluding to the eastern concept of nirvana, which when achieved features the extinction of individual consciousness and desire (hence, no 'Brain'). It could also be referring to Christianity, implying that it is for brainless morons. But it is most probably referring to the lobotomisation of Eddie... you can see on the album cover that he has had is brain removed and his skull is now screwed shut.

The original idea for the cover was to kill Eddie, but the band thought that it was too extreme. The trepanation is, according to a Bruce Dickinson interview, an allusion to an old Aztec ritual during human sacrifices. The album was originally going to be called Food For Thought, but they finally decided to give it a more subtle name.

Commercially Piece Of Mind was a huge success, and was even voted the number one metal LP of all time in a KERRANG! magazine poll. It was also the first album with drummer Nicko McBrain, completing a line-up which would last through four studio albums the longest stable line-up in Maiden history.

The comments by Steve Harris were taken from an interview with John Stix in July 1983.

This album was also released as a Picture Disc (with different cover) only for USA and with the bonus track "Cross Eyed Mary".

No synthesisers or ulterior motives.

A Very Special Thanks to Clive Burr good luck mate.

To all the Headbangers, Earthdogs, Hell rats and Rivetheads everywhere THANKS.