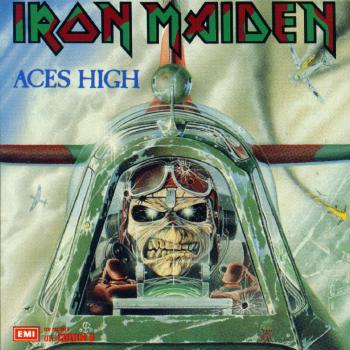 The Aces High single made it to number twenty in the U.K. charts. The front cover picture is rather great and the back cover picture is also interesting, showing the side of the Spitfire where has been painted the plane's recent kills, which are the five Eddie faces from the five preceeding albums. So, Eddie has shot down his own past incarnations. Perhaps this is implying that Maiden's music continues to improve on itself, which is arguably true for those first five albums.

Aces High (Harris)
This is the same version as on the Powerslave album.

King Of Twilight (Nektar)
This song was originally recorded by a progressive rock group called Nektar formed in Hamburg by British band expatriates who lived and recorded in Germany. The Maiden cover version of the song is actually a merging of two separate songs, 'King Of Twilight' and 'Crying In The Dark', from the 1972 album A Tab In The Ocean.

It is quite a good song and features some very interesting drumming and bass work by Nicko and Steve.

Steve was a big fan of this British band who based themselves in Germany. I recall when we first toured Japan, in interviews Steve talked of his love for Nektar which led to a big increase in their sales in Japan due to the interest generated.

Number Of The Beast (live) (Harris)

The single's sleeve does not mention where this live version of 'The Number Of The Beast' was recorded, but I've been told that it was at Dortmund on 18th December 1983, the same version that appears in the 12 Wasted Years video.