Flash Of The Blade 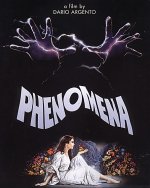 This is a swordsman's song, undoubtedly inspired by Dickinson's love of fencing. The lyrics hint of a young swordsman in training, so that he can avenge the murder of his family. It's a good song with a very catchy intro, but for some reason it hasn't been played live in concert.

However, this song appears on the soundtrack of Dario Argento's 1985 film, Phenomena (also known as Creepers in its largely cut US version) about a young girl, with an amazing ability to communicate with insects, who is transferred to an exclusive Swiss boarding school, where her unusual capability might help solve a string of murders. Although the film is pretty low-grade for Dario Argento, it has the advantage of a good soundtrack to compensate a rather cheesy story, including artists such as Iron Maiden or Motorhead. You can check it out by watching the trailer here.