'Aces High' continues the tradition of great combat songs that began with 'Invaders' and 'The Trooper'. It's a British fighter-pilot's view of a defence against a bombing raid during the Battle of Britain, the first all-aerial battle to be fought and which took place between 10th July and 31st October 1940 . It's also another excellent album opener, and has one of Maiden's best choruses. Its inspiration comes from another great piece of bravoury in military history, showing the dedication of men to serve the cause they believed in and what Churchill called "their finest hour.".

Back to lyrics of the song, it is a bit surprising that the Flak should be mentioned, as it is the abbreviation of Flugabwehr Kanon (the German "Triple-A" Anti-Aircraft Artillery) and the pilot, obviously British, could not hear it on his own airfield. I suppose that the word is shorter and blends better with the rest of the lyrics; besides, this word is nowadays integrated into the English language and, for those who are not familiar with it, the expression "to take the flak" means to encounter heavy cristicism or opposition.

A lot of aviation jargon is also used to create an appropriate mood for the song. "Scramble", for instance, means an emergency take-off and is still used by today's air force pilots. Likewise, the pilots use a clock reference to orientate themselves, the nose of their plane being at 12 o'clock and the tail at 6 o'clock . The "bandits" another common expression meaning the enemy arriving at 8 o'clock are therefore coming in from behind and toward the port (left) side of the Spitfire. "Beware the Hun in the sun!" 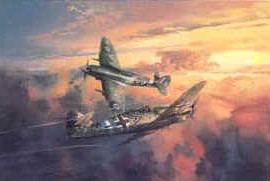 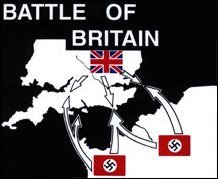