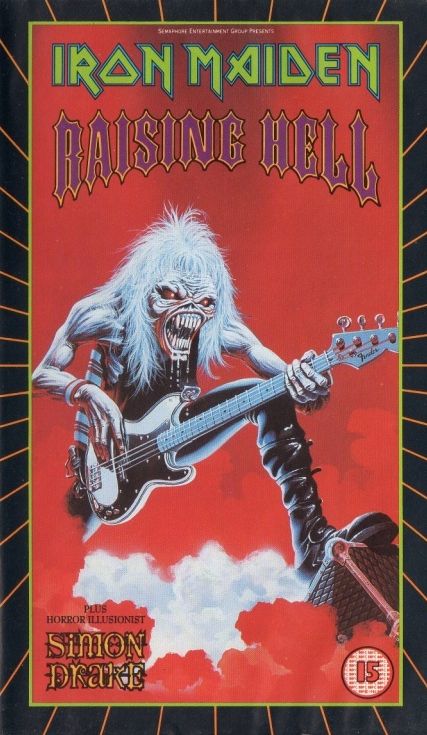 Raising Hell is a concert video by the heavy metal band Iron Maiden, filmed on 28 August 1993 at the Pinewood Studios in London, England and broadcast live on pay-per-view television in the United Kingdom and on MTV in North America. The video was originally distributed on VHS and Laserdisc by BMG Special Products in the US and EMI in the rest of the world. It was subsequently released on DVD several years later in the US.

Raising Hell is an interesting video, combining an Iron Maiden concert with a Simon Drake horror magic show. Rather than having an actual plot, as logic would have dictated, it is mainly just a Maiden show with magical tricks performed between the songs. There were apparently two stages, one for Maiden and one for Simon Drake who portrayed himself as an evil leather-clad magician. Most of his "magic" involved killing his beautiful assistants and even members of the audience in extremely grotesque ways for various trivial offences such as offering a lighter that didn't work or shouting for more Iron Maiden music. However, a couple of the tricks were sort of alright. During the middle of one song, Drake's minions drag Dave Murray from the Maiden stage and proceed to cut off his arms about halfway below the elbows. Drake then takes Murray's guitar, holds Murray's severed hands at the wrists just in time for the hands to play Murray's guitar solo for the song. And for the final "trick" of the show, Bruce Dickinson is dragged off Maiden's stage and forced into – you guessed it – an iron maiden, where he is impaled by hundreds of spikes. Eddie then decapitates Bruce's body and places the severed head on the spike that impales Simon Drake.

Overall, the Iron Maiden show was quite good – even if Bruce Dickinson looks somehow bored – while the Simon Drake show was a bit over-violent and pretty cheesy. It would have been better if they had designed some sort of a plot and turned the show into a story. But if you like both Iron Maiden and macabre horror, you may really enjoy this video anyway.

From the back of the video box