The Rock In Rio Video 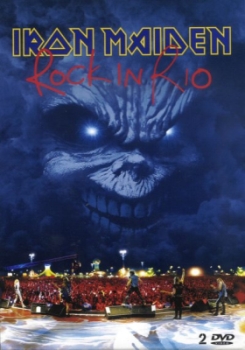 This is the visual version of theВ Rock In Rio live album and the commentary of the album also applies to the video. Visually, this is quite simply a Maiden concert: full of energy and stage effects. The only complaint I might have concerning this visual feast is that the images change a bit too fast and I would have liked to see the cameras stay a bit longer on each musician instead of those split-second changes of angles.

The second disc shows us a more personal aspect of the musicians. It is a surprise for no Maiden fan to know about Bruce's passion for fencing or Steve's for football, but many will discover the quiter sides of the other four вЂ" who would have thought that Adrian was a keen angler? The "Day In The Life" is also an interesting documentary on what it's like to be in such a massive international rock band, and Ross Halfin's photographs are also pretty nice.

The "Special Features" disc also contains some hidden bonus. Try moving the cursor over the menu screens and you will discover an Eddie smiley face appearing on the screen. Just click on it, and you'll discover a little word from Kevin Shirley, as well as a surprising couple of love-monkeys! Other hiden features include Bruce pratting around in his hotel room, Nicko discussing a river and a golf game, Dave and Ross discussing drinks, Adrian, Dave and Steve having fun with tennis rackets and the ups and downs of being in Iron Maiden. The interest of all this is pretty limited though.
All in all a really nice DVD that is recommended to all Iron Maiden fans
Disc 1: Live Concert

Ghost Of The Navigator

The Evil That Men Do

The Number Of The Beast

Hallowed Be Thy Name

Run To The Hills

A Day In The Life